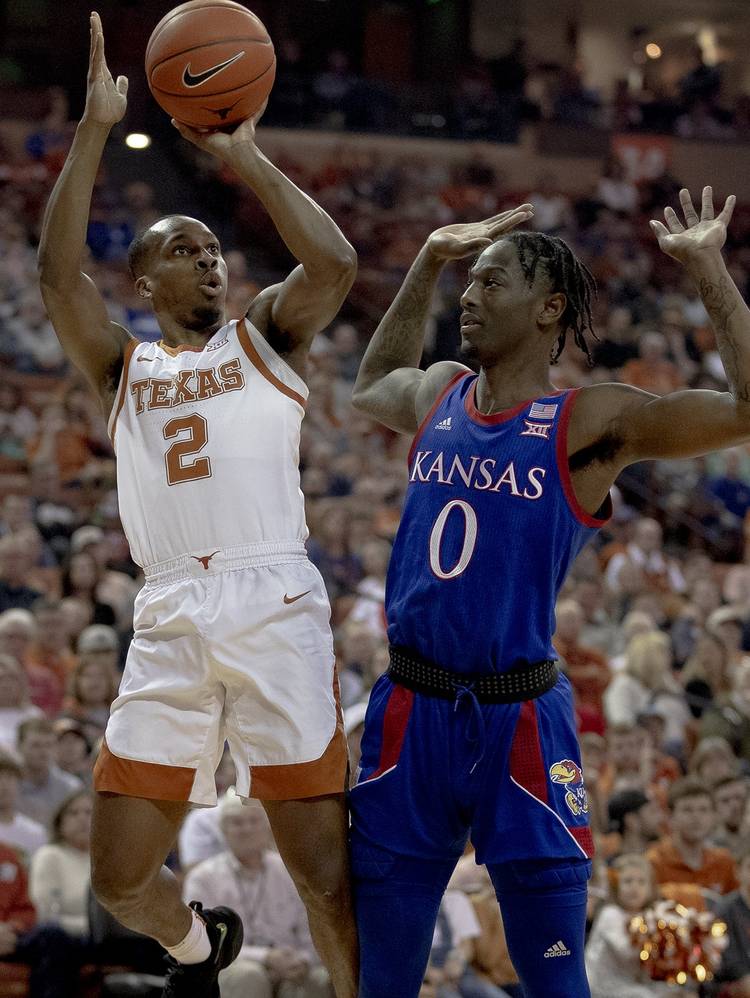 Sequels are the in thing.

Almost seems like you can’t go to a movie house without seeing the next incarnation of a bunch of actors in tight-fitting costumes in the next Marvel superhero film or another Faster and Furiouser or Rocky 22. There’s no escaping them.

And the remake narrative may get a little tiresome, none more so than the tedious script that the underachieving Texas basketball team relives over and over again.

Such was the case Saturday at the Erwin Center when Kansas out-Kansased the Longhorns down the stretch, doing what Kansas teams do and finishing with a flurry to escape the home team’s spirited upset bid with a 66-57 victory.

“This is a game you got to seize,” said a depressed Shaka Smart. “You got to grab it.”

Smart’s Longhorn club has plenty of talent, emerging and otherwise, although it doesn’t quite have the dynamic, take-over-a-game alpha dog like Kansas’ sophomore guard Devon Dotson and shutdown defensive wizard Marcus Garrett.

It may not have the monster impersonating a basketball player in 7-foot, 255-pound Udoka Azubuike, who ran things in the paint, but it does have a Jarrett Allen starter kit in a slender but supremely athletic Jericho Sims.

The Longhorns have another great frontcourt player in Sims, who, while no lottery pick, could be playing at a three-and-done level of late and looks masterful down low. Kansas coach Bill Self called Sims “the best athlete in our league.”

They’ve got a growing stretch four in sophomore Kamaka Hepa, a versatile player in Gerald Liddell, an improving shot-blocker in Kai Jones and a shooter in Jase Febres who has added other elements to his game without the ball in his hands.

Yeah, Texas has a lot of the necessary parts.

But not the biggest part you need.

Killer confidence down the stretch. Belief that a play will be made. Mad maturity that lifts teams in the final minutes.

The kind of stuff the Longhorns lack. They just can’t get over the hump.

“It’s being your best in the last five to six minutes of a game when the score is tied at 54,” Smart said. “We weren’t able to do that today. Our last two games, they drove (aggressively) who we wanted to be. We had that same identity in the first half. We didn’t in the second half.”

And that comes down to coaching, to getting that across to the players, to drawing up the out-of-bounds play to find an easy bucket, to instilling that indomitable will into a team and finding a way to finish.

It’s what this team has lacked.

Most of the 11,762 at the Erwin Center have seen this act before. Too often.

Talk about Groundhog Program. That’s what you have in a coach who’s cerebral but not necessarily cunning, who is 83-71 without a single NCAA Tournament victory. Who else is there to blame, unless it’s the Houston Astros’ fault?

This could have been huge. Maybe even season-altering or better yet program-shaping for a coach who’s desperate for a big win or 10.

It would not have been a stretch to think this could have been the biggest win of Smart’s five-year career in Austin, partly because there haven’t been that many big wins and because Kansas was there for the taking.

Win this one Saturday against a vulnerable Jayhawks team that connected on just two treys the entire game, and who’s to say the Longhorns couldn’t follow it up with a road win over a West Virginia team still hurting over getting knocked off by lowly Kansas State.

It was all there.

When Texas and sixth-ranked Kansas were locked in a tight 54-54 game with 4:50 left after the fifth of Sims’ six slam dunks on the day, it was on.

But the Jayhawks turned the Longhorns off, outscoring them 12-3 with seven critical points from all-star guard Devon Dotson and watching Courtney Ramey miss a trey and a free throw, Andrew Jones miss the front end of a one-and-one chance and Matt Coleman III fail to score on a drive to the bucket and a desperation bomb. Texas scored one field goal those last five minutes.

“They’re a good team,” Ramey said. “They made some good shots, and we didn’t finish possessions well, and we didn’t secure the ball well. We’ve got to get past hard.”

Winners find a way to finish.

If you check, you’ll find Smart’s 12-5 team mired in the Big 12 standings with a 2-3 league record, having beaten two teams with a combined 1-9 mark.

Texas wouldn’t necessarily have stolen one at the Drum. It just needed to play sound defense as it had most of the game, make its free throws and get the ball to Sims in the paint.

Smart laid the blame on his guards.

“Garrett and Dotson went and won Kansas the game the way they attacked,” Smart said. “When you play in the Big 12, you’re going to play against guys like that. It’s something our guys have to get better at. Their guards outplayed our guards.”

It’s no coincidence that Kansas has now won 12 of its last 13 meetings with Texas. The Jayhawks expect to win. And usually do.