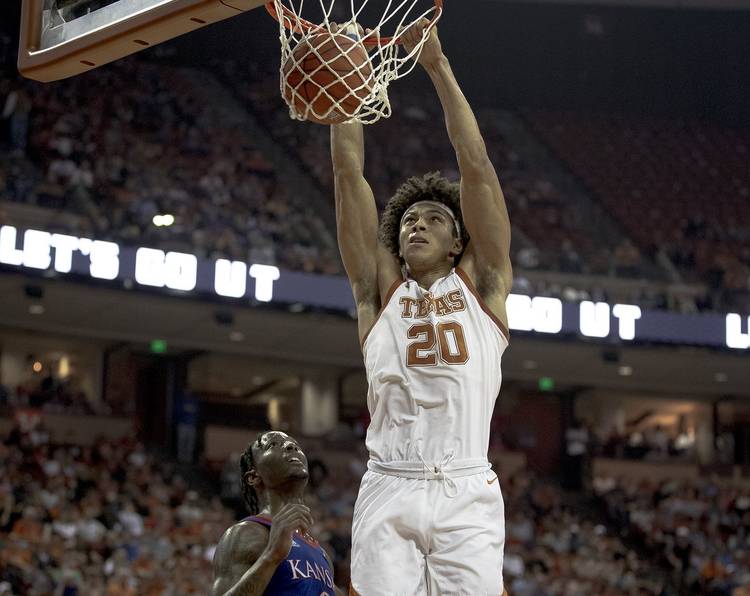 After Saturday’s 66-57 loss to No. 6 Kansas, a game in which the Horns made only 1 of 9 3-pointers in the second half, Sims put yet another stamp on the growing belief that he is Texas’ most dangerous player. And while the guards are seeking to discover their second-half stroke in a quick turnaround game at West Virginia on MLK Day, they would be well served to get their big man more touches.

Sims won’t verbalize it — he doesn’t say much of anything — but he needs the rock more than he’s getting it. That is, if the Horns, at 12-5 overall and 2-3 in Big 12 play, are to figure out a way to get into the NCAAs this spring.

After he went dunk for dunk with Kansas’ 7-foot, 255-pound post Udoka Azubuike, it’s time to maximize Sims’ scoring ability before the 2020 season becomes the latest shop of horrors for the Horns and coach Shaka Smart.

So feed him, Seymour. Feed him, Matt Coleman. Feed him, Courtney Ramey. Feed him, Jase Febres. Feed him, Andrew Jones. Feed him as if he hasn’t eaten in three weeks. Make sure he tops the career-high 14 field-goal attempts we just witnessed against the Rock Chalks.

Texas must figure out the right inside-outside mix because Sims has become must-see hoops on a guard-driven team. Perimeter play is important in today’s era, but those quality looks from distance will increase if Sims, who scored a career high 20 points Saturday, continues his path of destruction in the paint.

“I think he’s the best athlete in our league,” Kansas coach Bill Self said.

Sims is in full bloom, and Texas must continue to pound the ball inside to the soft-spoken post, who dunked six times, including an alley-oop finish early in the second half on which his arms appeared to be a foot over the rim. If coach Shaka Smart knows what’s best for this team, then Sims’ shot attempts should number in the 15 to 20 range the rest of the way.

Saturday was just the second time in 86 career games he has attempted at least 10 shots in one game, the other coming two weeks ago when he was the only player to show up in that 59-44 loss at Baylor. It concluded a three-game tear on which he averaged 12.3 points on just nine attempts, along with 13.6 rebounds.

Now it should be mentioned that Jericho wasn’t comfortable when our own Brian Davis asked him about demanding the ball more after he scored 12 points and grabbed 15 rebounds against Oklahoma on 6-of-9 shooting. But he hasn’t shied away from being demonstrative when he gets those touches.

“There’s still more in him,” Smart said. “We’re going to fight like crazy to get that out of him. He’s never been the most communicative guy, but we need him, as one of our older guys, to express himself and demand the ball.”

Anyone who has followed the sport over the past few decades knows that players like Azubuike are considered dinosaurs nowadays as guards score more and distribute less.  Post players are basically throwbacks to another era when names like Patrick Ewing, Ralph Sampson, Hakeem Olajuwon and Shaquille O’Neal roamed these courts in abundance.

At 6-9, Sims could be considered a hybrid by comparison, but in stretches he displays dominance that belies his gentle demeanor.

“I looked forward to it because he’s good player,” Sims said of the matchup with Azubuike. “But it just comes down to five-on-five basketball.”

“How physical was he?” my buddy Kirk Bohls asked.

“You already know,” Sims deadpanned in perhaps the best interview line of his college career.

The final score didn’t reveal the full gut-wrenching nature of this loss because those who watched recognized that the Horns were the better team for several stretches before wilting in the final eight minutes.

Moving forward, they have to pull it together in quick fashion against a quality opponent. It’s time to put on their big-boy shorts to get a holiday win in Morgantown. The quick turn and the tired legs? Who cares? It’s part of life in the Big 12.

“That’s how it works in this league,” Smart said. “You play on Saturdays and Mondays sometimes. As a program, the good and bad things that occurred (against Kansas) … we can do better then put our best foot forward on Monday against West Virginia.”

So while the Horns are looking inward for the resolve it will take to pull this off, the team’s fortunes will improve drastically if the guards look inside.