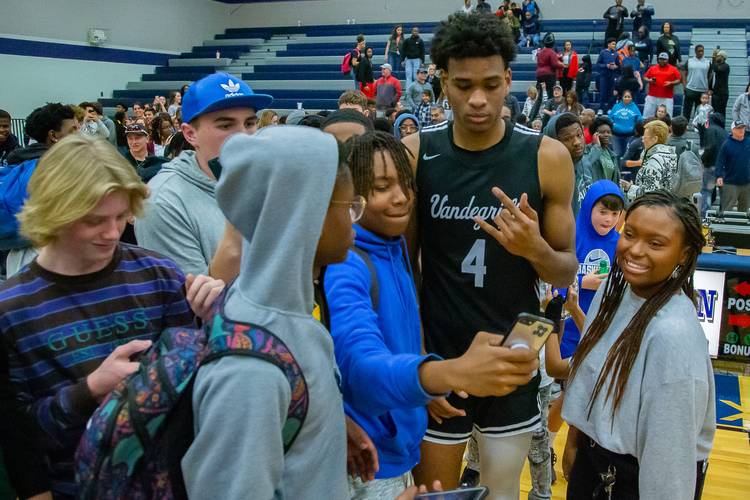 Vandegrift High School star Greg Brown III, shown with fans wanting photos and selfies after a recent win over Hendrickson, is a top-10 recruit in the country. Texas is on his short list. (John Gutierrez/For Statesman)

LEANDER — Cliff Ellis got his first glimpse of Greg Brown III on the court when Brown was a tall, spindly 13-year-old. He looked a little out of place, playing point guard of all positions for his Four Points Middle School team.

The personable Vandegrift head basketball coach, in his 20th year in the business, chuckles when he recalls those wobbly legs and distinctly remembers that Brown was a head taller than every other player.

“He was a baby giraffe,” Ellis said. “Just skin and bones.”

And how was he playing?

That hasn’t changed a bit. The stage has just gotten bigger as has he, the lights a lot brighter, the attention much more expanded.

Brown has matured from that skinny string bean of a kid to, well, a relatively bigger, powerful, explosive string bean. From first glance, he still seems to be all arms and legs, but he has sprouted into a 6-9 1/2-and-still-growing, 205-pound high school senior with a body that’s yet to fill out but screams potential.

And he no longer plays point guard, but he could. He’s a power forward or a small forward, maybe a shooting guard or really whatever you want him to be. He’s that versatile, that dynamic.

He’s a lot of things these days.

He’s the best player in the state of Texas. He’s the cornerstone of a 26-2 Vipers team that beat Vista Ridge on Tuesday and tied a school record with its 22nd consecutive victory. He’s an unstoppable force who averages more than 29 points a night. He blocks about four shots a game. He races down the court like a thoroughbred.

He’s seen every defense there is. When opponents crowd him, he blows by them for a dunk. When they sag off, he connects on an eye-popping 42% of his 3-point shots.

He’s the eighth-ranked recruit in the country, according to 247Sports. He’s coveted but still uncommitted. There’s a decent to good chance he becomes a Longhorn although he contends there is no favorite on his list of five possible destinations that also includes Kentucky, Memphis, Auburn and Michigan, maybe even in that order. He’s visited them all except for Michigan, though he’s scheduled to be in Ann Arbor next weekend. If I’m a Longhorns fan, I’d be worried about John Calipari’s chances.

Texas clearly stands high on Brown’s list. He loves the school’s academic reputation, loves the sprawling campus that he has  walked for years and where his dad played football. He adores Shaka Smart and took in the recent Kansas and LSU games at the Erwin Center — both losses in a maddeningly frustrating Longhorns season that does concern Brown.

But he so respects Smart that this week Brown told me, “I love coach Smart straight up. He cares about his players. If Coach Shaka is not there, I won’t go to UT.”

But as only an 18-year-old can, when asked his reaction if Texas does make a change but then hires a big-name successor, he said, “That’d be a different story.” Read what you will into that logic.

Yes, Brown clearly is a lot of things, all of which set him apart from most and explains why every coach from Roy Williams to Bill Self has shown up at Vandegrift’s morning practices to take a look at this jumping jack who really might be a Kevin Durant starter kit. He’s got a similar build, similar spring, this freakishly athletic kid with the 6-10 wingspan and the 3.40 GPA and almost 44-inch vertical leap and size 15 shoe.

And, as of last week, he’s a McDonald’s All-American.

He learned that from his father, Greg Brown Jr., a former two-time honorable mention All-Big 12 free safety for the Longhorns and now the unofficial president of his son’s fan club. He always sits in the top row of the bleachers under the Four Points sign and videotapes every game on his iPad, all the better to review his performance afterward. But he’s relentlessly positive and supportive.

Last week his dad picked Greg up after practice and casually told him a Sports Illustrated writer wanted to interview him because he was one of those elite super prep players, just the fourth McDonald’s All-American ever from the Austin metro area.

“You got in,” Brown Jr. said matter-of-factly in mid-conversation.

Greg paused, then said, “Repeat that.”

Greg smiled a smile of self-satisfaction, but says the news made him “happy sad.”

“Some of my friends didn’t get in,” Greg said. “They got snubbed.”

Did we mention this kid is as humble and as grounded as they come? When he threw away a pass on a fast-break at a practice, he quickly hit the floor for 10 punitive pushups. When he missed 15 games last season after ripping the bone out of his left ring finger and needed surgery to fix the compound fracture, he became the world’s best — and tallest — cheerleader, Ellis said. He could have sulked, but instead pulled for teammates like shooting guard Gabe Rayer, a 6-6 slasher who’s gotten offers from smaller schools like Texas Lutheran and Southwestern and has been invited as a preferred walk-on at Texas State.

Brown’s teammates call him “Hedgehog” for his spiky hairdo and razz him when young kids approach him for an autograph and they mimic him, mockingly asking for his signature as well. He hasn’t a smidgen of attitude despite the fact he’s had just 10 games in his high school career when he didn’t have a double-double.

“He’s just an absolute pleasure to coach,” Ellis said. “It’s so refreshing. He’s always dancing, always moving. He’s just a Bambi now, but he’s going to be a monster. Now he’s just a normal teenager who eventually will be in the NBA.”

That’s his plan, too. With a short, one-year stopover in college. For now he’s loving life. “I’m blessed so many people know me,” he said.

He’s not always showered with love from everyone.

Road crowds can be ruthless. He shrugs off the “over-rated” chants, dismisses the taunts when they chide him for a “five-star messup.”

“It’s just venom on the road,” Ellis said. “But the moment the game is over, they all come on the floor to get a picture with him. And he takes all the pictures.”

Brown knows he’s only got five regular-season games left — they’re at Round Rock on Friday night — before the playoffs. Ellis hopes the Vipers can go further than the regional quarterfinals, his deepest post-season push when sharpshooter and current Longhorns walk-on Drayton Whiteside took them that far.

After that, it’ll be decision time for Brown, who thinks he’ll grow another inch or so. He admits he was flattered when Kentucky’s rowdy fans chanted “We Want Greg” during a game he attended and says he was blessed to meet Memphis’ Penny Hardaway. He’s still kind of overwhelmed by all the attention.

He says he needs to see more of Texas, learn how they break down tape and work with individual players. The losses that have piled up, however, “weigh a lot” on Brown’s mind.

“Coach Smart says we can win it if I come there,” Brown said. “He says I have the potential to be the first pick in the draft.”

“Yes, sir,” he said. “I plan on being a dominant player in college, but I have bigger plans than college basketball.”

As such he might fit right in with Kentucky, which already has five top 10 players on the way to Lexington. But Texas has had its share of here-and-gone players like Jaxson Hayes and Mo Bamba, three in three years.

“Winning and making a difference is what I want,” Brown said.

For now, he’s doing both at Vandegrift as probably the best athlete to ever walk its halls. He can take over a game like the 39 points he had against Hendrickson and the school-record eight 3-pointers he drained in a tournament game versus Sherman. He’s just 143 points shy of scoring 3,000 points in his career, and that’s despite missing half of his junior season.

In the meantime, Smart will remain his shadow.

“Yeah, he’s kind of a staple here,” Ellis said of the UT coach. “If Kansas comes, there’s Texas standing right next to ‘em. Same for Kentucky. Texas is always right there.”

Sometime in the next seven months, it’ll be Brown who will be standing next to one of those coaches. At least for one glorious year.