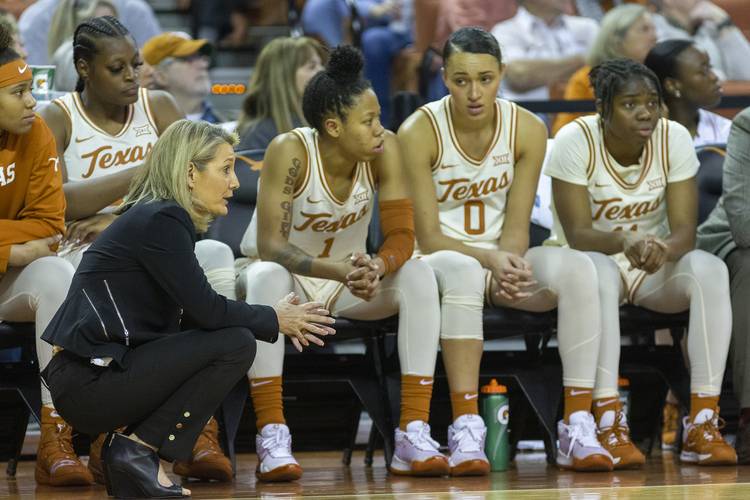 Texas head coach Karen Aston speaks with her team on the bench as they compete against Baylor in Austin on Jan., 31, 2020. [Stephen Spillman for Statesman]

So much for the heralded Battle of I-35.

The skirmish between freeway neighbors Texas and Baylor didn’t materialize Friday night and instead devolved into the Eyesore of I-35, at least for the humbled home team.

The second-ranked Lady Bears created a nightmarish experience for the outmatched Longhorns and used a killer third quarter to run away for a ho-hum 64-44 victory.

Forget the lopsided margin. It was much worse and unfortunately continued a disturbing trend for Karen Aston’s slipping program, which fell to Baylor for the 21st time in the last 22 meetings and remains on a trend of national irrelevance, relatively speaking. The Lady Bears’ dominance began before Aston’s arrival, but there appears no stoppage in the direction of this pattern any time soon.

There’s no shame in losing to Kim Mulkey’s team, the defending national champion, which sits at 19-1 with the lone blemish coming to South Carolina without her best player, Lauren Cox. But there is in not showing a pulse, especially at home, playing badly and losing practically every single time to them.

Yes, the Baylor women own Texas.

Lock, stock and barrel over the Longhorns as if they’re not even there.

And Baylor wasn’t even at full strength. Sophomore forward Nalyssa Smith, trying to come back from a high ankle sprain, got on the floor for 11 mostly ineffective minutes.

“We’re grinding out wins until Nalyssa gets backs,” Mulkey said. “We’ve got enough talent. We’ve got enough experience to keep doing it until we get everybody on the floor healthy. We can have a special team later in the year.”

Texas is waiting to be special again.

Pure and simple, the Lady Bears trounced the Longhorns, but the home team contributed mightily to its own undoing.

Texas shot poorly — from the field, behind the arc, at the free-throw line and, we presume, in pregame warmups. Its players refused to share the ball, holding onto it as if it were the Hope Diamond, which explains the pathetic number of three assists. (Baylor had 16.)  At the line, Texas clanked 12 of 19 free-throw tries. Inexcusable.

The Lady Bears completely throttled Aston’s frontcourt, the strength of her team, holding 6-foot-3 Joyner Holmes and 6-5 Charli Collier to seven points on a combined misfiring of 3-for-24. Collier’s lone basket came on a 3-pointer in the first five minutes of the game.

“Collier got a lot of rebounds (16), but the only bucket she got was a 3,” Mulkey said. “I’ll take a 6-5 player shooting a 3 outside rather than posting up all night.”

A little slight to Aston there in this blood feud of a one-sided rivalry. Texas fans should expect better out of a team with five McDonald’s All-Americans, four of them top 10 national players.

The lousy performance baffled Aston and frustrated most in the crowd of 6,456.

“This one puzzles me,” she said. “I don’t know why we went off on our own. You’ve got to prepare ’em to the best of your ability. I got to figure out where we went wrong. I was a little fooled by this. I thought they were prepared.”

The dilemma of the direction of Aston’s program falls in the lap of athletic director Chris Del Conte, who has to weigh the merits his coach brings as the second-best franchise in the Big 12. Trouble is, it’s a distant second to the team in Waco and isn’t even ranked.

“There was a period of time today when we were all frustrated about how we were not getting good offense, how we didn’t share the ball as much as we should,” senior guard Lashann Higgs said. “We obviously don’t like the outcome of this game.”

Texas has been playing well of late, having won five straight. But Baylor’s a different type of opponent, and UT didn’t measure up.

The Longhorns are 14-7 but have shown signs of tremendous play, knocking off No. 1 Stanford and No. 17 Tennessee on the road. So the talent is there. Aston just has to do a better job of coaxing it out of them.

Aston’s lame-duck status shows Del Conte doesn’t have complete trust in her or he would have extended her contract long before now, given the way this school hands out coaching extensions like Halloween candy. Her contract will expire in August, and it’s up to her to show meaningful progress and grow a much more competitive edge than her club showed Friday.

If Aston’s team doesn’t show more life in big games and play well down the stretch, Del Conte might have to decide which of his basketball coaches he should fire first. They don’t come any more liked or better people than Aston and men’s coach Shaka Smart, but the recent results don’t strongly support either.

The Texas women haven’t won a Final Four since 1986 and haven’t been to one since 2003. The program has become a solid one that toggles between the Sweet 16 (three times) and first-round wins (once). Aston took her 2016 team to an Elite Eight and got a two-year extension but has stumbled early in the postseason ever since. Her team lost its NCAA Tournament opener last year.

“I like playing ’em,” Aston said. “They’re always going to be good. Your discipline will be tested. If you can compete against them, you have a chance to do something in the NCAA Tournament and make a run in that tournament. We played Stanford at that level for four quarters. Am I chasing Baylor? Yeah. We all are.”

And it’s time to catch up to Baylor every now and then.

Bohls: Tom Herman is bringing in talent by the truckload, but will it lead to a Big 12 title?