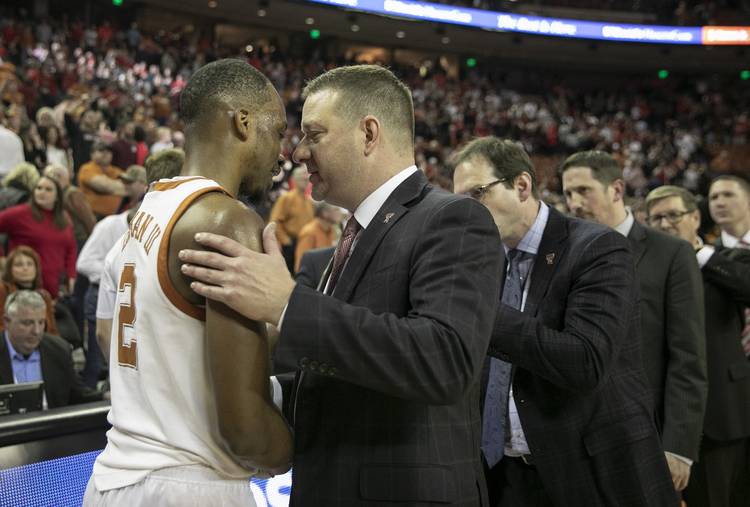 LUBBOCK — Yeah, I know. The game was in Austin, but it sure didn’t feel like it. Or sound like it, considering Texas Tech fans probably made up about a third or at least a quarter of the best crowd of the year at the rowdy Erwin Center on Saturday.

But to avoid all claims of fake news for the sake of journalistic accuracy, we’ll start over, kind of the way Shaka Smart wishes he could do this troubling basketball season, with the proper dateline.

AUSTIN — Texas lost a close one.

Where have you heard that one before?

Yes, it blew a chance to topple the defending NCAA Tournament finalist Red Raiders — and perhaps its fleeting postseason hopes and Smart’s Austin residency — when it lost at the end.

Just as it did against LSU. And at Kansas. And all the ones in Smart’s previous four years. And then there were the times the Longhorns came up short in games that were not all that close.

At this rate, Chris Del Conte might not have to fire Smart. Shaka might fire himself, even though there are 10.5 million green reasons not to.

The evidence to make a coaching change keeps mounting. Just tack this one on, two days before No. 1-ranked Baylor comes to town Monday night.

If Smart entertains any hopes of sticking around, he’d better pull the monumental upset then. He needs that more than the hustling, emotional effort his team gave. He needs a good finish.

OK, a heroic half, which is its nature.

Then the inspired Red Raiders came out, took it to Texas, threw up some tents and campfires in the paint, shot 20 free throws after just one in the opening half and watched the Longhorns wilt as TJ Holyfield blocked III consecutive Matt Coleman III shots in a row.

Shaka’s gut has to be very sore by now.

When I asked Texas Tech coach Chris Beard if that déjà vu ending felt a little bit like “Groundhog Day,” he looked confused and asked, “Is that the Bill Murray movie? I don’t watch a lot of movies.”

It made it all the worse that Smart’s defeat came at the hands of Beard, the Texas Tech whiz, or the “king of Lubbock,” as one prominent Tech official called him. Beard, of course, is the coach whom all of Longhorn Nation covets for the way he has personally built his basketball program into the equal of the Kentuckys and Kansases and came within an overtime of beating Virginia for the school’s first basketball national championship.

Beard, a Texas grad and a former student manager under Tom Penders here, fits Texas to a T, but he’s got a better job in Lubbock and might be waiting on a North Carolina or Kansas to open up. The country boy is that good. He’s John Wooden with a Whataburger palate.

In his postgame presser, he even expressed his preference to haul some Salt Lick barbecue and a Players cheeseburger “and maybe a Coors Light” on the trip home. OK, we’ll excuse him for not knowing the iconic campus joint Players closed years ago, breaking all our hearts, but maybe Chris needs to return for an Austin refresher course.

Chances are, there will be a coaching vacancy in Austin because Smart can’t win games like Saturday’s, one of the most winnable, big games in Smart’s tenure here. Tech is much better than Texas and tougher on both ends of the floor, but the Longhorns had ’em where they wanted ’em. Until they didn’t.

While Tech scorer Jahmi’us Ramsey said Beard “preached to us the whole time at halftime, ‘Get to the paint; get to the paint,’ ” the Red Raiders took the message to heart. They owned the paint.

Both coaches preach aggressiveness and toughness and tenacity, but only one of them consistently gets it.

Smart doesn’t have bad players. Andrew Jones was on fire the first half. Kam Hepa and Royce Hamm may be treated for terminal floor burns. Coleman was damn near unstoppable until that late stretch. Beard said, in Tech’s terminology, he’s a MIG. Texas’ Most Important Guy. And he was since Most Tall Guy Jericho Sims turned docile, didn’t have a field-goal attempt until the second half and fouled out with three-plus minutes to play. He finished with two points and was 0-for-2 from the field. Cripes.

Tech’s MIG, Davide Moretti, who is Beard’s de facto point guard because he doesn’t have a true one, scored just seven points but hit four critical free throws in the final 15.3 seconds to ice the game.

Beard praised Smart, as he always does. “The way I feel about Shaka is well-documented.”

So is the way much of Austin feels. Smart’s a terrific guy, but it’s about wins and losses. It ain’t personal.

Asked his thoughts about Texas, Beard said, “I think they’re right there with everybody. The difference between second and ninth place is a couple of close games.”

And we know who loses those.

Texas just cannot get over the hump. It plays well enough in most cases to actually see the hump, but it can’t traverse that mountain, which explains why at 14-9 overall and a distressing 4-6 in Big 12 play, the chances of an NCAA Tournament berth seem to be ebbing away.

Eight games remain in this irregular season. Only three of those are against conference teams below them in the league standings, and two of those are on the road against Iowa State and Kansas State.

Common sense says Texas has to finish at least 9-9 to have any realistic shot at an NCAA invite, so the Longhorns must win five more. Doable but doubtful, considering its pattern of blowing leads like the 16-point first-half advantage it did Saturday. Shaka’s message?

“Just win,” he said. “Our guys are very aware of where we stand and what we do. You get a lot of really good opportunities, but that also means it’s a really good team you’re playing, and you got to play at a high level for 40 minutes.”

Forty, not 20. The evidence is mounting.

Bohls: Tom Herman is bringing in talent by the truckload, but will it lead to a Big 12 title?