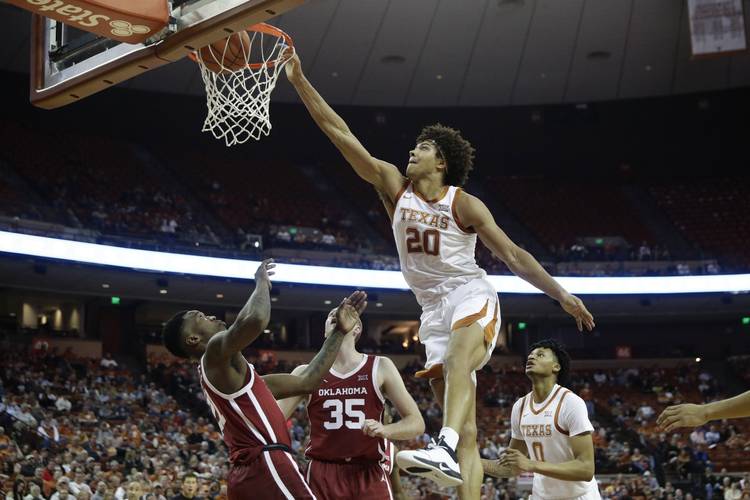 Jericho Sims has gone up against Kansas giant Udoka Azubuike and some other really good posts, but his biggest opponent is the guy staring back at him when he brushes his teeth each morning.

The Texas junior sometimes can’t get out of his own head, and while this season has been one of the breakout variety for the mild-mannered  6-9 skywalker, he picked a horrible time to play his worst game of the year.

Saturday’s no-show against Texas Tech — two points on 0-for-2 shooting with four rebounds, two turnovers and five fouls in an uninspired 19 minutes of the 62-57 loss — wasn’t the only reason Texas dropped to 4-6 in Big 12 play. That said, some regular Sims output would have gone a long way.

With top-ranked Baylor — the owners of a 21-1 record —  in Club Erwin for Big Monday, the banged-up Horns are going to need him to put that showing in the past and get back to dunking, rebounding and blocking shots or else this season will go from slipping away to free-fall, a fate embattled coach Shaka Smart would not likely survive.

“There’s no faith lost,” said guard Matt Coleman. “We can compete with any team. We just have to finish and  execute better down the stretch on the offensive end and the defensive end.”

Same goes for their best post player. Sims came in here from Minnesota as a gentle giant with a humongous upside albeit lacking game experience against great competition. He showed flashes of sustained brilliance in the second half of his sophomore season and then really came to life at the start of conference play of the current campaign when he posted his second of three consecutive double-doubles — 13 points and 15 rebounds — a bright light in what was otherwise a forgettable 59-44 loss at Baylor.

Sims has the ability to move the Erwin Center crowd and inspire his teammates because he’s just that, a crowd pleaser. He has thrown down some of the most vicious dunks the program has ever seen, but remains an enigma at times — a manchild who often has to be reassured by teammates and coaches that yes, he can be great.

That was the case Saturday against a Tech defense that was designed to take him away with double teams. That strategy and early foul trouble got to him mentally. On more than on occasion, he had an opportunity to post up a smaller defender and made no attempt to do so. At one point, team leader Coleman implored him to establish position  on the block but, he seemed uninterested.

“It’s something that overall he’s gotten better during his time here, but he still not nearly assertive as we would want him to be at time,” Smart said, saying what everyone else knew.

He has to figure out how to play with a high motor — even when he’s in foul trouble — and show some grown-man want-to when he has a smaller defender on his hip. Texas just isn’t good enough to beat anybody when their best big plays like Rip Van Winkle before that first cup of coffee.

Thus presents the huge challenge facing Smart and his staff in this crucial stretch of the season. Sims, when properly motivated, presents an opportunity to make Texas more versatile. When he’s engaged, the Horns are a tough out. When he’s isn’t, an average team becomes much too predictable — you know, like the one that unsuccessfully ran what was basically the same play three straight times in the closing seconds against Tech.

Motivation can’t just come from coaches and teammates, but from the man himself.  If you watch someone like Royce Hamm, you see a guy who is desperate to help his team win, whether it’s by diving on the floor for loose balls or coming out of nowhere for a blocked shot. Sims is the more talented of the two, but Hamm plays with a perpetual intensity while Sims can fade into his old malaise on occasion when things don’t go well.

He needs to put Tech behind him and rediscover that dominance he showed in the first Baylor meeting, else Texas will be run out of its own gym on national television by a Final Four contender.

Bears are scavengers by nature, so expect Baylor to come in here eager to finish off what Tech left behind. Sims will have his hands full inside against Freddie Gillespie and Mark Vital, but he banged well with them in the first meeting.

He remains an elite talent, but having others believe in him isn’t enough.

It all starts with the man in the mirror.

Bohls: Texas smarting from another loss, this one to the coveted Beard