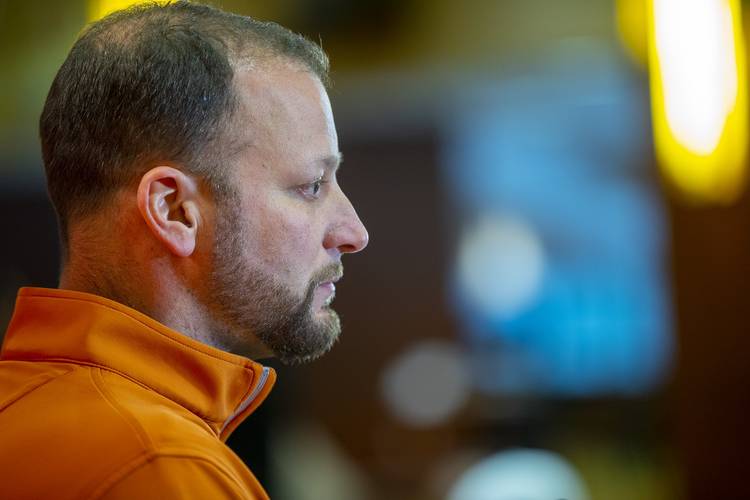 Mike Yurcich has been around the block a time or two.

This after not always being in the neighborhood of major college football. Not to be harsh, but most wouldn’t call his previous stops at Shippensburg University or Edinboro or Saint Francis the epicenter of the sport.

But Texas’ new offensive coordinator cut his teeth at the smaller divisions and has gone from relative obscurity to high-profile visibility almost in the blink of an eye after toiling for 14 years at three different schools following a career as a three-year starting quarterback for California University of Pennsylvania.

No wonder Yurcich sounds so grateful to continue to be a top coach at the highest level since 2013.

He’s been an offensive coordinator at two big-time Power Five programs for the last seven seasons and contributed in prolific manner to both units that have been among the best in the nation.

In short, he’s crushed it. And that makes him an incredibly strong hire by Tom Herman, who reshaped almost his entire coaching staff this offseason.

“I’m glad to be part of this unbelievable tradition,” Yurcich said at Tuesday’s press conference where the seven new assistants were introduced. “I’m honored to be here.”

Know that he’s a deeply passionate coach, one who was described by those who know him as both “very guarded” but also a “world-class” developer of quarterbacks.

He’s a 44-year-old Ohioan whose wife, Julie, was an All-America cross-country runner. He runs “only when chased by snakes or wolves.” He should fit in well here because he loves his music, especially on game days when he alternates between Phil Collins and Metallica. He’s very intelligent, smart enough to earn a psychology degree from college as well as a school counseling license.

And he’s quickly gotten up to speed as he’s already watched every UT offensive snap of last season and is breaking down tape and poring over little details like snap counts and specific running plays.

He had to have been to get where he is. Yurcich comes to Austin after a one-year stint at Ohio State where he was the quarterbacks coach but didn’t call the plays, and before that six seasons at Oklahoma State.

Not bad for a guy who OSU’s Mike Gundy plucked out of a Division II program at Shippensburg in south central Pennsylvania where he was making $52,000 a year. While there, Yurcich helped head coach Mark Maciejewski create an 11-2 team that earned the Red Raiders their first playoff win in 20 years and led the nation with 530 yards of offense a game.

Gundy found Yurcich on the Internet and had trouble tracking him down, but he was hot on the trail of this budding star after growing weary of having his play-callers using OSU as a steppingstone to better gigs. So after losing Todd Monken and Larry Fedora to head coaching jobs at Southern Miss, one after the other, and Dana Holgorsen to the top job at West Virginia, Gundy was out to find a talented hire who might stay for more than a pinch of Red Bull.

Through a lot of trial and error, he finally found him at Shippensburg, fell in love with Yurcich’s offensive mind and offered him a three-year deal in Stillwater for the incredible sum of $400,000 a year.

Talk about an instant upgrade.

Herman hopes for the same after hiring him for a reported $1.7 million to run the Texas offense and improve a unit that toggled between brilliant against LSU and Utah at either ends of the season and borderline pathetic against Baylor and Iowa State. Despite talent that included a 3,000-yard passer, a 1,200-yard receiver and a pair of running backs who both topped 600 yards rushing and showed great promise, the Longhorns frustrated their fans and eventually cost Tim Beck his job.

Yurcich already has an advantage over Beck in that the latter had his play-calling duties taken away by Herman for the bulk of the last two seasons. Yurcich admitted he left Ohio State to do that and said calling plays “gets me off.” Hopefully, an aroused Longhorn Nation can say the same next fall.

For a man who worked at the lower rungs of college football, Yurcich’s rise through the ranks at Oklahoma State and for one season at College Football Playoff semifinalist Ohio State has been tremendously successful. Gundy loves the guy, but for reasons known only to the Mullet Man, he declined to be interviewed about his former assistant as is the Cowboys head coach’s custom.

On the surface, this might even look like a lateral move for Yurcich, except for the fact that he didn’t get to call plays in Columbus. On Tuesday, he talked about his career journey to Texas like a holy pilgrimage and conceded the allure of coaching a quarterback with the skill set and football IQ of Sam Ehlinger enticed him.

“Sam’s a hell of a player,” Yurcich said. “He’s a big part of why I chose this position. He’s a proven winner. There’s a lot of football IQ going on there. He can get you out of bad plays. He’s the total package.”

Hopefully, the same can be said for Yurcich. Part of his roots in Stillwater should serve him well.

“Having coached in the Big 12, it gives you perspective on the enormity of what Texas football is,” he said. “The football played here at the high school level is unmatched. To coach quarterbacks and call plays is an opportunity that comes once in a lifetime, and I’m not going to pass that up.”

His familiarity with the Big 12 should keep him in good stead. He understands that some Saturdays might take 50 points to win, and even that might not be enough. He knows it’s a league where Oklahoma can have back-to-back Heisman winners and first picks of the NFL draft and where Patrick Mahomes never won a bowl game or a conference title at Texas Tech but seems to have done all right for himself at the next level.

Yurcich remains a humble sort who counts his blessings. He made note of his wife unpacking boxes back home. He speaks easily and compared coaching football to dealing with boulders and pebbles.

“You want to move the boulders and not mess with the pebbles,” he said, assuming he means not to sweat the same stuff from outside. “Coach Gundy seemed to move the boulders. His ability to prioritize is uncanny, and he treats his players and coaches very well.”

Yurcich wasn’t always hailed as a genius in Stillwater, particularly when the team was beset by quarterback injuries — he once had five play over two seasons — and lagging offensive line play. But that spoke more to a dubious fan base he had yet to convince.

Ultimately he stayed the course, won over the fans and, along with Gundy, consistently produced top-10 offenses that kept Oklahoma State among the top programs and made himself a finalist for the Broyles Award in 2016 as one of the nation’s top assistants.

While there, he raised the level of such quarterbacks as outstanding dual-threat J.W. Walsh and 2019 Pittsburgh Steelers starter Mason Rudolph as well as current XFL backup Taylor Cornelius, whom Yurcich molded from a fifth-year senior walk-on into a highly productive quarterback who ranked sixth nationally in passing with 32 touchdowns.

“His quarterback development speaks for itself,” Herman said, noting Ohio State’s Justin Fields was a finalist for the Heisman Trophy last December.

His offenses are known for being big on up-tempo, and he very much wants to incorporate a strong dose of running into what will remain a power spread attack that relies on downhill running as well as a passing game that stretches the field. He rarely had the benefit of a strong offensive line at Oklahoma State — one year the Cowboys allowed 40 sacks — and didn’t have great runners until Justice Hill and Chuba Hubbard came along.

“Tempo is a big thing with him,” Herman said. “It’s a little more advanced. But you definitely want a fresh set of eyes and a better way of doing things.”

That said, Herman’s reluctant to suggest this will be Yurcich’s or Herman’s offense even though Yurcich will accommodate the players and try to adapt to the Texas terminology.

Asked if Yurcich will have free rein to put his stamp on the offense, Herman said, “That’s a bit of a misnomer to fans or reporters. When you hire a new coordinator on either side of the ball, they don’t just come in and drop a binder on the desk and say this is my offense.”

Yurcich said the Longhorns offense is very similar to the Buckeyes, which isn’t all that surprising since Herman once filled his role in Columbus under Urban Meyer. And that sounds appealing.

And the well-traveled Yurcich knows all about adapting.