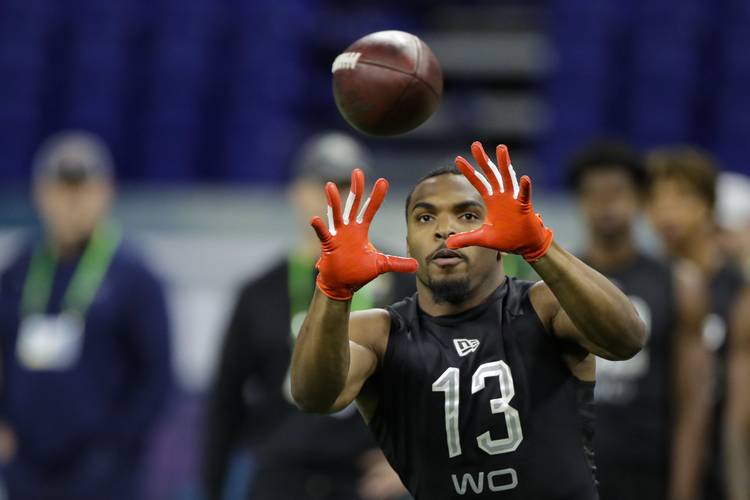 Collin Johnson has to prove himself all over again.

Meanwhile, his fellow Texas receiver Devin Duvernay is climbing the draft charts after an impressive showing this week at the NFL scouting combine in Indianapolis.

Duvernay and Johnson both will be drafted in April, but the question is on what day?

Johnson arrived in Indianapolis this week oh so eager to show doubters that he could run under 4.6 in the 40-yard dash and, more importantly, remind them just how great he was in college when he was on the field.

His ability was never questioned in college, but his durability was. After missing just one game in his first three seasons, he missed six in 2019, all hamstring issues. His 38 catches for 559 yards and three touchdowns were a mere fraction of his full capability, but since the NFL is built on the what-have-you-done-for-me-lately principle, Johnson is battling the perception that he can’t stay healthy.

Scouting profiles point to his size and ability to high-point the ball as strengths but also mention his struggles to get separation from defenders and his need to improve route running and fluidity in changing directions.

It doesn’t help that he tweaked a hip flexor before the combine drills began, forcing him to not run in Indy but instead run the 40 at Texas’ pro day for scouts on April 1.

He did throw up 225 pounds 17 times on the bench press, which is a very nice output from a wideout. Showing strength is all well and good, but wideouts are going to be judged ultimately on how fast they run and catch.

“I think the injuries probably affected my stock a lot per se, but at the end of the day, I can tell you I’m better because of it,” Johnson told the Fort Worth Star-Telegram. “I’m a better man and a better football player. It taught me to appreciate the times you are out on the field because it can be taken away from you at any given moment. I’m very appreciate of every opportunity to prove myself.”

While Johnson still has some proving to do in the speed department, the 5-10, 200-pound Duvernay did nothing to hurt his cause. He posted a 4.39 in the 40 and looked great in the receiving drills. He also went 35.5 inches in the vertical jump and 123 inches in the broad jump.

Scouts love his Velcro hands and game-breaking speed in space, but say he needs to work on expanding his route tree and improve as a blocker. I could see him being a real steal in the fourth or fifth round because his tape doesn’t lie. He didn’t miss a start in 2019 and caught at least six passes in every regular-season game.

Duvernay’s 106 catches for 1,386 yards and nine touchdowns were reminiscent of the senior season turned in by Texas legend Jordan Shipley, a similarly-sized sprinter who caught 114 passes for 1,485 yards and 13 touchdowns for the 2009 national runners-up.

Collin Johnson has to prove himself all over again.

Overall, the sheer talent numbers do not play in the favor of the Horns because they are part of a deep receiving class that rivals the 2014 group that produced Pro Bowlers Mike Evans, Odell Beckham, Davante Adams, Allen Robinson and Jarvis Landry.

The draft site WalterFootball.com has seven wideouts going in the first round. Oklahoma’s CeeDee Lamb, Clemson’s Tee Higgins and Alabama teammates Jerry Jeudy and Henry Ruggs III — the latter clocked a combine-best 4.27 in the 40 — are all getting early consideration along with UT tormentor Justin Jefferson, a LSU ex who surged up the draft boards after running a faster-than-expected 4.43.

CBS Sports has Duvernay, who has met with the Giants, 49ers, Texans and Patriots, listed at 79th among wideouts with Johnson coming at 127th, a sure sign that his injury woes are affecting his draft stock.

“That hurts,” Johnson said. “You grow up watching the combine and your whole life it’s, ‘I can’t wait to prove myself.’ That is going to be on hold for me. I am going to be ready April 1.”

While Duvernay surges, Johnson awaits an opportunity to tell the pro football world something Longhorn Nation has known for quite some time: He’s more than capable of getting it done in that league.

Golden: Amid an Augie backdrop, Texas regains its footing against Fullerton