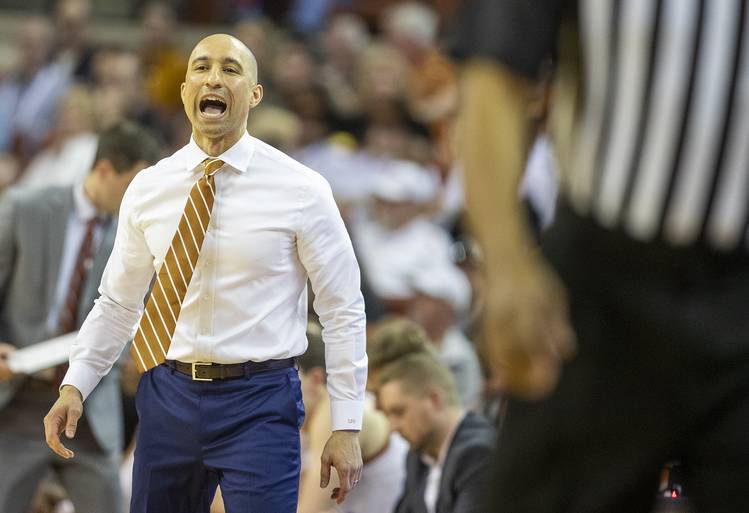 I would imagine so has Chris Del Conte. And Gregory L. Fenves.

And I’m sure Longhorn Nation has.

But Shaka Smart’s had enough time, and now it’s time to pull the plug UNLESS — a big unless — he can slide into the NCAA Tournament. That’s the minimum he should achieve.

Otherwise, cut him a big, fat paycheck and cut him loose.

Oklahoma State’s 81-59 blowout upset of the Longhorns before the biggest crowd of the year at the Erwin Center punctured Texas’ hopes of nailing down a NCAA bid as the Big 12’s third-place team even before the conference tournament begins. Now it must wait to be invited, which is not where anyone expected Texas to be sitting in Year Five of Smart.

Sure, Smart hasn’t been lucky with two full-time starters out for half the season and two more on the injured list, but can you really blame bad luck for five bad years? Where are the pure shooters every other team seems to have?

Shaka had just eight scholarship players available for this game, but Oklahoma State’s Mike Boynton played only eight men until the final 56 seconds and shot a whopping 66%. Where was the defense?

Recent five-game win streak aside, when Texas really had to put its best foot forward, it had one of its worst performances of the season and now has three dreadful losses by 22, 29 and 38 points.

Barring a dramatic turnaround in next week’s Big 12 tournament when Texas will face more must-win games like Saturday’s in hopes of getting a NCAA berth, the school’s athletic director and president have a tough decision. One that could cost the school up to $22 million, depending on other candidates’ buyouts. That’s serious coin.

Del Conte attends almost every home press conference, as he did Saturday, but declined to talk on the record.

It’s complicated because the sense is he and Fenves wildly support Smart and would love to retain him. However, Longhorn Nation doesn’t have the same patience and has every right to already consider a coaching change a fait accompli.

In an interview with “On Second Thought” podcast two weeks ago, Del Conte said, “I truly adore Shaka Smart as a person.” Everybody does.

“We know the expectations,” Del Conte said on the podcast. “I get it. You can’t put your head in the sand. The Longhorn Nation is at unrest.”

Texas (19-12, 9-9 Big 12) didn’t accomplish anything Saturday, getting punked from start to bitter finish by a streaking but still eighth-place Oklahoma State that muddied the Longhorns’ chances of landing an at-large berth to the NCAA Tournament and Smart’s future.

With everything on the line, with Joe Lunardi penciling Texas in as a 10th seed with a win, with 12,733 fans there that Smart has been begging to show up at the Erwin Center waiting to be impressed, the Longhorns wilted.

“I felt like we were the opposite of who we’ve been the last five games,” Smart said. “It started with the beginning of the game. We were never able to get back into striking distance.”

Texas could decide to retain Smart because he’s ethical and likable, but he’s also accountable. His Big 12 record is a dismal 40-50. Overall, he’s a mere 12 games over .500.

You can’t really put too much stock into a modest two-week run at the end of a fifth season, as impressive and fun, though, as it’s been. Maybe the team was too exhausted, too emotionally spent from all it had to put into the streak. The Longhorns played uptight throughout and shot horribly.

After a painful five seasons largely of mediocrity interrupted by occasional flashes of progress and a few high-water marks like a NIT championship and three lottery picks and this five-game win streak, it seems more mirage than momentum.

Besides, Del Conte has called Texas a modern-day sports Goliath and said he expects every program to be top-10 caliber, given the school’s deep resources and commitment to winning.

Sure, it’ll cost up front the staggering sum of $10.5 million to buy out the final three years of Smart’s contract. But as one top Longhorn official said, “CDC has it in his back pocket.”

If Texas is serious about correcting a decade-long slide since the Rick Barnes glory years, he may have to look in every one of his pockets.

Smart can stay if Del Conte and Fenves don’t have the stomach to fire him and are satisfied with the status quo. While Texas’ non-revenue sports like softball, volleyball, men’s and women’s swimming, golf, tennis and track are killing it, men’s and women’s basketball are trending downward.

“I would agree that public perception is we’re taking on water,” Del Conte said on the podcast. “We’re trending in a way where our expectations would not want us.”

In fairness, that was said before the five-game win streak.

But does even that small sample size represent enough progress?

How much is enough?

Golden: Amid an Augie backdrop, Texas regains its footing against Fullerton