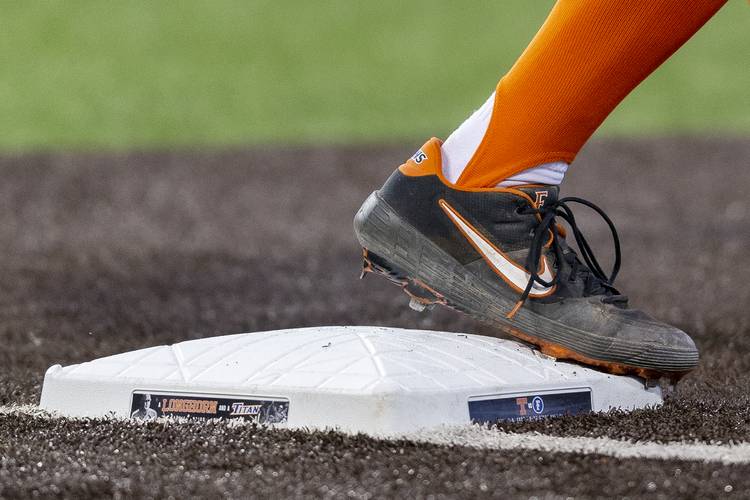 When David Pierce replaced Augie Garrido back in the summer of 2016, one of the first calls the new Texas baseball coach received came from Cal State Fullerton’s Rick Vanderhook.

Vanderhook, who played and coached under Garrido at Fullerton, had an idea up his sleeve.

“The first thing I asked was, ‘When are we going to play?” Vanderhook said Saturday. “David and I have been friends for a long time and I thought it would be great to get our teams together.”

Somewhere, their longtime mentor is smiling.

They’re calling this the Augie Series, matching Fullerton — the program that Garrido took from practicing at local high schools and public parks to the top of the college baseball world — against Texas, the national power that Garrido returned to championship glory after it spent two decades outside the winner’s circle.

The Longhorns have gotten the better of it so far. After losing three of their last four entering the weekend, the Horns clinched the series win on Saturday with a 4-3 decision at UFCU Disch-Falk Field with the late Garrido’s figurative fingerprints showing up all over.

The Horns (12-3) played that scrappy small-ball mentality to the hilt with six infield singles, including a pair of bunts from left fielder Eric Kennedy. It had to warm the hearts of fans that remember the coach who once said he’d bunt Babe Ruth if the leadoff man reached base.

Meanwhile, four Texas pitchers limited the Titans to eight hits, including freshman lefty Pete Hansen, who got the win with 3.2 innings of scoreless relief.

When asked about Garrido’s influence following the game, Hansen cracked a wide smile.

“Everyone knows the famous video,” he said, referring to Garrido’s profanity-laden post-game locker room speech that was immortalized on YouTube and in filmmaker Richard Linklater’s “Inning by Inning” documentary. “We watched it coming into the week. It’s definitely fired up us a bit. Augie is a legendary coach and we take knowledge from him. (Texas assistant) Huston Street played under him and tells stories all the time. This game is to honor him. “

So, would you want Pierce to one day yell at you that way, Pete?

“They won,” Hansen said. “They got it done. If it means we win, I’m all for it. He was a competitive dude and that’s something we like.”

He was also the only coach to win multiple College World Series title with two different schools. Garrido famously brought his Fullerton team to Disch-Falk Field for a three-game series in 1983 to face fellow coaching legend Cliff Gustafson’s Longhorns because Garrido wanted to show his players how a big-time program operated.

“Augie was getting us ready,” Vanderhook said. “This place was one of the best environments in college baseball and he wanted to show us what to expect once we got in a regional.”

One year later, the Titans halted Texas’ attempt at a repeat with a 3-1 win in the College World Series finale.

The present day teams are having opposite experiences to start this season — Texas is 12-3 and off to its best start since Garrido’s last College World Series team in 2014, while Fullerton is struggling at 4-11 — but the meaning of this pairing goes far beyond who won and who lost.

“Matching the two together is always special,” Pierce said, “But then you throw the Augie piece in there and what he meant to both universities and both regions and how special he was.”

When I was first assigned to the Texas baseball beat for the 2003 season, Garrido was at the peak of his powers, having already won a national title the previous season to go with the three he had in his back pocket when he arrived from Fullerton in 1997.

“What do you know about my philosophy of baseball, Cedric?” he asked as we watched a practice over near the third-base line next to what was then the home team’s dugout.

“You’ve always used the sport as a teaching tool for life lessons,” I replied. “It’s bigger than just playing the game.“

“You know what, Cedric? We’re going to get along just fine,” he said.

Garrido wasn’t a perfect man — his story, on and off the field, is well documented — but he was damn close to being the perfect coach. At his best, he would usually get the optimum level from his teams when the stakes were the highest, and at his worst he was still must-see TV and great copy for guys like me who were fortunate enough to cover him.

As for this weekend, it was a wonderful way to honor a college baseball Titan who brought championships back to the Longhorns while giving us all a lifetime of memories.

Bohls: Streak, maybe the season, is over; when is enough enough for Texas, Shaka?