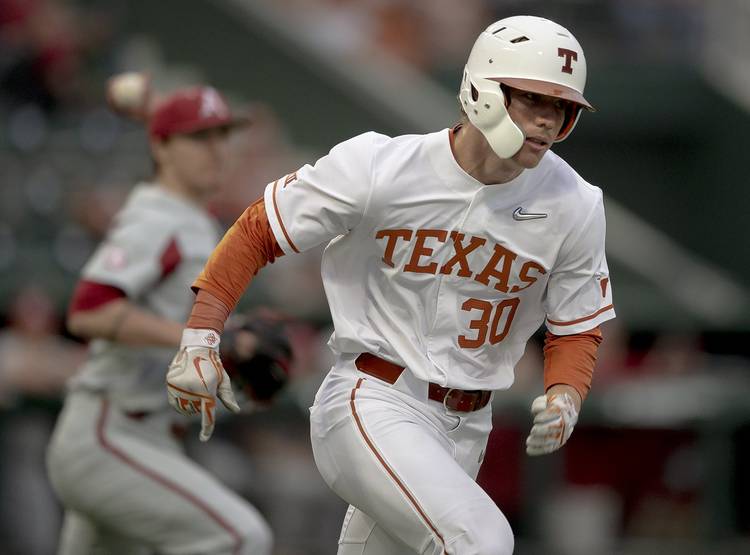 David Pierce knows it’s been a good weekend of baseball when his biggest concern coming out it involves finding a No. 3 starter.

And the Texas head coach does need to.

But he’ll take that kind of problem over a lot of others in early March after his unranked Longhorns rebounded from a deflating series at Minute Maid Park with losses to LSU and Missouri and a midweek defeat by Arizona — and did so in a big way to improve to 13-3 on the year.

On a gorgeous Sunday, they completed a three-game sweep of scuffling but proud Cal State Fullerton by using Dawson Merryman’s masterful relief pitching in a combined four-hitter and a 12-hit attack paced by Austin Todd and Eric Kennedy to take an 8-4 win at UFCU Disch-Falk Field.

“We’re a young team, and it very easily could spiral,” Pierce said. “But it didn’t affect us at all.”

But the pitching rotation could still use a little work before it hands the ball over to Merryman and friends, even with the 1.67 team ERA Texas just compiled in the sweep.

With sophomore right-hander Coy Cobb scuffling for the second straight start and getting pulled after just 1 1/3 innings, Pierce might well have to insert reliable left-hander Pete Hansen into that role.

Merryman is more than comfortable with his own role, even though he was a closer with four saves in summer ball in the Cape Cod League and a starter at Midland College before Texas.

So does Pierce, who extended the sophomore right-hander with four strong shutout innings after Cobb melted down and Tristan Stevens gave way to hamstring tightness after just three batters.

“Dawson was the story of the day,” Pierce said. “He only had two strikeouts in four innings, but he commanded the ball, threw his fastball to both sides, his change-up to lefties and his slider well enough to right-handers. When you’ve got an angle (from his arm slot) and you can command it, you’re going to have success, and he did.”

Merryman became a sidearmer after his senior year of high school “to be a little different” even though he was successful conventionally. He was the Western Junior College Athletic Conference MVP with 97 strikeouts in 80 innings and made 14 starts, six of them complete games. He noted they were all seven-inning games except for one.

So could he go nine now?

“Oooh, I don’t know,” he said after clenching his teeth and grimacing.

Fortunately, he won’t have to.

Pierce had high hopes Cobb could fill that critical No. 3 spot in the rotation for Texas to make a serious charge at a Big 12 title. He’s tried to build up Cobb’s morale and told him he “deserved that spot because he earned it,” but a slow tempo and lack of command might make Texas turn to Hansen, who has been electric.

He’d love to keep the versatile, loose-armed Hansen in his role as a middle reliever to eat up innings, but his hand might be forced. On Sunday, Merryman did that, trusting his new change-up and pounding the strike zone.

Texas has just six nonconference games remaining against lesser competition before it begins Big 12 play, alas, on the road against streaking 15th-ranked Oklahoma. That will get here soon.

It helps dramatically that the Longhorn hitters were crushing the ball in the series and had 10 hits — including three doubles and Todd’s homer — in the first four innings before letting the team’s strong bullpen take over as it did to help Ty Madden in Saturday’s win.

“Our bullpen has done really well,” said Kennedy, who has joined Todd and Duke Ellis to spearhead an improving offense. “They’ve been working extra hard this week.”

Fullerton’s having tons of offensive woes itself and managed just nine hits in the last two games of this series. The Titans’ four runs came in the first four innings, with the runners coming around after two walks and two hit batters.

Over the last seven innings, Merryman and his buddies silenced Fullerton on just two hits, one of them an infield single.

Merryman left with his 1.74 season ERA and a 3-0 record after his seventh appearance of the year. He was followed by Kamron Fields, Sam Walbridge and his 94-mph fastball, Jared Southard and freshman closer Andre Duplantier II for five clean innings. Cobb was the only one of the seven Longhorn pitchers who walked a batter as they collectively got the job done.

“We’ve got 15 guys out there who can go out and compete,” Merryman said. “They’re dominant, even if the starters have an off day. We can beat anybody in the country, and we’re going to stay hot.”

Even if he doesn’t go all nine.

Bohls: Streak, maybe the season, is over; when is enough enough for Texas, Shaka?