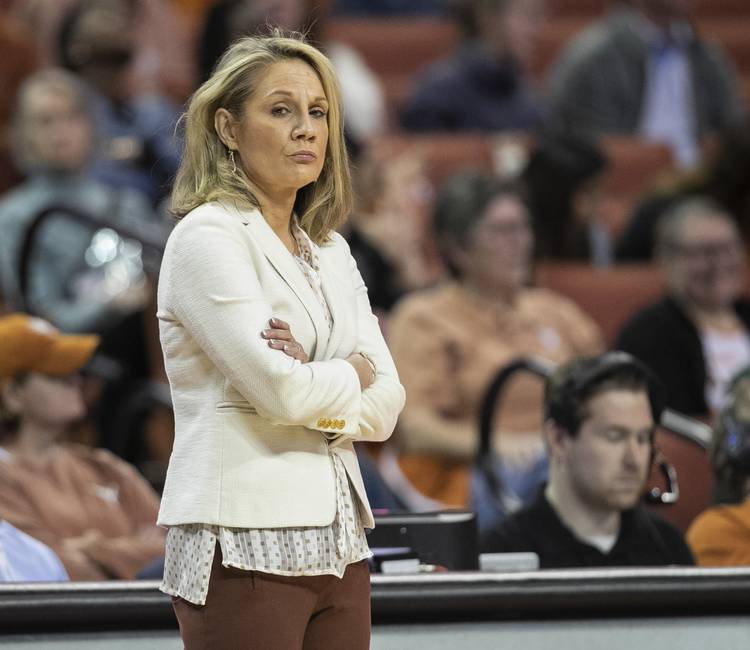 Leadership can come in several forms, and Texas will need each and every one if the Horns hope to win a game in the NCAAs for the first time since 2018.

Karen Aston is short on big players, but she has enough senior leadership to make some noise in the NCAAs.

If those leaders show up like true leaders are apt to do.

Advertisement
All of sudden, “if” just became a word much bigger than those two visible letters, but Aston’s team hasn’t always played to its talent or above the talent of teams it should destroy on paper.
Texas doesn’t always show up.

Oklahoma State, a team of big Cowgirls who aren’t as talented overall as Texas, did hang around for a bit on senior day before the Horns ultimately pulled away Sunday for a 63-52 win on the same afternoon the athletic department retired the No. 24 of Longhorn legend Clarissa Davis (now Davis-Wrightsil).

Three days after another blowout loss to Baylor, the Horns found a little bit of confidence down the stretch against an Oklahoma State team that showed scrappy precision, all the while knowing its season will end without a tourney appearance.

The Horns struggled to put the ball in the basket at times but got enough timely shots from seniors Joyner Holmes and Sug Sutton to avoid what would have been a senior day disaster. As a result, Texas finished the regular season at 19-11 overall and 11-7 (third place) in the Big 12, just behind TCU and miles behind 17-1 Baylor, which is sure to get a No. 1 tourney seed despite an upset loss at Iowa State on Sunday.

The biggest question facing Aston — besides the one on whether she will return for a ninth season as she coaches out the final year of her contract — has to be which Texas team will show up moving forward. Will it be the one that can dominate the paint with bigs Holmes and Charli Collier or the one that turns it over far too often and can’t make timely shots from the perimeter?

It will come down to poise, something we saw Sunday but a trait that has often gone missing away from the Erwin Center.

So how tough is it to coach poise?

“It’s really hard because I think it takes a lot of self discipline sometimes, and, you know, we have some young ones, we have players that really have a great desire to make plays,” Aston said. “And there’s a real fine line with that, and making plays and making the right play.”

The Horns won’t be hosting an NCAA Tournament game, so that mental toughness and poise will have to show itself in a foreign environment.

And that’s where the senior leaders — Holmes, Sutton, Jada Underwood and Lashann Higgs — will have to step up or else it will be a short stay at a long dance.

“It’s not going to change how big it’s been all year long,” Aston said. “I sound like a broken record, but when you have four seniors and then you drop off to inexperience … After that — not that they’re not now — but they haven’t been tournament-tested, so to say, beyond what’s happened, so it’s not really a lot different than what we’ve been depending on them for all year.”

She said she’s not putting everything on the seniors, and she shouldn’t because sophomore Collier and freshman Celeste Taylor will be All-Big 12 first-team selections by the time they’re done here, but the bulk of the player leadership has to be provided from the old heads who have been around the longest.

Looking ahead, the only consistency with Texas is its effort on the defensive end, though the Cowgirls were able to get too many uncontested layups in the half-court set Sunday. Texas has held five of its last 10 opponents to under 40% shooting from the field but has failed to crack 40% seven times over the same stretch.

Over the past two games, the Horns have a .341 shooting percentage and, worse yet, have made only 8 of 38 3-pointers for woeful percentage of .210, including a comatose 3-for-21 against Oklahoma State.

Sutton, the point guard and emotional leader, had been in a real freeze, having made only eight of her last 44 field-goal attempts coming in, but a nice putback late in the game got her going. She finished with 13 points, her first double-digit output in six games.

“I think (the putback) gave me a lot of confidence,” she said. “I seen the ball the ball go through the hoop. I was like, ‘All right, we’re going to keep shooting. They’re going to go in.’ ”

You’re only as good as your leaders, and the Horns can give a good team a tussle and, on the right night, a loss. Are they a national championship contender? Heck no, but they are a talented bunch capable of winning a game or two in the tournament.

But if their leaders don’t show …

Well, we all know the answer to that one.