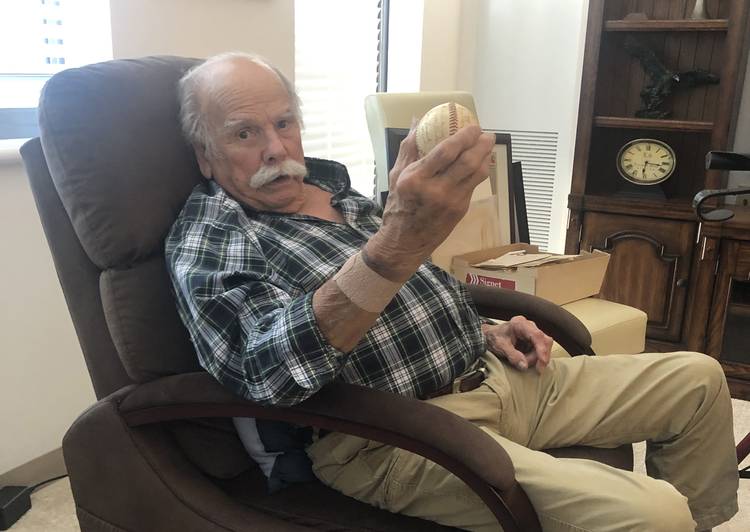 Former Texas baseball star Travis Eckert holds a ball signed by his teammates. He played for the legendary Bibb Falk and was a teammate of the also-legendary Cliff Gustafson. [KIRK BOHLS/AMERICAN-STATESMAN]

He may have caught part of a World Series game or two in the last few years, but when really pressed to name the last time he watched an entire game on television, he was stumped.

That was like paint — or poetry — in motion. He was that good of a player.

His distaste for the game has grown, the longer he’s been away from baseball, so he really won’t miss the start of the season which has been postponed because of the coronavirus pandemic. He prefers to watch college football or NFL games at his new senior living apartment where he’s recuperating from a heart valve procedure.

While the 88-year-old Austin native doesn’t care to watch baseball now because the games are interminably long, but he sure can spin a tale or two about the sport.

He’s a former All-American outfielder at Texas who was inducted into the Longhorn Hall of Honor in the same class as Heisman winner Ricky Williams. Asked how elated he was over that accolade, Eckert tapped his heart over and over and said, “Tok, tok, tok.” He once hit .471 in Southwest Conference play and led the 1953 team to the brink of a national title before Texas fell short against Holy Cross in the College World Series.

He says with unblunted candor that he “was a natural” and might have eventually become a top major-leaguer but for a chronic eye condition and a strong-willed wife who liked baseball even less than he does now.

In fact, after two promising seasons in the Chicago Cubs farm system when he hit well, he was tendered a contract by certified mail in the offseason in 1955 and turned it down. Or rather, his wife Carol did.

“I asked her if she’d seen any mail from the Cubs for me,” Eckert said recently in a lively, no-holds-barred conversation spiced with sharp barbs and strong reminisces. “She said, ‘Oh yes, I tore it up and threw it away. You’re not going to play baseball anymore.’ I said OK.”

And that was the end of his professional baseball career. He was a little more of a pushover back then.

Even though he was a star as a Longhorn as a hitter and a terrific outfielder who could adeptly scale the limestone cliffs in the field of play, stretching from left center to right center at iconic Clark Field across from Royal-Memorial Stadium and rob opponents of extra-base hits, his time as a player was done.

He did stay around the game, however.

So much that he said he founded T-ball in the city when he saw the game being played in Seguin and knew that mothers grew weary of Little League games he coached when raw, young  pitchers would tediously walk 20 batters in a single game.

He coached Ben Crenshaw and Charlie Crenshaw in Little League as well as “the Covert boys.” Says Eckert of the Crenshaws, “They were really good. Charlie was a left-handed pitcher and Ben was the catcher.” Eventually, Charlie became a catcher for Cliff Gustafson’s Longhorns, and Ben wisely turned to golf, where he won a pair of Masters and became a Hall of Famer.

Eckert remained friends with Gus, his former Longhorns teammate, and even held his fire and casualty insurance business as part of his thriving agency.

He was playing center field the day that Gus shattered his leg, trying to turn a double play, and never played again. Gus would ultimately turn to coaching and did OK. Yeah, he became a legend and became the winningest coach in college history before being surpassed by the late Augie Garrido and just-retired Mike Martin of Florida State.

“He was so into every part of the game,” Eckert said, wowed by Gus’ attention to detail and strategy and emphasis on repetition. “As a player? Well, he was a good second baseman. But as a hitter, he wasn’t a good one.”

For Eckert, however, athletics just came naturally. But what didn’t?

What was his best game ever?

“I don’t think I ever had a bad game,” he said with a shrug matter of factly.

As good as he was, he had nervously waited for the crusty, iconic Texas baseball coach Bibb Falk to offer him a scholarship. With two weeks before school was due to begin, Travis’ older brother Booty — who had played for Texas and was an actual hunting and fishing buddy of Falk’s — devised a plan to force the coach’s hand.

The two scrambled to find all the suitcases from family and neighbors they could lay their hands on and piled the empty luggage in Booty’s car to make an impression when they drove by Falk’s house on a Saturday morning. As they pulled up and honked the horn, an inquisitive Falk looked up from his morning paper and asked what they were doing.

“I’m just taking my little brother up to Waco and wanted you to tell him goodbye,” Booty said. “Because you’re not going to see him until he comes down here from Baylor and kicks your ass.”

Falk got off his, uh, own derriere and tendered the younger Eckert an offer. But Falk still had the first nickel he ever earned and only committed to give Travis tuition and fees, forcing Travis live at home without room and board.

“Bibb had more money than Carter had liver pills,” Eckert said, reciting an age-old line from the ‘60s. Falk had been friends in the majors with Ty Cobb, who was great at the stock market and gave him some good advice, “so Bibb never had to worry about money,” Eckert said. As penny-pinching as Falk was, Eckert said he did donate his UT salary to his predecessor Billy Disch’s surviving family.

Of course, Eckert had more than few run-ins with the intimidating, often scowling Falk.

Once when the right-handed Eckert lashed a grand slam over Clark Field’s right-field fence and took his seat on the bench next to Falk — no one else would ever dare sit by him — Falk nodded in Eckert’s way and said, “Swung late, didn’t you?”

Falk was as tight with his compliments as he was his dough.

But he really agitated Eckert when he revealed to scouts Eckert’s life-long condition of missing tear ducts and told them he couldn’t play baseball at night. The scouts all retreated and grew disinterested. Only the Cubs weren’t scared off, probably because they played all day games at Wrigley Field, Eckert says.

Eckert did land a $3,400 bonus from the Cubs and immediately spent it all on a Rocket ’88 Oldsmobile. But he still held a grudge against his old coach.

Eckert spends little time with baseball these days although his son Will tried his hand at the game and his grandson, Travis Eckert Jr., pitched for Oregon State, the same team that surrendered a homer to his grandfather at Omaha.

He has lots of baseball memorabilia, including a baseball signed by his teammates.

He considers the Houston Astros’ sign-stealing shameful and said he thinks they’re “ruining the game” if they cheat in that fashion.

In all likelihood, close friend Bill Hughes will take him sometime this spring to the new Texas Hall of Fame in the north end zone of Royal-Memorial where some of Eckert’s exploits are on display.

“I could hit it so far,” Eckert remembered. “Nobody could beat me. I was the whole thing.”

And a true Austin original.

Just don’t ask him to sit through a whole game.

Golden: NCAA announcement banning fans is only the beginning