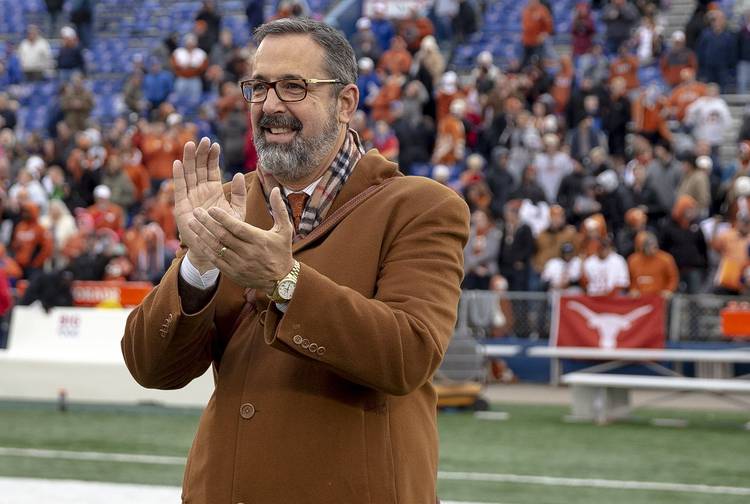 Texas athletics director Chris Del Conte says it's hard to project football's future because "we're in the eye of the storm." [NICK WAGNER/AMERICAN-STATESMAN]

Chris Del Conte was in overdrive this week. Even with nowhere to go.

As Texas’ athletic director, overseeing some 523 student-athletes, he’s having to go full speed even though the part of the sports world that he directs has crawled to a halt during the sweeping coronavirus pandemic.

Of course, Del Conte may feel like he’s on a treadmill at times because he’s not going anywhere like the meetings and sporting events he normally attends and he’s not addressing issues like his two basketball coaches’ murky futures because he said right now he has “bigger issues to fry.”

“You don’t have a manual for something like this,” Del Conte said this week during a taping of our “On Second Thought” podcast. “When 9/11 hit, it took us to our knees. Sports galvanized us. You take that way and it’s kind of like the world stops.”

The sports world has. But Del Conte’s hasn’t.

Like most of his staff of 350, he has remained at home and is already getting on the nerves of his wife, Robin.

Meanwhile, Longhorns athletes run on their own or not at all, either self-quarantined, were sent home to their families or are working out alone. Sports is on hiatus, canceled until further notice. As of Wednesday, Del Conte said no UT athletes, coaches or athletic staff have contracted the virus. “So far, so good,” he said.

Del Conte has been tested, but it came back negative as did UT President Gregory L. Fenves’, even though Fenves’ wife, Carmel, tested positive and is recovering well.

“He told me he’s made out of iron,” Del Conte said of Fenves. “Nothing sticks to him.”

But normalcy remains distant on the horizon.

Coaches don’t have any players to coach.

Players don’t have open gyms or baseball fields or golf courses to train at.

Vendors don’t have beer or nachos to sell.

Stadium workers, ticket-takers, ushers and cleanup crews may all be out of a job.

School administrators are left to pick up the pieces, make sense of a world gone crazy and try to keep calm and order in an otherwise uncertain time.

In short, college sports are in limbo.

Texas, like most schools at any level, has gone to online classes. The dormitories are closed down as Del Conte scrambles to find housing for some of his international student-athletes.

But he reminds that it’s not forever. “This, too, shall pass,” he said.

For now, Texas’ scheduled spring football practices, due to start next week and culminating with an April 25 spring game, are in a state of flux although it’s hard to imagine them being held since the campus is closed. “We haven’t dealt with the (possibility of) spring practice yet. We’ll continue that conversation in the next couple of days,” Del Conte said.

The topic of spring football didn’t even come up Wednesday during a two-hour session with Big 12 commissioner Bob Bowlsby and the conference’s 10 athletic directors. “Nothing to report,” Bowlsby texted.

They batted around the possibility that the NCAA may extend an extra year of eligibility to those athletes who participated in winter and spring sports since none of those sports concluded with their championship events. Del Conte said there was no consensus reached in the informal session, “just a lot of opinions” shared on a subject that carries a myriad ramifications, and they will meet again this week to formulate a Big 12 proposal to the NCAA.

Among other issues, the NCAA membership would have to determine whether to restore a year of eligibility for just seniors or all classifications. Seems to need to be across the board.

It would have to decide whether that should be extended to winter sports athletes who had already completed their regular seasons, especially the 60% of basketball teams who had virtually no chance of making the post-season, or just those who play in the spring.

What would roster limits be considering teams have incoming recruits, “graduated” seniors and others interested in testing the NBA waters?

And, of course, the huge expenditure of approving such a measure would have to be considered by schools, many of which might be hard-pressed to pay their bills without revenue coming in from ticket and concession sales and donations.

“There’s a massive economic equation to this, but that should not drive the opportunity for young people,” Del Conte said, adding the ADs planned to meet again later this week. “There were four or five options to ponder. We were all over the map. We were just spit-balling.”

Some things do continue to go on.

“They’re still ongoing,” he said. “They’re plugging along and still working at it. I’m crossing my fingers.”

Del Conte has so much on his plate, he barely, uh, has time to shave.

In fact, he’s not. He said he’s not taking a razor to his face for the near future with the intent of making a public statement.

“I haven’t shaved since all this started,” he said. “And I will not shave until we have competition for our Longhorns. So you know I’ll be a big ‘Duck Dynasty’ when you come around in the fall. And that is just a hideous visual. … My wife’s not happy about it.”

No one will deny these are hairy moments for coaches and players as well as administrators.

“We’re all getting used to the new normal,” he said.

Such as it is.