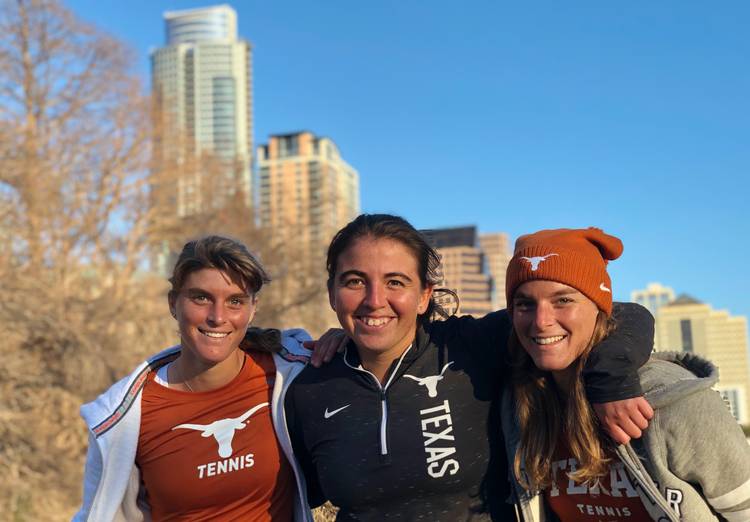 Texas tennis players (from left) Bianca Turati, Fernanda Labrana and Anna Turati have been riding out the coronavirus pandemic in their West Campus apartment. They're the last players from the UT women's tennis team still in Austin. (Courtesy photo)

Their hearts are broken.

Their minds race with all sorts of unchecked imagination amidst the disturbing fears and overwhelming confusion about the unknown.

They wonder if their parents, who are cooped up at home halfway around the world, paralyzed by fear and uncertainty, are maybe keeping troubling information from them to protect them emotionally.

Yet they manage best they can, sequestered in their small West Campus apartment with one of their teammates.

Sometimes, however, Bianca and Anna Turati just break down and cry.

There is little resembling normal about the lives of these two gifted Texas tennis players from coronavirus-wracked Italy. So the two seniors cope without the demanding daily structure of all scholarship athletes and at the same are deeply concerned about their family during the crisis that has infected more than 60,000 Italians and killed more than 5,400, some 1,440 over the last weekend.

“Every day the numbers are going up,” Bianca said. “I get super scared.”

Making sense of this madness amidst a deadly virus that has the entire world in its grip can be exceedingly difficult, especially so for the identical twins from Barzano, Italy where their parents and older sister Sara live about 40 minutes from Milan. All of them, they’re thankful, are healthy.

They are two of college tennis’ best players. Two years ago, Bianca ascended to the No. 1 national ranking, and Anna “is no slouch either,” their coach, Howard Joffe, said. She’s been ranked as high as No. 2. Both had 11-1 records in singles action this spring.

But worry takes no time off.

“Right now, I’m fine,” Anna said over the phone Sunday. “The next five minutes I think about all the crazy stuff going on and …”

The sisters speak to their parents, Giuseppe Turati, 60, and Silvia Morandini, 55, daily via FaceTime and try to both seek and give reassurance. But it’s a challenge when the two 22-year-olds turn on their television in the apartment they share with Chile’s Fernanda Labrana when they are so far from home.

The three Longhorns have grown only closer as they spend every minute together. The Turatis call Labrana “our fourth sister.”

They are just three of about four dozen international student-athletes among Texas’ 523 total. They’re the only three of Joffe’s women’s tennis team, which ranked sixth nationally when the NCAA called off the season, who remain in Austin. Freshman Adri Nagy just left for Hungary. Sophomore Tijana Spasojevic caught the last flight out of the country that was going to Serbia. So, too, did freshman Marta Perez Mur leave, bound for quarantined Spain, which has put a field hospital in a convention center.

In Italy, a country the size of Arizona with an older population and a total of 61 million people, has had more casualties than even China where the coronavirus originated.

The Turatis had been playing some of their best tennis this spring and were poised to make a breakthrough at this year’s NCAA tournament before their season was abruptly canceled like every other collegiate sporting event two weeks ago. Joffe calls the Turatis “the most ferocious” competitors he’s ever coached in his 13 years, five at Texas. Bianca can dominate with her lethal if rare one-handed backhand, but they both never give up on a single point. “Anna’s given to primal screams,” Joffe said.

The personalities of the two couldn’t be more different. Bianca still answers to her high school nickname of Blanche although Joffe calls her a “steady Eddie” who never lets anything faze her. “I associate a Blanche with someone 74 years old living in Florida and playing bingo at 5 every day,” he said. “That fits Bianca to a T.”

“AT,” on the other hand, is the more emotional and passionate one, a firebrand who constantly wears her emotions on her sleeve, on the court and off. She took the news their season was over very hard.

“I’ll never forget the horror on Anna’s face, that that was the last match she’d ever play for Texas,” Joffe said. “That got my waterworks going.”

The duo became immersed in Longhorns lore almost from the minute they got off the plane from Italy. They knew very little English, were thrust into a new environment in a different country, but immediately fell in love with Austin.

They still remember how passionate the fans were at their first football game at Royal-Memorial Stadium. They’d become so infatuated that in their sophomore year they both got tattoos of a Longhorn logo on their left ankles. When they were home in Italy two summers ago, they drove two hours to watch Karen Aston’s women’s basketball team in a tournament.

“Whenever I look on my Instagram, there’s a video of them at basketball games or a swim meet,” Joffe said. “In the truest sense of the word, they’re Longhorns for life.”

But this month when Joffe informed them their seasons — perhaps their college careers, pending NCAA legislation — were over, they struggled to accept it.

“I was just speechless,” Anna said. “I went to the showers and just started crying like a baby. But you think about the whole picture. People are actually dying. I was shocked at what’s going on with the world and realized I shouldn’t be complaining about tennis.”

The Turatis hope to return home to Italy in the next two weeks at some point before the Italian government closes the country’s borders on April 13. Labrana hopes to soon go back to Chile, where she said more than 700 have been infected.

“We’re a small country,” Labrana said, “and we’re not prepared for something like this, so I think it will get worse.”

Until they can go home, they cope by watching action movies on Netflix, playing card games and Just Dance, doing aerobics and trying to beat one another at Mario Kart and online tennis on their screens. Their teammates left them a large supply of food although it’s more difficult to get the barbecue that Anna has loved ever since her first recruiting trip to Austin.

Bianca’s pretty much the designated cook. And she can whip up a mean dish of pasta with rice and veggies, Labrana says.

But their parents rarely leave their minds for long.

“For now, they’re OK,” Bianca said. “They didn’t get the disease, but we have friends who have the virus. Luckily, they’re young. My parents are in complete lockdown and can’t move from the house. There are more and more cases and deaths every day. That’s really worrying.”

Their father is an orthodontist, but can’t tend to his practice except for emergencies. They remain at home. They occasionally take their Havanese dog Otto out for a daily walk. They go to the grocery store twice a week for food and essentials. They read books and play board games. Every evening at 6, they and neighbors go to their open windows and sing the Italian national anthem.

The worry over their family back home never leaves.

“They’re kind of going crazy,” Bianca said. “We’re a very active family. We’re trying to call them every day to distract them a little bit, but they’re bored and they’re worried.”

One day recently when the girls called, they quickly saw that both parents were wearing masks, which totally alarmed them.

“I freaked out,” Bianca said. “I thought they both got it. They calmed me down and said it was just a precaution because one of our dad’s colleagues had congestion. So he stopped going to work. But I don’t know if they’re hiding stuff from us.”

Staying calm can be difficult.

Gone is the routine they had as students and tennis players when Joffe said “every minute of the day is spoken for.” Their days now are relegated to card games and movies and a couple of hours of tennis at the UT Tennis Center or public parks they can find open. Maybe they’ll return for another season if the NCAA restores the final year of eligibility of seniors in all spring sports.

“I can’t accept it ending this year,” Anna said. “I fell in love with this team. That’s why I’m thinking about coming back.”

So is Bianca, but she’s torn between resuming her college career or embarking on a pro career. With talented recruits like Peyton Stearns due to arrive in the fall, Joffe said, “Depending on what comes down from the NCAA, I definitely think having them back is plausible. With the two kids coming in as freshmen, we’d be a shoo-in to be there on the last day or two of the NCAAs.”

Eventually, Bianca wants to coach tennis after her pro career. Anna needs a few more classes than her sister to graduate and eyes a career in sports medicine or physical therapy.

The future just seems so cloudy these days.

“Personally, this has opened my mind about what matters in life,” Anna said. “I try to enjoy the moment and look at the whole picture. Life is much more besides tennis. I don’t know when this will all end. I hope as soon as possible.”