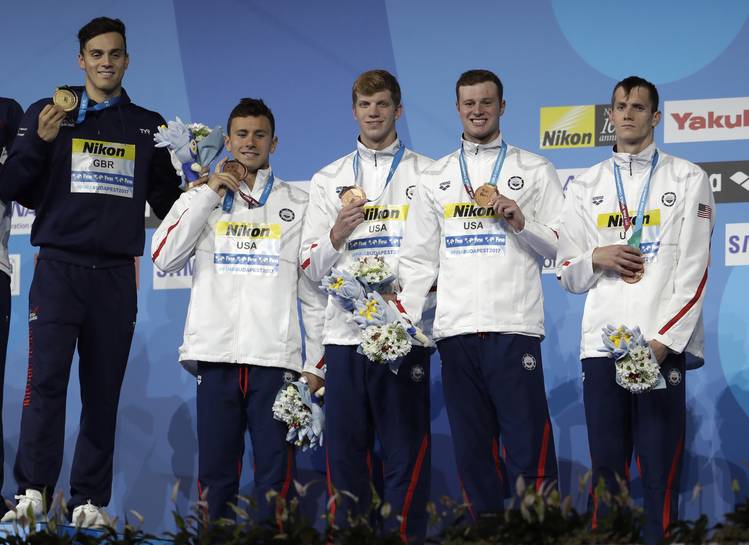 For the past year and a half, Jack Conger’s life had a peaceful, very regimented order about it. But that all took an abrupt if not totally unexpected turn last week when the Olympic swimmer heard the dramatic announcement from the International Olympic Committee.

The news that the 2020 Olympic Games would not be held in Japan this summer and would instead be pushed back a year shook many during this coronavirus pandemic that is sweeping the world.

But the former University of Texas swimmer wasn’t the least bit surprised. He is calmly going with the flow.

“I was happy that they came to the decision, due to the severity of the coronavirus,” Conger said from Virginia in a phone interview. “I think this is something we’re facing as a human race, and it’s going to get a lot worse before it gets better. It’s pretty necessary to take these sorts of drastic steps in order to create change.”

Conger is one of a number of highly decorated ex-Longhorn swimmers whose careers have been put on hold by this global infection that has sickened in excess of 685,000 and killed more than 32,100 worldwide over the past two months.

Former Longhorn teammate Townley Haas, who swam with Conger on the gold medal-winning 4X200 freestyle relay team at the 2016 Olympics in Rio de Janeiro, was training in Austin until that came to a stop because of Austin’s shelter-in-place order.

To both swimmers, it made no sense to try to continue with an international sporting event that expected to draw more than 11,000 athletes from more than 210 countries and expose them to the deadly virus.

“I am happy the IOC came to the decision to postpone the Olympics,” Haas texted. “I believe it was the correct decision to ensure the safety of the athletes and everyone involved. As excited as I was, I’m ready for another year of hard training and can’t wait for next year.”

Another Longhorn, Joseph Schooling, briefly came to Virginia to train before returning to his homeland of Singapore last week. He could not be reached.

Schooling, of course, stunned the swimming world four years ago when he bested Michael Phelps to capture the gold medal in the 100-meter butterfly at Rio and became the first man from his Asian nation to win an Olympic medal of any kind. He became an instant sensation. Singapore threw a parade for him, showered love and attention on him, and even rewarded him with $1 million in Singapore currency, the equivalent of $700,000.

All of these Longhorns stay in constant communication, sharing news about their lives and training through this ordeal while they all hunker down in these shelter-in-place times.

Conger had moved to Charlottesville, Va., in November 2018 with his girl friend, Lexy, wanting to work under Virginia head coach Todd DeSorbo and looking for a change to spark his training. DeSorbo has a great reputation with sprinters, having sent three to Rio, including gold medalist Ryan Held.

It was all going very well for Conger until the virus scare when all pools were closed in his city to interrupt his preparations for the Olympics.

For now, he’s relegated to mostly staying inside with Lexy, who is also a Texas graduate. Occasionally they venture outside for long walks with their catahoula leopard dog, Mox, in the surrounding Virginia hills. Sometimes Conger will get in a workout and even a round of golf, something he really enjoys as a diversion.

Otherwise, it’s a steady diet of Netflix movies and crossword puzzles for them.

“I just thought it was time for a change for me,” the Rockville, Md., native said of his move. “For me, this (Olympic news) is not really a big deal. It’s just another year to get better.”

That said, he’s deeply concerned about the depth of the problem while the medical community worldwide desperately seeks to come up with a vaccine to counteract the virus.

“I really think this is a really, really big problem for the human race,” Conger said. “Drastic measures had to be taken to stop the spread.”

Haas shares his teammate’s worries and hopes as all endure this deadly outbreak and dream of a return to normalcy.

He had been allowed to swim at AquaTex Swim Team in Round Rock until that, too, was shut down and left him without a facility for training.

In the down time, Conger and Haas will seek to manage their lives and be prepared to restart their training as soon as this pandemic passes. Conger said he’ll focus on controlling what he can with proper diet, sleep habits and weight training.

“It’s definitely been tough,” Haas said. “I’ve been lucky enough to have somewhere to swim up until the other day when Austin put up the shelter in place. I’m still able to lift and do some dry land activity, which has been nice. I’m not totally sure when or where I’ll be able to swim next, but we’re working on options.”

Both Conger and Haas are eager to renew their training for the Olympics in 2021, although some of their friends or rivals might contemplate retirement. They were excited about their chances of making the U.S. team despite the heavy competition.

“I thought they were great,” Conger said. “Better than in 2016, really. I’ve gotten faster and stronger. I have a lot of confidence in myself for next year.”

Conger laughed when the memory of the gas station incident was brought up. He admitted he gives little thought to the wild episode in which U.S. swimming teammate Ryan Lochte concocted a story about getting robbed at gunpoint. Conger was detained for a while as the story drew worldwide headlines before he was released and allowed to leave Rio.

“It was an unfortunate circumstance,” Conger said. “That feels like ancient history. I laugh about it every time somebody brings it up. I prefer to dwell on the positive. That was my first Olympic berth, and it’s kept me hungry and working harder. I loved Rio.”

Haas is just 23 after competing in his first Games at age 19. He was almost a four-peat NCAA champion in the 200 freestyle at Texas and remains in his prime.

Conger will turn 26 before the Games go off next summer and doesn’t consider next year his final attempt at making the U.S. team.

“You definitely take the sport in cycles,” said Conger, who got his UT degree in corporate communications. “I haven’t put an expiration date on my career. I don’t think I’ll swim past 30, but I’m not ruling out 2024, depending on how I perform.”

It hasn’t escaped his attention that the 2024 Games will be held in Paris, a city he’s never seen.

For now, he’ll bide his time in his Virginia apartment. Of course, he could also pull out his gold medal for motivation. Well, maybe.

“I don’t know where it is,” Conger said, laughing. “It’s somewhere here in my apartment. But it’s not something I worry about.”

He has more than enough on that plate.