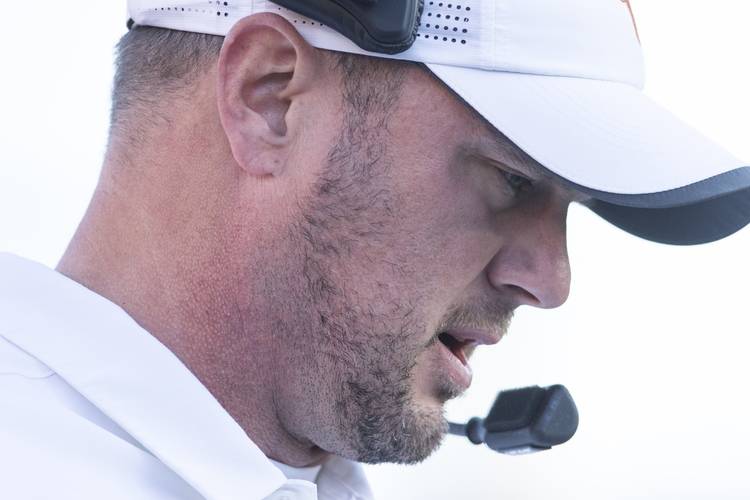 Do you agree with Tom Herman, that there will be a 2020 season?

Bohls: I absolutely do. I think even if the powers that be have to go to a split season stretched over two semesters or a spring-only season, it will still happen. Football’s just that important to the nation’s psyche and athletic department budgets from coast to coast, and will go on even without fans in stadiums.
Golden: Yes, I do because the presidents and athletic directors know that the money will be there whenever they decide to schedule the season. Once the pandemic is contained — whether it’s in May or September — the NCAA will fit its schedule to make sure we have football. That also goes for the other billion-dollar industries of the NBA, MLB and NFL.

Is he right calling scheduling the biggest inequity in college football?

Bohls: Yes he is, because it’s an unlevel playing field with the Big Ten and the SEC playing just eight conference games and the other three Power Five leagues playing nine. You don’t see one NFL team playing 16 games, but another playing 15. Where’s the fairness?
Golden: Yes, I put it right there with the lack of minority hires for athletic director positions, which really hurts the number of qualified head coaching candidates of color who aren’t getting enough interviews. As for scheduling, if the NCAA ever wants anyone to take the idea of an expanded playoff system seriously, it must fix this lack of uniformity.

Should Herman have reservations about such a big staff turnover?

Bohls: Maybe a little more than he does. He doesn’t seem the least bit worried by a staff with seven new assistants, saying the “impact has been much less than I expected.” He may not have to totally re-establish the culture, but chemistry is built over a long haul, and I feel there has to be some growing pains with so many new faces, especially two new coordinators.
Golden: Sure he should because one can ever assume that unfamiliar faces will gel in time to get great success on the field. He’s surely using this time to try and get the staff acclimated to one another. Zoom makes it easier to get everyone in the same virtual room, but ultimate chemistry will have to come in close quarters, and who knows when that will be?

How big does the backup quarterback situation loom for Texas?

Bohls: Huge. Maybe bigger. Herman and new offensive coordinator Mike Yurcich need to come up with a plan to try to determine their 2021 starting quarterback to succeed Sam Ehlinger. Casey Thompson, a redshirt sophomore entering his third season, would appear to be the heir apparent, but if Hudson Card or Ja’Quinden Jackson has the maturity, skill set and leadership qualities to rise to No. 1, any of those three should get some meaningful snaps this fall. But Herman says he’ll “cross that bridge when we come to it.”
Golden: Herman is in good shape experience-wise with Thompson, but the Horns didn’t blow away enough opponents to allow him quality snaps in garbage time last season. I expect newbies Hudson Card and Ja’Quinden Jackson to push him for the backup job if either is as good as advertised. Not having spring football really hurt Card’s case because he hasn’t gotten any live practice reps with his new teammates.

Which part of the team will see the biggest upgrade?

Bohls: Without question, it will be tight end. Herman joked that Kendall Moore had been a guard for two years at Syracuse — “offensive guard,” Herman emphasized — and bragged heavily on Cade Brewer, 6-6 former high school quarterback Jared Wiley, converted tight end Malcolm Epps and four-star recruit Brayden Liebrock. I see a big impact coming from that position, which has been too invisible and produced just 11 receptions a year ago.
Golden: I like running back, where Herman has to be excited with the prospect of having a three-headed monster of Keaontay Ingram, Roschon Johnson and five-star Bijan Robinson running the ball.

Bohls: Not sure anyone could do much better than 8-32 at that lowly Big Ten outpost. Greg Schiano did work miracles there with six winning seasons, however. Ash went 2-14 in his last one season-plus. But sometimes coaches are better coordinators than head coaches, or maybe that record is almost entirely a reflection of Rutgers’ talent level.
Golden: Not really. He isn’t being asked to be the head coach. As a defensive coordinator, he put up some nice numbers for the 2014 national title team at Ohio State, of which Herman served as the OC. Ash has won at a high level as a coordinator and that is the biggest factor working in his favor.

So, how much elite talent does Herman have?

Bohls: We kidded him about that sore spot, if you will. Three consecutive top-10 recruiting classes, though, have built up a strong foundation of talent that Herman should begin drawing upon as he tries to make Texas into a College Football Playoff contender in Year Four.
Golden: He has recruited really well, but good athletes can only become elite if they’re developed well. He has an elite talent in Ehlinger at quarterback, potential elite talent at wideout with Brennon Eagles and if Jordan Whittington can ever stay on the field, he has star potential. Defensively, I’m big on defensive end Joseph Ossai and linebacker DeMarvion Overshown.

Which UT position inspires the least amount of confidence?

Bohls: Linebacker remains a worry. It’s not devoid of ability but very thin. I like Juwan Mitchell’s athleticism, and I’m very high on incoming recruit Prince Dorbah. We assume Joseph Ossai, the star of the Alamo Bowl, will line up mostly at end in the new four-man defensive front.
Golden: With Ossai putting his hand on the ground more as part of that new Jack position, it has to be linebacker. Ayodele Adeoye is the most experienced returner. Mitchell will get better with more reps but Overshown will have to grow up fast after spending last season at safety.

Which relatively new face does Herman seem the highest on?

Bohls: He really seemed to brag on wide receiver Josh Moore, who lost a season when he was suspended after being arrested for carrying a concealed weapon downtown. According to Herman, “he’s totally turned his life around and is turning heads left and right.”
Golden: It’s obviously Moore, who has hopefully put his legal issues in the rear view. He is a volume catcher of the ball, something Texas could really use with the departure of Devin Duvernay.