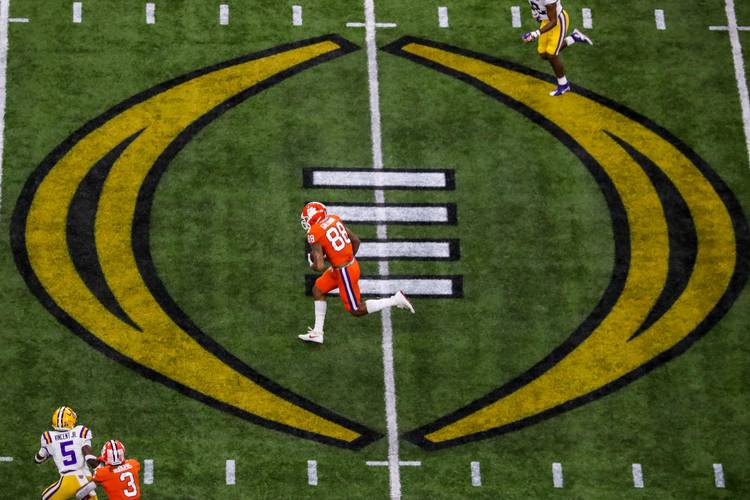 The NCAA just can’t help itself.

One day after its Board of Governors advocated a landmark proposal that would allow student-athletes to profit off their own identity and be compensated for their name, image and likeness, it took a step backward Thursday by not backing a rule that would allow those same athletes in five sports a one-time transfer with immediate eligibility.

Talk about talking out of both sides of their mouths.

And, yes, that would be the same mouths that feed off the sweat, blood and tears of these athletes they’re empowered to serve although some, like Texas athletic director Chris Del Conte, thinks further discussion could lead to a positive legislative vote on both issues in January. Let’s hope so.

“They’ve approved the concept,” Del Conte said of the NIL bill, “but there is some devil in the details. There’s still a long way to go.”

He pushes back against the idea the NCAA is moving far too slowly on these issues.

“We were always of the belief for 100 years in the amateur model,” he said. “Times have changed so quickly. It’s like moving a huge aircraft carrier and say ‘turn right tomorrow’ when we’ve been going left the entire time. It doesn’t happen overnight.”

But the system has had a lot of days and nights to enact change.

There are a million tentacles to this.

Would an athlete make more as one of Alabama’s 22 football starters or Kentucky’s five basketball starters or as one of Louisville’s top three football players or Gonzaga’s best three athletes? How much income tax must athletes pay, and does that give states without an income tax like Texas and Florida a big edge? Coaches already cheat in recruiting, and will this only exacerbate it since no coaches got fired in the FBI-run investigation?

The majority of football and basketball coaches, I would guess, vigorously oppose letting their players change schools and be able to play at their new program instantly. They preach, privately of course, that would breed chaos.

You mean the same chaos that allows coaches to leave at a drop of a hat? Maybe some chaos is needed to shake up the current, one-sided system in place.

But what’s good for a Vic Schaefer should also be good for a Jacob Eason. Why can’t the Georgia quarterback transfer to Washington and play right away rather than sit out the 2018 season when Schaefer can leave Mississippi State and coach the Texas women’s basketball team from Day One? What’s good for the goose …

Those coaches who opposed letting Baker Mayfield leave Texas Tech and enroll at Oklahoma as a walk-on and have to sit out a year see nothing wrong with a system that allows Mike Leach, Lane Kiffin and 22 other new head football coaches this offseason to change their address any time they want and make millions. It smacks of severe hypocrisy.

The NCAA Division I council will vote on these proposals on May 20.

The coaches who resist change want to keep their players hostage to their initial decisions, and that’s patently unfair and un-American. Granted, they worry about wholesale transfers by players upset that they lost a starting job and fell to third on the depth chart or just had a bad week of practice. Sure, some will make mistakes, looking for those greener pastures, but what 18-year-old collegian hasn’t?

Again, it would be a one-time transfer where the players wouldn’t lose a year of eligibility. They can’t repeat the process over and over because their entire eligibility spans just five years.

It’s time to fix all of this unfairness, and the NCAA at least is going down the right path for the most part, if only gradually.

“It’s just the unknowns,” Del Conte said. “Coaches worry about (the effects on) recruiting, an over-inflated value of one’s NIL and what the parameters would be. Is it going to be messy at first? We just don’t know.”

At least the latest NIL ruling offers hope. It will create some unintended consequences, if not a panacea of problems, at first. But if the NCAA were truly looking out for the best interest of its athletes a decade or more ago, it wouldn’t be forced to fast-forward these changes now, so hold the Hallmark cards.

It appears the NCAA will seek de facto anti-trust exemption and want the federal government to help with a uniform, one-size-fits-all standard for all its membership rather than state-by-state legislation that would create all sorts of imbalance. It sounds as if there won’t be financial caps for these athletes, and that’s good. The proposal would also allow for them to have agents, which can be good and bad, but let’s not paint all agents with one unethical brush.

I don’t entirely understand why these athletes cannot be shown in commercials with their schools’ logos. Wouldn’t schools want their logo shown to enhance recruiting or would they want to share in the money? Besides, do you really think no one will know what team Trevor Lawrence plays for?

Adopting new rules that allow athletes to receive payment for endorsements, autograph and memorabilia shows, hold camps and even post a tweet plugging the local pizza parlor are progress.

Yes, I know these same athletes get free tuition, room and board and the benefit of nutritionists, tutors, weight trainers and you name it, but they are the ones whom customers pay to see.

And few of these players are going to get rich. Those who decry an inequality and foresee the rich athletic programs getting even wealthier aren’t seeing the forest that’s already in front of them.

If anything, it might better level the playing field. Who’s to say a wealthy Houston businessman — I won’t say oilman, in this climate — was a Rice booster and pays a player to become an Owl rather than languish on Alabama’s depth chart. Trouble is, that would smack of out-and-out recruiting inducements, and yes they will be hard to control, but they are already happening under the table and under the NCAA’s nose.

The rich will get richer because they always do, but there’s nothing to stop a friendly alum with a pizza parlor in Ames or an insurance company in Lawrence from helping out an Iowa State or Kansas athlete financially.

Del Conte expects outreaches no one can yet imagine.

“There are people at Texas who have come in to school with 500,000 followers on their Instagram account. One was a cheerleader, an influencer,” he said. “A woman on our track team has a tremendous following. What is her true value? Hey, I wholeheartedly believe in and support the concept. But the devil’s in the details.”

But the NCAA doesn’t have to be devilish as well.