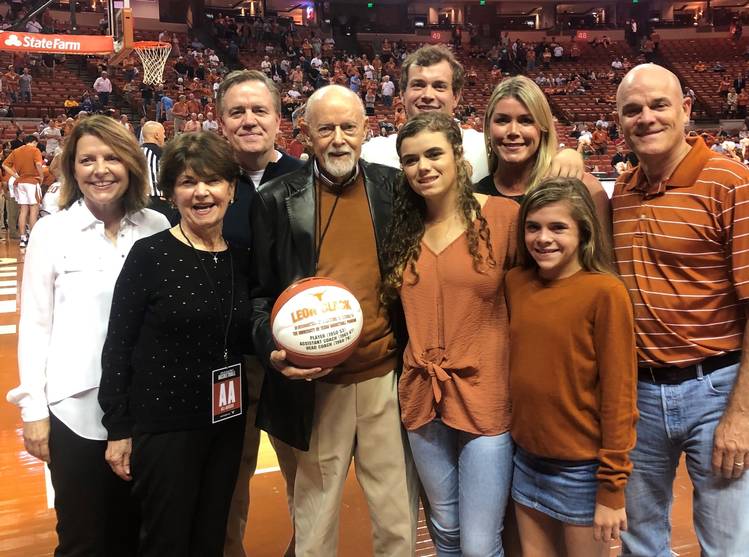 Seems that Leon Black did cuss. At least once.

His Texas basketball team had just been overwhelmed by UCLA sophomore Bill Walton and the eventual national champion Bruins at Pauley Pavilion by 50 points, and Black was giving his team the what-for.

“It was close at halftime, but then they just obliterated us,” Blacklock, the star guard, recalled on Friday. “We were in the dressing room forever, and coach Black was going off and telling us everything we did wrong. But even then every time he said something negative, he’d come back with something positive.”

Finally, a hard knock came at the locker room door. Then another. And still more.

An exasperated Black asked who it was, and the janitor said the coach needed to stop so he could get in to clean.

“The hell I will,” Black responded tersely.

OK, so maybe Black wasn’t perfect and slipped up now and then. And there were the two times he downed a beer when he was in the Army.

Otherwise, he was always a sincere Bible-toting, work ethic-preaching, fundamentals-stressing, and for the most part, non-swearing head coach. He’s been a deacon at Hyde Park Baptist Church for more than half a century and faithfully reads the Bible every night.

“Coach Black was a man’s man,” Blacklock said. “His faith has carried him through life.”

In some respects, Leon Black may have been the best basketball coach in Texas history. Which is saying a mouthful considering he won fewer than half his games in his Longhorns career.

“I didn’t like to lose,” Black said Friday. “But sometimes we were playing with the short end of a stick.”

Like having to stick with exclusively white players at a racially intolerant school. And an antiquated broom closet of a Gregory Gym. And legendary sports publicist Jones Ramsey, who declared the only two sports at the school were football and spring football. And cheating so rampant in recruiting that he turned in the Aggies and enraged their fans so much they’d angrily honk their horns, ring his doorbell and send taxi cabs to his address at all hours of the night.

Otherwise, he had no obstacles to overcome at all.

At least on the court.

Off it, he was a veritable giant among Longhorns head coaches, regardless of the sport. That’s because Black, 88, is as genuine and friendly as they come and has had as profound an impact on the lives of his players, staff, colleagues, reporters and friends as any one who has ever set foot on the Forty Acres.

Even after he got pushed out, he remained on campus in roles ranging from overseeing the swimming pool to compliance and concessions. Despite his ouster as coach, he missed only three home games from 1964 to 2018 and has been an ardent supporter of Shaka Smart, who visited him in the hospital and sent several heartwarming videos.

“He did several things that were pioneering,” said historian Bill Little, who served as the basketball sports information director and noted that Black convinced a Longhorns black track runner, Sam Bradley, to join the team in 1968.

Black deserves immense credit for integrating Texas basketball in 1970, first with Blacklock, a gifted ball-handler and scorer who went on to tour more than 100 countries for 15 years with the Harlem Globetrotters, then with Johnny Moore, and Ovie Dotson, and finally one of the greatest to ever wear the UT uniform in Larry Robinson.

He made it acceptable for blacks to come to Austin. “He treated me just like he’d treat a son,” said Blacklock, who almost went to Michigan State out of Tyler Junior College before choosing UT, where he shared a campus with maybe 100 African-American students. “It was uncomfortable to a degree, and some of the white players didn’t embrace me with open arms except for Lynn Howden, who was such a genuine guy. But Leon was always the same guy, the same then and the same today.”

Black ushered Texas into the modern era, and although he himself was ushered out after a pair of Southwest Conference championships and a milestone upset of Houston in the 1972 NCAA Tournament, he set in motion the underpinnings of the palace that became the Erwin Center.

He’s got no statue on campus.

He’s not synonymous with some of the greats to coach at Texas like Rick Barnes, Tom Penders and the witty, acerbic Abe Lemons, who immediately replaced Black.

But in shaping young men, in setting a proper example, in treating everyone with class and dignity, none stood taller than Leon Black, who over-achieved in every aspect of his life.

“He’s a beautiful person,” Barnes said from Knoxville, Tenn., where he just wrapped up his fifth season coaching the Volunteers. “His light always shined bright.”

Black’s not set his bucket down, as the late Darrell Royal would say, but Leon’s youngest son, Jason, says his father “might be in the fourth quarter of his life.”

Black has heard firsthand how many people he touched. Everyone from Barnes to Moore have told him since he returned home following a 12-day stay in the Heart Hospital after refusing dialysis treatments for his failing kidneys that have been damaged by a blood disease.

He hasn’t contracted the coronavirus infection and has actually gotten stronger the last day or two. But he has endured more than his share of medical struggles with faulty kidneys, high blood pressure and a heart condition.

But he’s always been a fighter, and his doctors wouldn’t be shocked if he recovered.

“Every day, you got to get out there and battle,” Black said from his home, where he actually made it up and down the stairs at his two-story, red-brick home in Northwest Hills. “I just did what I could do.”

That’s the kind of feisty spirit one would suspect from an undersized point guard who played at Texas, could take one step and dunk a basketball and jumped center as a freshman despite his 5-8 height. “And I got most all of the first tips,” he said proudly.

He transferred that gutsy, relentless brand to his players and expected maximum effort.

“He was a hard-nosed coach,” said Moore, one of the school’s best point guards ever before he made a similar name for himself with the San Antonio Spurs, who retired his 00 number. “I’ve got so much love and respect for that man. I’ve always tried to emulate him and be the kind of man he is with God, family and community in that order.”

Oh, but Moore did recall that Black used to carry around a little cup to dispense with his Red Man tobacco at practice. “That was probably his only vice,” he said.

Today, he’s at peace with the world and his time in it, just as he was his entire life since growing up in the Piney Woods of East Texas in the tiny farming community of Martins Mill that has more churches than stoplights.

He accomplished plenty during his nearly nine decades and has left a trail of well-wishers who want Black to know what a profound impact he had on others. He spent a lifetime at a school he adored, and in a sport that has fired every coach it’s had since 1950, and he was truly, wildly successful.

“I love Leon Black,” Barnes said. “As a man, I don’t know I’ve ever met a finer person. He and his wife have lived life (the way) it’s supposed to. He really embraced me when I came to Austin. And we just clicked.”

Which wasn’t that unusual because, well, Black just clicked with most folks.