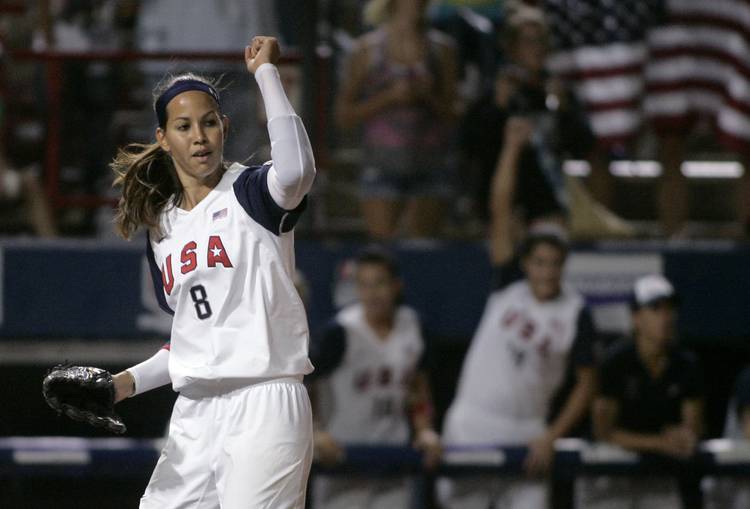 Team USA pitcher Cat Osterman reacts at the final out as the U.S. defeats Australia 3-1 in the 2009 World Cup of Softball championship game in Oklahoma City on July 20, 2009. (Associated Press file photo)

When Cat Osterman was informed the Summer Olympics were being pushed back to 2021, the softball legend had no plans of sitting around for a year.

In true Osterman fashion, she found a way to get back on the field.

Osterman will pitch this summer, but not for Team USA. After parting ways with Texas State, where she had served as a pitching coach for six seasons, Osterman has become the biggest name to sign with the newly-formed sports league Athletes Unlimited, which will start with a four-team softball season taking place over six weeks in Rosemont, Ill. starting on Aug. 17.

Cat is the G.O.A.T. when it comes to women’s athletes from the University of Texas, and even at the tender age of 37 with two Olympic appearances under her belt — she captured gold in 2004 and silver in 2008 — the fire still burns brightly after a career that has spanned three decades.

“I’m super excited to be joining Athletes Unlimited,” Osterman said during a virtual press conference Friday. “Obviously the current state of things altered everything.” Then, later, “I was pretty much set on being done for good after the 2020 Games.”

Plans change, and for Osterman, who has stepped away early before only to return to the sport she made popular by her sheer dominance on the mound, the unique setup of AU sold her after she weighed the commitment of leaving Austin and being away from her husband Joey Ashley and stepdaughter Bracken for six weeks.

“It was a no-brainer,” she said, after some thought.

CEO/co-founder Jon Patricof said players will make a base salary of $10,000 with incentives in place that make $35,000 possible. The league will cover the cost of housing, meals, transportation and training facilities. In some cases, he said, the league will assist players’ families with travel expenses.

Under the league’s configuration, teams will change each week with the top four players given the chance to construct their rosters. Player rankings, which will be updated daily, will come from points earned from team wins and other individual stats, which will give the league a touch of fantasy league intensity.

It’s a brave undertaking, given the current climate, but one that Osterman couldn’t pass up. No league can exist with no-names on the marquee, so bringing in a legend was a must in earning some early credibility.

“I think our first focus from the beginning has always been making sure that we had the highest level of play on the field and making sure that we could attract the best possible athletes and make this a place where the best athletes in the world wanted to compete,” Patricof said. “So that has been our commitment. That is what we are trying to build. And so we were hopeful that players like Cat would join in year one. And that was obviously our desire.”

If Texas built a Mount Rushmore on campus, Osterman would be on it. The lefty went 136-25 with a 0.51 ERA and threw 20 no-hitters in four All-American seasons and led the Longhorns to three College World Series appearances before turning pro, where she captured four NFP championships — one with the Rockford Thunder and three with USSSA Pride.

The 2011 UT Hall of Honor inductee also gets a chance to participate in a league with pitcher Randi Rupp, whom she coached at Texas State. Rupp was one of the initial players to sign on, so she had asked Osterman what she thought about the new league. At that time, Cat was preparing for the Olympics and the pandemic hadn’t yet become the monster it is now.

“She was one of the first texts I had when I finally had decided I was going to sign on,” Osterman said. “Just, you know, ‘Hey, how would you feel (about) playing together’ and she was super excited about it.

“It’s another moment in my softball career where a full circle gets to complete. Obviously, she watched me when she was young, we got to go through the college journey together for her. And then I got to watch her play professionally for the last two years.”

The league is still working on media partners and presumably those all-important sponsorships that keep the bills paid while fans find their way to the product. A six-team indoor volleyball league is scheduled to commence in February with the same scoring/drafting setup as softball next spring in a Southeast city to be named later.

For now, Osterman will start getting that golden arm ready for her new venture, which appears to be a farewell tour of sorts with the Olympics as the grand finale.

Word of warning. We’re talking about a Hall of Famer who lives to play the game, so it would be smart to not completely buy into the farewell talk. It’s Cat, and those of us who know her understand that undying passion for the game.

She may leave, but the door will always remain cracked, just in case.