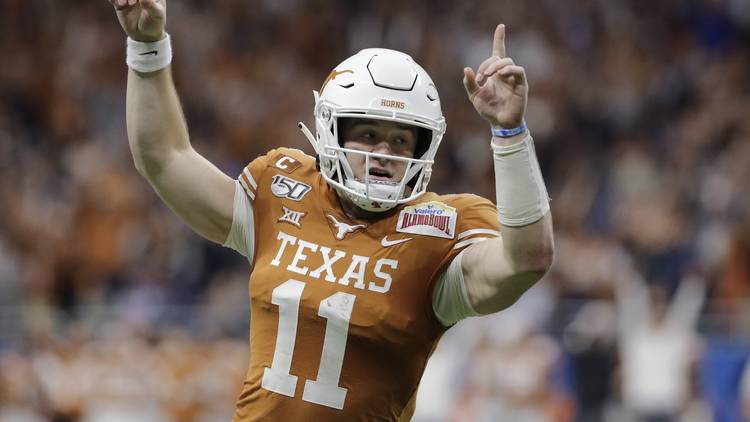 While the Longhorns’ athletic year was incomplete, our annual review is not.

Even though the seasons of 10 Texas sports teams were abruptly halted in March because of the coronavirus pandemic, here is a look back at some of the highs and lows and in-betweens.

Get out your No. 2 pencil and play along.

1. The biggest moment of the Longhorn sports year was:

(a) The win over Utah in the Alamo Bowl

(d) A near-win over LSU in September

Answer: (e) Tom Herman’s stunning makeover of his staff represents the key to his next few seasons.

2. The best Texas athlete was:

Answer: (e) As good as Ehlinger was, Duvernay was more consistent and leaves as the third-best receiver in school history behind only Roy Williams and Jordan Shipley. Jones, as a cancer survivor and good scorer, was by far the most inspiring UT athlete of the year, and White left her mark as a four-time volleyball All-American.

Answer: (c) Eddie sets the standard, had the nation’s No. 1-ranked men’s swimming team and 24 qualifiers for the canceled NCAA championships. Runner-up is Scoggin, the unanimous Big 12 diving coach of the year, an award he’s won 15 times.

4. The biggest disappointment of the year was:

(a) The football loss to LSU

(b) Texas women’s hoops vs. Baylor in Waco

Answer: (d) Although an upset of LSU would have set off Herman’s program, a win over the Cowboys would have given Shaka Smart so much more momentum for next season, but the Horns were never in it and lost by 22. Hello, NCAA bubble.

5. The most moving moment of the year was:

(a) Andrew Jones’ return from cancer

Answer: Tie between (a) and (e) Both emotional scenes brought tears to the eyes and stand as tributes to courage and resolve to make for a better America.

6. The best decision a Texas coach made was:

(b) Inserting energizer Brock Cunningham into the starting lineup

(c) Turning quarterback Roschon Johnson into a running back

(e) Not scheduling Maryland in football

7. The worst coaching decision was:

(a) Leaving Joseph Ossai at linebacker all season

(b) Not moving Courtney Ramey to point guard earlier

(c) Forgetting to pass in the first half against Iowa State

Answer: (a) See No. 6, although Herman’s theatrics were very entertaining.

8. The freshman of the year was:

(a) running back Roschon Johnson

Answer: (a) Johnson saved Texas’ bacon after injuries wiped out running back depth, and Fields was the Big 12 freshman of the year, but Guo killed it as an All-American who finished the year as the nation’s No. 6-ranked golfer.

9. Next year’s freshman of the year will be:

Answer: (b) Brown’s stay may be short but impactful as the prolific Vandegrift star and the surging Jericho Sims and sophomore-to-be Kai Jones give Texas front court depth and versatility.

(a) pitcher Bryce Elder — if he returns

Answer: (c) It had better be Ehlinger, the best returning player in the Big 12, if the football team is to do anything.

11. The best coach who was fired or left was:

Answer: (a) Aston. We loved her tenacity and her personality and wish her well.

12. The best coach who was hired was:

Answer: (c) I’ll be shocked if Schaefer doesn’t have Texas in a Final Four in three years.

13. The most promising athlete was:

Answer: (b) Duplantier is so versatile he could be used in a variety of roles, much like outfielder Doug Hodo III.

14. The biggest off-field news was:

(a) Groundbreaking of Moody Center

(b) Selling of margaritas at the Drum

(c) Austin Todd’s haul of redfish at the coast.

Answer: (a) The new 10,000-seat home scheduled to be done by January 2022 should be a more intimate setting for Austin’s hoop-crazy, uh, yeah, fans.

15. The absence of this person will be missed the most:

(a) Luke Yaklich to Illinois-Chicago

(b) Graduation of Devin Duvernay

Answer: (b) Duvernay cannot be replaced. He was that big a stud.

16. Texas’ biggest deficiency was the:

(a) Lack of a third starting pitcher in baseball

(b) Forgetting to pass versus Iowa State

Answer: (D) We’re still waiting, Shaka. This has to be the year, right?

17. The best performance by a Longhorns opponent was:

(a) Kansas running back Pooka Williams, who ran for 190 yards

(b) Oklahoma wide receiver CeeDee Lamb, who could not be tackled

(c) Kim Mulkey, who refuses to lose to Texas

(b) Texas football loss to Baylor

(e) The West Virginia debacle from above

Answer: (a) May have eliminated a shot at the NCAA Tournament.

19. The biggest near-miss was:

Answer: (c) Elliott’s team was ranked No. 2 at the time and could have claimed his second national championship.

Answer: (e) Mike White’s got it going. His softball team finished No. 1 in the country, went 24-3, beat No. 1 UCLA and No. 2 Washington on consecutive nights and led the nation in hitting with a .376 team average.