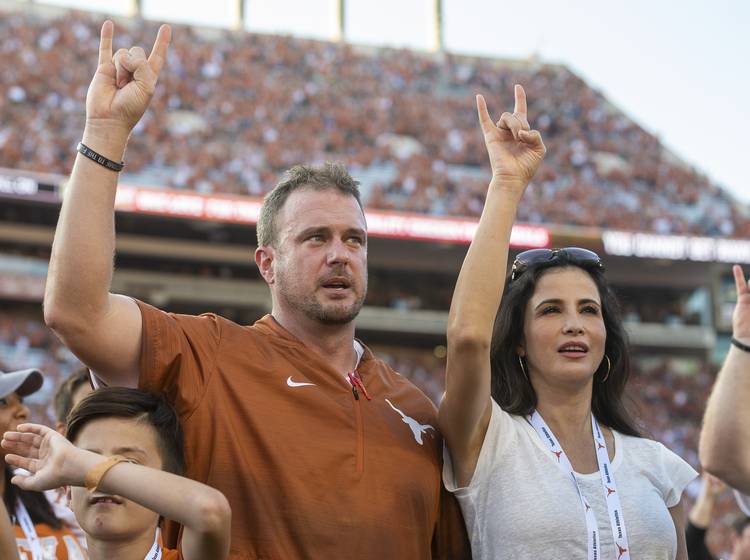 Texas head coach Tom Herman sings "The Eyes of Texas" with his wife, Michelle, after a win over Baylor in 2018. Athletes at Texas have asked the school to stop using the song as its alma mater. [Stephen Spillman for Statesman]

“The Eyes of Texas” won’t go quietly even if it doesn’t represent the same message to all who sing it.

Some have proudly yelled its lyrics to the high heavens before and after sporting contests, at weddings, graduations, parties and in the privacy of their own homes.

And up until this week, we found out that others have sung it through clenched teeth or with a going-through-the-motions-because-it’s-the-tradition-at-Texas tightness in their chests.

When a few dozen University of Texas athletes called for the 117-year-old alma mater to be eliminated days after marching to the State Capitol, the two-page game-changing letter sent shock waves through the state and beyond.

When you start messing with tradition, people take notice.

Interim president Jay Hartzell announced in a statement Monday that he is scheduling meetings with students, leaders of Black student organizations, athletes and community members.

“These letters, calls and petitions come amid the national outrage over the killing of George Floyd and other black people by police,” he wrote. “They reflect the deep pain and frustration that many of you feel about where we are as a society and a university. “

Texas athletic director Chris Del Conte has also said he will meet with the players. To no one’s surprise his voicemail was full on Monday afternoon as was his plate I suspect. The walking suggestion box has undoubtedly been besieged with calls and text messages on top of the countless tweets we’re seeing in his mentions.

The issues outlined are hot topics among fans, media and even alumni but the song is easily the most polarizing of all.

Former Texas player Sam Acho, a Black man long respected as a locker room leader before embarking on a successful NFL career as well as great humanitarian work in America and Nigeria, tweeted his support of the current players, calling them heroes. He also voiced his disapproval of The Eyes of Texas.

“Most black players hated singing that song,” he said. “We were required to. We knew about the racial undertones but didn’t know how to address them.”

I was told by more than one Texas player in the past that the song had racist undertones and that they and high profile athletes in other sports privately refused to sing it.

On the other hand, when I asked Longhorn football legend Eric Metcalf Sunday night if he had heard about any overt racism in the song during his time here in the 1980s, he replied, “Not at all.”

Just like Metcalf — whom I consider a friend and real standup guy to boot — many in the fan base had no idea about the perceived racist ties and some alumni — white and Black alike — would like to see it gone. I’m friends with others who don’t see the harm in it because they were innocently singing its lyrics for the love of the Longhorns and state pride and definitely not to offend Black people.

“I think every song can mean something different to different people by their personal interpretations,” said Texas graduate Sam Mezayek, a white man who was here when Metcalf was on campus. “Nothing will change history but time and education will keep us from repeating it.”

The players were bold in their assertions and their letter was written with the understanding that all responses wouldn’t be positive.

“It’s more than football,” tweeted defensive back Josh Thompson amid criticism in his mentions. “So please stop with the comments like ‘shut up and play football.’ I have a life to live once I hang up my cleats.”

Of all the demands/requests — I don’t even know what to call them — made by the athletes, the “Eyes” is the one that will be the hardest to move, much more difficult than moving those statues on campus or a 350-pound defensive lineman in your path. The song represents tradition to many and tradition doesn’t die easily, even if its origins may not have come from the purest of intentions.

The desire for removal is understandable. White performers in blackface performed it in minstrel shows with lyrics that have connections to Confederate general Robert E. Lee.

It’s different things to different people and the Black players on the 2020 team — perhaps some white as well — are refusing to sing lyrics that remind them of a horrific period that was defined by the dehumanization of Black people in America.

As a person who didn’t attend the University of Texas — I do have a degree from UT Tyler FYI — the song doesn’t engender any sort of school pride in me but hearing it as a kid did evoke some love for the state in which I was raised. I had no idea about any sort of racial undertones.

If it was removed, life wouldn’t stop, Longhorn football wouldn’t stop and neither would the singing for that matter. Many fans and students would continue to belt it out a cappella from the stands, in their tailgates and in their homes. They would fight to keep its memory alive.

And it would live.

It took nearly 100 years to eradicate slavery in this country so it wouldn’t be smart to assume a song that’s the same age as airplanes would just fly away overnight.

The skeptic in me doesn’t see the players winning this “Eyes of Texas” battle. Make it optional at worst.

This is one battle that will be hotly contested but the war? It’s theirs for the taking.

The late Julius Whittier, football’s first Black letterman, will have his name displayed somewhere in that stadium this fall. It’s a no brainer. Without him, there is no Rosey, Earl, Ricky or VY.

The removal of statues honoring members of the Confederacy will happen. Display them in a museum exhibit — out of public view — to remind future generations not to repeat the mistakes of our violent, racist-filled past.

The names of known will eventually be taken off buildings. Get rid of them. Why immortalize bigots who wanted no part of a diverse college campus?

Add the names of Texas graduates whose backgrounds contributed in a positive manner to the school.

Money should be donated to Black causes to further the need for inclusiveness and education of Black history in this country, something our middle school Texas history classes have colossally failed to do. It’s a mere drop in the bucket for a money printing machine, one whose revenue has come largely from the contributions of young Black men.  Vince Young and that 2005 championship team built that north end zone complex at DKR. Don’t get it twisted.

“The student-athletes should be applauded,” said Dan Napier, who grew up in Austin. “Their cause is just and righteous. The melody of the song is from a racist minstrel show, however, the words are kind and honorable. If we get everything but the song changed, we are all winners.”

History can’t change but these young people are out to change their futures. In other words, the next 100 years in America are much bigger than the previous 200.

I stand with them.