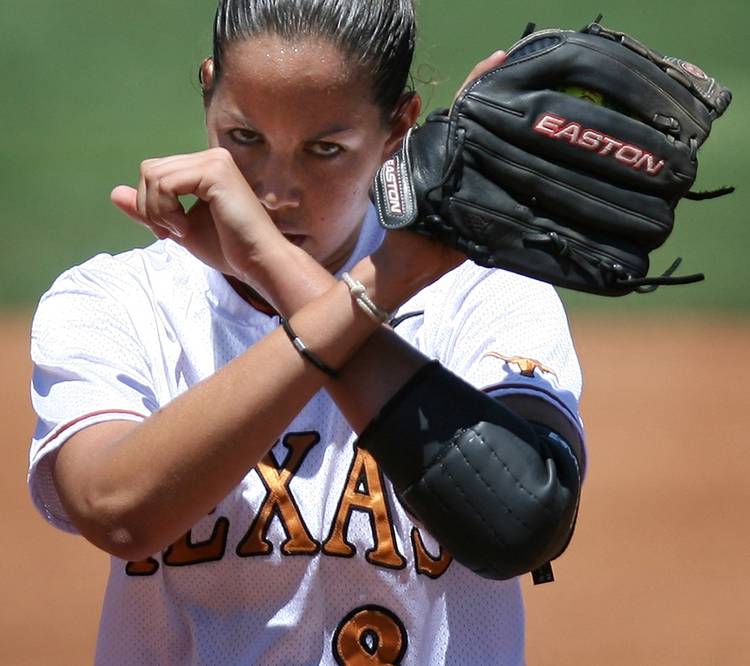 Former Texas All-American Cat Osterman, now 37 years old and working toward her third Olympic Games next summer, led a player revolt this week on her professional fastpitch team. The players all quit in protest of a tweet by the team's general manager. (Jay Janner/American-Statesman file photo)

And then took a stand.

I respect both of her stances.

The former Texas softball star and Olympic gold medalist led a mass walkout of her professional fast-pitch team Tuesday after a furor over an inflammatory, politically charged tweet from the team’s general manager during the Scrap Yard Dawgs’ first game of the summer. So much for a grand reopening of the sport.

What rankled her and her 16 teammates was a well-intended if tone-deaf tweet authored by Dawgs general manager Connie May, accompanied by a picture of the team standing for the national anthem and a shoutout to President Donald Trump. One of those teammates is Kiki Stokes, who is Black and has been with the Dawgs for five years.

Monica Abbott, another Olympian, said the team felt “blindsided” and the tweet showed “uttermost disrespect to my Black teammates, all athletes and supporters. And it is not acceptable.”

Osterman, who at 37 came out of retirement and is preparing for a third Olympic Games next summer in Tokyo, said the players were livid because they felt the tweet politicized the situation and made the team feel as if “we were being used as pawns.”

Hey, look at us, President Trump, the controversial tweet said, along with the picture of the players standing at attention and the words “Everyone respecting the FLAG!”

The team didn’t learn of the tweet until after the game, in which Osterman pitched an inning of relief. They were outraged. Still are, apparently.

So much so that Osterman told me Tuesday that she and her teammates had quit the club. They were out. Done. Finished.

Besides Black Lives Matter and the global protests after so many senseless killings of Blacks, has there been a more polarizing topic the last few years than the national anthem?

As the son of a World War II veteran of the 99th Bomber Group in the U.S. Army, I have always proudly stood — and will — before the flag. I do it out of respect for veterans and out of love for the unified country I hope we will become.

But that’s the same flag before which Colin Kaepernick and others since have knelt, and I respect their right to do so because they have the same freedom of expression and opinion for which our military has sacrificed so much. I’ll continue to stand for the anthem as will Osterman, I presume, and we’ll continue to respect and care for my colleagues and friends who choose not to.

When The Scrap Yard Dawgs, who are based in Montgomery County near The Woodlands, left the field in Florida after their game with USSSA Pride, another pro softball team, they were alerted to the tweet and frankly were stunned that their team was trying to speak for all of them as one collective voice.

This wasn’t NASCAR, where, before Monday’s race at Talladega Superspeedway, drivers walked in unison behind Bubba Wallace, the lone Black driver on the circuit, and they all stood in solidarity before the national anthem. Theirs was a true show of unity, a decision they made together, not orchestrated by the organization.

“We all looked at our phones after the game and were shocked. It was almost paralysis,” Osterman said. “There was an awkward silence, and then I broke the ice.”

May then came into the locker room, and the players “voiced our displeasure. She talked some, but we didn’t have much of a dialogue. Right now we are not Scrap Yard Dawgs. We’re trying to figure out what the next step is, but in the current environment, we feel manipulated.”

Osterman does stand for the national anthem, but she’s not taking a page from the Drew Brees playbook. She has always respected those who kneeled, which is their right in a free country, but she does what’s right for her. Neither one of us considers that action to be unpatriotic because of the social context.

“We’re about standing up with our Black teammates, and we shouldn’t have to represent the organization,” Osterman said. “It was a very terrible situation we were put in. I’m mad, not about the national anthem or the flag, but about the way we were propped up with the tweet representing our views of us as individuals in the times we are in.

“It’s not about the flag or the anthem,” she added. “It’s about opening our eyes, listening, being sensitive to what’s going on. Not being used as pawns.”