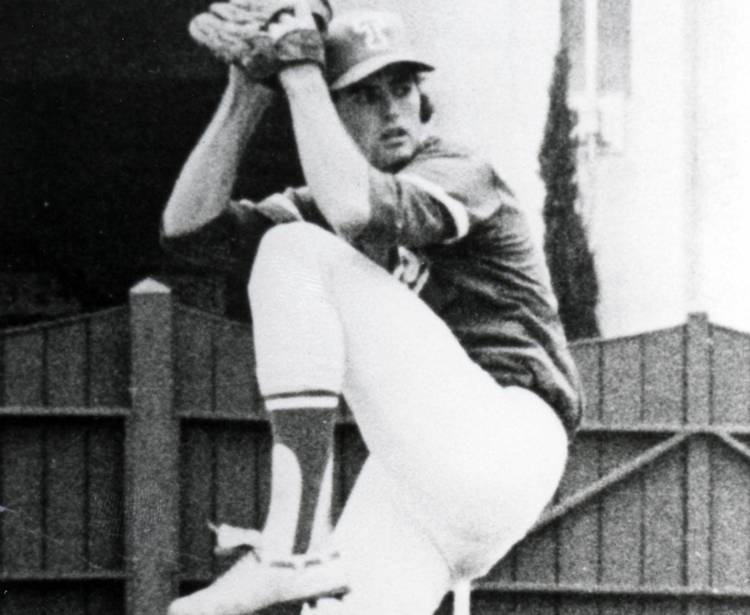 Admittedly, he was nervous, oddly enough.

Jim Gideon had pitched many times before as a freshman and sophomore at Texas and was the new ace of one of the Longhorns’ most talented staffs ever. But those games were at rustic Clark Field, where they might shoehorn in 1,500 fans at the site just across the street from what is now Royal-Memorial Stadium.

On that February day in 1975, Gideon was warming up in the bullpen, preparing to throw the first pitch ever before about 5,000 fans packed into Texas’ brand new Disch-Falk Field that was so gaudy it’d embarrass some major-league ballparks.

Before the introductions, Gideon slipped into the locker room to change shirts and ran into former UT All-American Burt Hooton.

“He was like my idol,” Gideon recalled Thursday. “Here, I’m 20 years old, and he just got out of the World Series (where Hooton’s Los Angeles Dodgers lost to the A’s). And I asked how do you do it. How do you come back and keep winning? Burt’s so unflappable. He just looked at me and said, ‘Because you’re better than they are.’“

Gideon quit stressing after that. Despite going 19-2 the year before, the antsy Gideon overcame that anxiousness and ushered in a new stadium with a 4-0 win over St. Mary’s.

The tall, silky-smooth right-hander would win 16 more games that spring in a perfect season that ended in Omaha with Texas’ third College World Series title and the first of coach Cliff Gustafson’s two national championships.

As Hooton reinforced, Gideon was better than the other guys. Almost always. He won 36 games his last two seasons, threw eight shutouts and paced Texas to a 59-6 record and its first title of the modern era.

And that’s exactly why this gifted pitcher with tremendous command and a dominant mound presence has been selected into the National College Baseball Hall of Fame along with other greats like versatile Minnesota shortstop Paul Molitor and Georgia Tech barrel-chested catcher Jason Varitek.

As for his place in the pantheon of Longhorns luminaries, the 66-year-old Taylor native who still lives in Austin after a career in health insurance knows the pecking order.

“At UT, you have Hooton because he is the king,” Gideon said. “We’re all measured from there. He was the greatest college pitcher of all time. Obviously, Greg Swindell is right there. Kirk Dressendorfer, Richard Wortham and myself probably fall in behind there. It’s a good crowd to be associated with.”

Gideon and Wortham, in fact, have to rank as one of the best one-two pitching tandems on the same staff in college baseball history. Between them, they won a staggering 90 games, an NCAA-record 50 by Wortham, a left-hander from Odessa. Gideon won 40, a three-year star out of Houston Bellaire where he once beat Texas Rangers phenom David Clyde of Houston Westchester twice, the lefty’s only two high school defeats.

Maybe Arizona State can compare with a pairing of Eddie Bane and Floyd Bannister or UCLA with 2011 draftees Gerrit Cole and Trevor Bauer, but few others, save probably Texas’ own Calvin Schiraldi and Roger Clemens with Mike Capel as a strong No. 3 on the 1983 staff.

Gideon joins 11 other Longhorns players and coaches in the Hall of Fame, including incredibly a record six pitchers in that prestigious company. No other program has more than two, which USC, Miami and Wichita State boast.

“I’d say it’s about time,” said former UT third baseman Keith Moreland, a teammate of Wortham and Gideon and a Hall of Famer himself. “It’s a cool thing. My biggest thing was he had really good stuff, but it wasn’t that he threw harder than everybody. He wasn’t overpowering, but he had tremendous command. A great demeanor and calm. That’s why his nickname was Ice.”

Few pitchers cooled off opposing bats like Gideon, who finished his three-year college career in 1975 with just six losses, four of them as a freshman and three of those in relief. He had such an economical style, patterning his mechanics after the drop-and-drag style of Tom Seaver, the Mets star Gideon studied on television during the 1969 World Series.

Throw strikes and throw low in the strike zone, bending the right knee and dragging the back toe to keep pitches down. It was a style he perfected and one he used to throw a no-hitter against SMU at the dumpy, city-owned Riverchon Park in Dallas where the grass was about “U.S. Open rough-high” and a grounder wouldn’t think of leaving the infield.

Gideon would pitch so often at Texas that he’d frequently finish up a seven-inning complete game and, fortified by a Coke and a candy bar in between, win a game in relief in the nightcap. Ten of his 19 wins as a sophomore came in back-to-back victories in doubleheaders, a formula Longhorns assistant Bill Bethea chided him for as a victory vulture.

“I can’t think of a time after my freshman year that Coach Gus ever came out and took the ball out of my hands,” Gideon said. “Gus rode his horses.”

As Moreland reminded, “There was no pitch count back then.”

No pitching coach either. Gideon was groomed by the legendary Ray Knoblauch at Bellaire, where the coaching legend won 598 games and four state titles, one with Gideon. But he also credits summer-league pitching coach Robert “Bus” Campbell of the Boulder Collegians with giving him some key advice after his freshman season.

“He turned around my career,” Gideon said of the late Colorado pitching coach who also tutored Goose Gossage, Roy Halladay, Brad Lidge and dozens more. “He just settled me down and got me to slow down. He told me I was over-throwing.”

That was all he needed for his college career to take off. He relaxed, trusted his stuff, relied on the fastball down low in the strike zone, counted on “three or four runs from Moreland every game” and pitched himself to glory.

Professional baseball wasn’t so kind. Despite being drafted with the 17th pick of the Texas Rangers, he managed just one major-league start in his career before a debilitating neck condition from a teenage car wreck resurfaced, wrecked his shoulder and put a stop to his pitching. He didn’t keep the ball. Figured there’d be plenty more chances.

“Yeah, just one game,” Gideon said, laughing. “As Abe Lemons would say, one more than a dead man.”