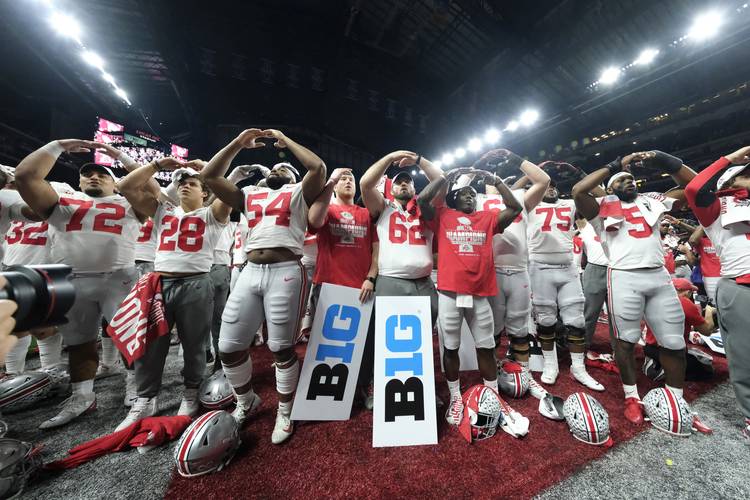 Ohio State players celebrate the team's 34-21 win over Wisconsin in the 2019 Big Ten championship game. The Big Ten won't play football this fall because of concerns about COVID-19, becoming the first of college sports' power conferences to yield to the pandemic. (AJ Mast/The Associated Press)

The Power Five doesn’t feel as powerful as it did a couple of weeks ago.

And for some, no football.

The Big 12, SEC, Big Ten, PAC-12 and ACC have historically represented a strong, united public face in major matters that have defined their sports — especially the football cash cow —  but the coronavirus pandemic brought about some change and an erosion of the monolithic view most college aficionados had of the biggest power brokers in collegiate athletics.

We all knew once the Big Ten announced there would be no football for its conference that the Pac-12 wouldn’t be far behind. Those two leagues and longtime Rose Bowl rivals are connected. The major programs in the South are the ones with the real juice at present.

A permanent rift in the Power FIve is unlikely because the money will be there once the world returns to normal, but for now, it’s obvious we’re witnessing history in the making.

The prospect of three Power Five leagues opening up in September while two sit home has to be a real gut punch to proponents of having a season in traditional powerhouse programs like Ohio State, Michigan, Penn State, USC and Nebraska, where school officials and head coach Scott Frost publicly voiced their displeasure with the Big Ten’s discipline to not play.

“Based on the conversations with our medical experts, we continue to strongly believe the absolute safest place for our student-athletes is within the rigorous safety protocols, testing procedures and the structure and support provided by Husker Athletics,” the Nebraska statement read.

The Big 12’s intention to play this fall played in favorable fashion with many who are starved for football  while others are still concerned that the safety and welfare of players are being overlooked in the desire for the almighty dollar.

As for the relationship between conference leaders, there were signs of a lack of communication last month when Big Ten Commissioner Kevin Warren announced his league would be going to a conference-only seasons for fall sports. What we didn’t know was that on a conference call with others earlier in the day — including Big 12 Commissioner Bob Bowlsby  — he didn’t mention his league would be making such a major announcement later, according to Bowlsby.

It was a startling admission about the lack of communication between two commissioners who were on the same team.

Bowlsby said in a Zoom teleconference on Wednesday that Power Five commissioners have been communicating at least six times a week since the coronavirus became a household term in March. Oh, to be a fly on the wall in those Zoom chats.

“We actually spend a lot more time collaborating than we do anything else,” Bowlsby said. “We speak very regularly. We share challenges in common.”

The biggest surprise on Tuesday was the Big 12 announcing its intentions before the ACC and the SEC. The league’s slowness to action has been well documented, but this was a huge dose of credibility for the only Power Five league with fewer than 12 members.

And Big 12 fans, we may never know which schools in your 10-team league wanted to cancel football.  I’ll always wonder if eight teams said no and Texas and Oklahoma voted yes. That would make perfect sense if the sport was called electoral college football since the Longhorns and Sooners carry the most stroke.

Either way, our view of the Power Five is forever changed. Major decisions were made and for once, the organization didn’t leave a conversation uniform in its decision.

We’re still a month away from the opener and this remains a fluid situation. Let’s not dismiss the notion that one league might call a halt before the season concludes if too many positives happen.

If that happens, what of the others?

Spoken like someone who recognizes that the Power Five is forever changed.