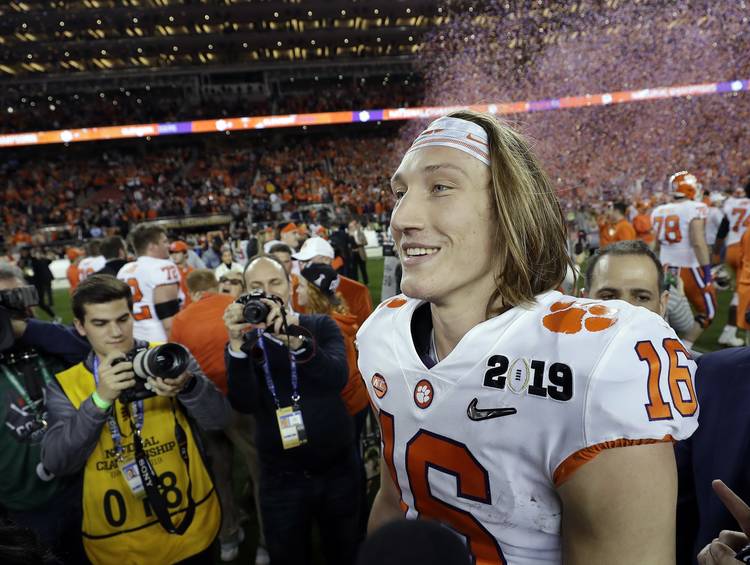 Clemson quarterback Trevor Lawrence celebrates after defeating Alabama for the 2018 national championship. Lawrence, in what’s likely his final year in college, has been pushing to play this year via his social channels. [David J. Phillip/The Associated Press]

No football for the Big Ten and Pac-12 this fall. Pigskin season is still a go for the Big 12, SEC and ACC. American-Statesman columnists Kirk Bohls and Cedric Golden weigh in on this week’s version of college football for 2020.

Bohls: Time will tell, but I don’t have a problem with them hanging onto the possibility of playing. I didn’t really understand the sense of urgency by the Big Ten and Pac-12. I don’t see the harm in waiting another two or three weeks although Big 12 commissioner Bob Bowlsby said the league presidents and chancellors haven’t named a specific future date to re-examine their decision.

Golden: No, smart would have been to take the safe route and postpone the season until the spring, but these 39 schools and their leadership believe they have the protocols in place to make football season happen. It was definitely a polarizing decision, but I wouldn’t characterize it as a smart one. With that said, there are so many variables at play here.

2. Will the bad optics hurt those leagues if there are spikes and game disruptions?

Bohls: Absolutely. Those three conferences will be vilified if there are severe outbreaks among teams, widespread cancellations of games and a lot of angry parents upset that their kids are being exploited in a money grab. Conversely, if the three leagues pull off a season without a hitch, the Big Ten and Pac-12 will be diminished moving forward and could suffer in recruiting circles.

Golden: Of course because the “I-told-you-so“ crowd is just waiting to pounce as soon as one of these teams suffers an outbreak which isn’t just possible but probable. The decision was obviously made with the understanding that these schools are dealing with the very specter of the unknown. Disruptions and spikes will happen but how they handle them will determine if this season turns out to be a success or an unmitigated disaster.

3. Could two of those three leagues still play if one more conference bows out?

Bohls: I don’t see it. I just can’t see two conferences go it alone because that would mean as few as 24 or 28 of the 130 Football Bowl Subdivision teams (depending on which two leagues) would be competing. That would be a terrible look for those two leagues.

Golden: They could because any decision to bow out would likely be predicated on several teams in a conference having an outbreak. So if the Big 12 had an outbreak and the ACC and the SEC were having minimal problems with the virus, then I would expect those two leagues to finish out their schedules.

4. Should players get an extra year of eligibility if the season is reduced to six games or fewer?

Bohls: I’d say yes. I favor most things that support these players, given the risks they are taking. If the seasons are effectively canceled with no games or only a few played, they deserve an extra year. But many of these seniors presumably would move on with their lives.

Golden: I don’t think so because in the grand scheme, really bad teams shouldn’t be rewarded because a season came to a halt prematurely. If Team A is 1-5 after six games, why give them another 12 games when it was obvious they were not going to challenge for a conference title? Makes no sense.

5. How do you rationalize different opinions by medical advisory boards of the Power Five conferences?

Bohls: That’s probably the most curious and perhaps troubling factor in this whole equation. The Pac-12 medical representative said Tuesday that all five leagues are sharing medical and scientific information, but they are clearly not reading the same tea leaves. And there’s varying degrees of how much risk the five conferences are willing to accept.

Golden: The doctors and scientists know of what they speak, but when it comes to the football season, it’s like the Bible: You take from the message what you want and apply it to your own situation. In short, people hear what they want to hear.

6. Will there be a College Football Playoff and a legitimate champion?

Bohls: Assuming the three leagues and some Group of Five conferences can safely play a majority of their games and are not shut down in December, I think we will see a playoff. The ratings would skyrocket. The winner would be as legitimate as any other champion in these turbulent times. If the NBA, NHL and MLB can crown champions with abbreviated schedules, why shouldn’t the surviving football team in January claim a bona fide championship. Hey, lots of teams have claimed mythical championships as far back as 1919 when four teams, including Texas A&M were recognized as champions.

Golden: There will be a champion in one shape or form but who will figure out this mess if we end up having two seasons, assuming the spring season happens for the Pac-12 and Big Ten? One thing is for certain: The conferences down South will have no problem with the powerful Ohio State Buckeyes not being a part of the 2020 fall mix.

7. Did the Big 12 improve its Q rating among the Power Five conferences?

Bohls: It absolutely did. I really think the Big 12 vastly raised its profile and image by standing strong and linking itself alongside the SEC and ACC. To many, the Big 12 was the linchpin in this whole “Let’s Save Football” movement as the sport teetered on the brink of doom for the fall.

Golden: I believe so because the league went out and made what was viewed in many circles as an unpopular call all the while knowing there would be massive fallout. Commissioner Bob Bowlsby knows the potential for disaster is there but his presidents made a really tough decision and didn’t wait for the others to take the lead on this.

8. Does Nebraska play this fall?

Bohls: Only in intramurals. Actually, no, not even in intrasquad games. I’m assuming Big Ten and Pac-12 football teams won’t practice since they don’t feel it’s safe to play in games. The Cornhuskers are clearly unhappy campers and may be looking for escape clauses in their grant-of-rights agreements that last through 2022-2023. Bowlsby said the Big 12 has not been approached by its former member.

Golden: Could we get Texas and Nebraska in the opener? I can dream, can’t I? Seriously, the Huskers are beyond livid that the Big Ten decided against playing and it leaves the program with few options other than scheduling as many non-conference games as possible. The guess here is the Huskers don’t play a down in 2020. The program would miss out on a $50 million revenue share that comes with being a member of the Big Ten. The Huskers aren’t going anywhere.

9. If you were a player, would you play?

Bohls: I would. But then I was once stupid enough to play the second half of a high school football game with a first-half injury that turned out to be a broken neck. Just kind of how I roll.

Golden: You know you’re asking someone who hasn’t sat down in a restaurant since March. While I get the indestructible argument when it comes to kids in their late teens and early 20s, I would make the safe choice and sit the season, especially if I was a potential NFL star like Clemson QB Trevor Lawrence. While we know some things about how the virus is transmitted, we still don’t have all the facts when it comes to how a positive test at a young age will affect a person later in life.

10. Do you expect a full season to be played out?

Bohls: I do not, and it pains me to write that. I hope against hope we will see a complete season, but when has anything ever gone as scheduled in 2020?

Golden: I do not. There really are no guarantees that it will even start. It’s still a month before the season opener and a lot can happen between now and then, especially when students return to campus — changing the social dynamic around town — and practices start to ratchet up.