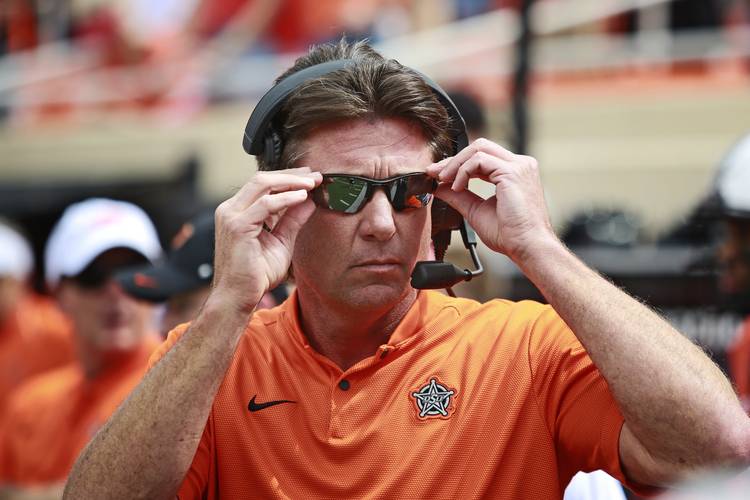 Head Coach Mike Gundy of the Oklahoma State Cowboys adjust his glasses before the game against the Boise State Broncos at Boone Pickens Stadium on September 15, 2018 in Stillwater, Oklahoma. The Cowboys defeated the Broncos 44-21. (Photo by Brett Deering/Getty Images)

Football season revs its engine Saturday with a slate of games. That means it’s time to return to Craven’s Corner, a sports gambling column. This debuted last season with a winning record. We’ll push our luck for one more season betting on games, future champions and the score totals with an over or under bet. We posted a 70-61-4 record against the spread last year.  We also won future bets by picking Ohio State to win the Big Ten, Memphis winning the AAC and the Baltimore Ravens winning the AFC North.

Oklahoma State +700 to win Big 12: Oklahoma enters the 2020 season as the -120 favorite. Texas is the second favorite with +180 odds. My preference is to chase a bigger payday with a dark horse like Oklahoma State or Iowa State at +1100. My money is on Oklahoma State because of the offensive firepower surrounding quarterback Spencer Sanders, including running back Chuba Hubbard and wide receiver Tylan Wallace. The defense is good enough to win the Big 12. Consistency is my major concern with any team coached by Mike Gundy, but the odds are big enough to take a chance in a year that should be crazy and unpredictable.

Florida +1000 to win SEC: Alabama is the -125 favorite to win the SEC. Georgia is next at +200 with LSU third at +700. The Crimson Tide aren’t a bad bet here if you believe Alabama will run the table. Georgia is also an acceptable bet. I’ll avoid LSU because of the amount of productivity lost from last season’s championship squad. I’ll chase the odds with Florida, however, because the Gators return quarterback Kyle Trask and head coach Dan Mullen. A limited offseason means it might be tough for new quarterbacks to find a rhythm. I’ll take the Gators to win the SEC East, meaning I could walk into the SEC Championship Game with Florida at +1000, which will be better odds than I’d get if I waited for Florida to reach the game.

Clemson -500 to win the ACC: This goes against my method for future bets, but let me explain: I plan on recouping the potential money I could lose on my Oklahoma State and Florida bets by taking Clemson to win the ACC, which I consider a near certainty if the season finishes without a hiccup. Quarterback Trevor Lawrence likely becomes the first pick in the 2021 NFL Draft. The team is loaded with blue chip recruits, and the rest of the ACC simply can’t compete with that type of talent on a consistent basis. Mack Brown’s North Carolina squad carries the second-best odds at +800.

Navy -1 over BYU: This is the best game, at least on paper, of the opening weekend contests. It takes place Monday night. I like Navy here because of its offense. A weird offseason and summer camp makes me believe it’ll be easier to install the option offense than a normal offense, giving Navy an advantage as BYU finds its rhythm. The first few weeks of the season are always crapshoots, though, so bet lower money amounts than normal until more information is available.

Army -4 over Middle Tennessee State: I’m taking Army in a contest I’m excited to watch for many of the same reasons that I’m taking Navy over BYU. The option offense is easier to install in a short amount of time given the experience most of the players on Army’s offense have within the scheme. I also trust military students to compartmentalize distractions better than the average college-aged player. Overcoming adversity is preached at Army on and off the football field.

SMU/Texas State Under 67.5: Taking the under goes against my instincts and better judgement, but it is the smart play for this game considering SMU is favored by 21.5 points. That’s too much for me to give or take in the first week of the season, but I do expect a sloppy game at times because of the jitters. First games are usually sloppy. I expect that to be even more true given the weirdness of the offseason and summer camp. Give me SMU to win, but it’ll be a low-scoring affair. I’m probably leaning toward Texas State covering the 21.5-point spread because I expect lower scores than I would if these two squads played a month later.

Golden: In my crystal ball, I see Texas … winning the Big 12? Let’s go game by game