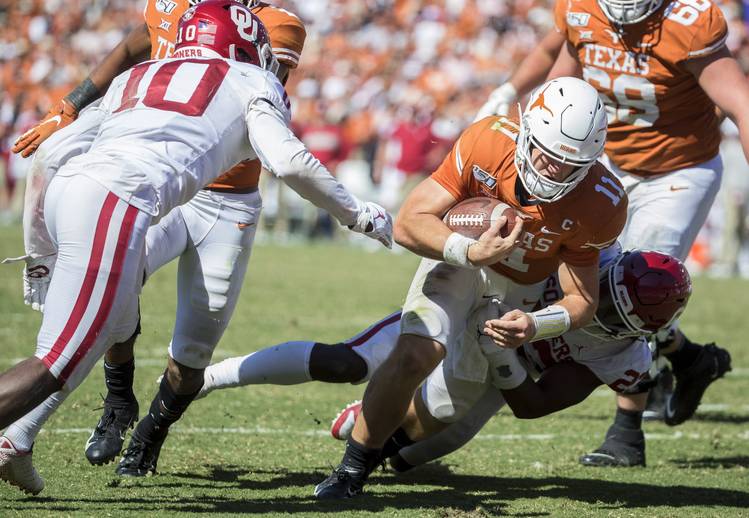 Texas Longhorns quarterback Sam Ehlinger (11) runs in the end zone for a score against Oklahoma Sooners in 2019. Expect Ehlinger to meet up with the Sooners twice in 2020. RICARDO B. BRAZZIELL / AMERICAN-STATESMAN

A Big 12 title chance will be there at the end and the Horns have enough experience to navigate through the most unique of seasons.

Coaches would never attempt to predict where a team might end up, but since I own an Apple Macbook Pro, why not attempt to break down the upcoming season with game-by-game predictions?

Bevo Boulevard is empty in front of DKR next Saturday, but the Horns open the season with a solid win over an overmatched opponent. Quarterback Sam Ehlinger plays game manager in this one, deftly spreading the ball around to his bevy of weapons. Running back Keaontay Ingram looks big and fast and gets into the end zone twice.

The Horns walk off the field with no major injuries in the 42-10 win. Most of the 25,000 fans rise for the “Eyes of Texas” post-game. Some players sing. Others don’t.

AT&T Jones Stadium is a beehive on Sept. 26, and even though little is expected of the Red Raiders this season, they jump out to an early lead against the sleepy Horns.

Tech is better than last season but the Horns have too much offense. Ehlinger connects with Brennan Eagles for a short touchdown pass then scores again in the red zone on a run, and the Horns hold off a late rally to take out Tech, 45-31. It’s Texas’ first 2-0 start in the Tom Herman era.

Let’s call it Sammy’s revenge.  Ehlinger threw four touchdowns in last season’s 37-27 loss in Fort Worth, but the Texas quarterback is ready this time. He throws for 297 yards with a pair of touchdowns to Jake Smith and the Horns play their most complete game of the early season with a 30-24 win over the Horned Frogs.

The defense notches three sacks and  get a touchdown in the win.

Big 12 linchpin Oklahoma doesn’t have a proven superstar at quarterback in the first time in like forever, but Lincoln Riley is an offensive genius.  It’s not to say that Spencer Rattler won’t prove venomous to the opposition, but that he just hasn’t shown it in college yet.

It’s a classic in Dallas minus the State Fair pageantry and the Horns figure it out at the end for a 43-37 win in a thriller. The Horns are tied with Oklahoma State for first place in the league and are 4-0 for the first time since 2012.

The defense needed that bye week after getting banged up in a physical battle against Oklahoma. Baylor has some nice players, but new coach Dave Aranda has a real challenge on his hands in Waco, especially on defense, where Ehlinger is able to find some holes in that inexperienced defense. He throws three touchdowns in the first half and the rout is on.

The Horns aren’t as impressive in the second half, but Baylor doesn’t have the horses to keep close despite a gutty performance by quarterback Charlie Brewer. Running back Roschon Johnson has a big second half and the Horns roll to a 41-17 win. ESPN College Game Day announces plans to be in Stillwater next week for Texas-Oklahoma State.

Better Texas teams than the 2020 crew have stepped into an ambush at Boone Pickens Stadium and the Longhorns get hit in the mouth before a nationally televised audience.

Oklahoma State running back Chuba Hubbard is on pace to run for 2,000-plus yards for the second straight season and he gets his early and often against a good Texas defense. He finishes with 185 yards.

Texas runs for 180 yards as a team but a pair of turnovers halts some potential momentum-securing drives. The 42-35 loss takes away a huge opportunity for Texas to create separation atop the conference.

The Mountaineers are not much better than the 5-7 bunch from last season and coach Neal Brown has gone back and forth between transfer Seth Doege and Austin Kendall.

Ehlinger gets some needed rest in the fourth quarter and sophomore Casey Thompson looks good in mop-up duty. The Horns are feeling good after a 48-27 win.

This is one of those games where everybody eats, to steal a phrase from the kids. DeMarvion Overshown gets into the backfield for a pair of sacks and Caden Sterns has his best game of the season at safety.

Kansas hasn’t won since the opener over Coastal Carolina and this season can’t end soon enough. The Horns go wire to wire in a 55-7 win.

It’s a real gut check for Texas against an Iowa State team which has an outside shot at winning the Big 12 if it can pull of a win at DKR.

Ehlinger sputters early but finds a groove in the third quarter as he uses his legs to keep the Horns out front. Iowa State quarterback Brock Purdy has NFL aspirations and makes some eye-opening plays, but the Horns get a late turnover and a last-minute field gaol from Cameron Dicker to eke out a 31-28 win.

The Horns may have bought too much into the talk of making it into the College Football Playoff and it shows in their most sluggish offensive performance in weeks.

The Wildcats were expected to struggle after losing 28 seniors — 15 of them starters —  off last season’s surprising 8-5 team, but they have proven to be a tough out in the Little Apple.

The defense rides to the rescue late for the second straight week. Josh Thompson grabs two interceptions and Joseph Ossai forces a fumble deep in K-State territory. The Horns grab a 27-21 win and will meet OU for the conference title.

It wouldn’t be a conference title game without Texas and Oklahoma. This time,  the Horns follow up a regular season win with a win at Jerry World.

Ehlinger is getting plenty of Heisman buzz nationwide and he puts on a show in his final game in his home state. Three touchdowns with his arm and another with his legs.

The defenses struggles, but what do you expect? It’s the Big 12, after all. Chris Ash’s crews bends but doesn’t break in crunch time.

The Horns make it to the College Football Playoff for the first time with a thrilling 42-38 win.

The  older scribes among us dust off storylines from that Rose Bowl meeting in 2010, when the Crimson Tide knocked Colt McCoy from the game early and ran away for a 37-21 BCS title win over the Longhorns.

Nick Saban’s Tide are forced to travel west after ACC champ Clemson ran the table for the top seed and a Sugar Bowl matchup with Georgia.

Bama quarterback Mac Jones doesn’t have Ehlinger’s credentials, but his receivers are electric. It’s a real classic and the No. 3-seeded Horns leave the West Coast as an elevated program but also as the second best team in Pasadena. Bama is back in the title game with a 34-31 win. The Tide then fall to Clemson in the title game.

The Horns finish 10-2 but show that they are, in Ehlinger’s words, “Back.”

Craven’s Corner: Predicting the champions of the SEC, Big 12 and ACC; Week 1 of college football