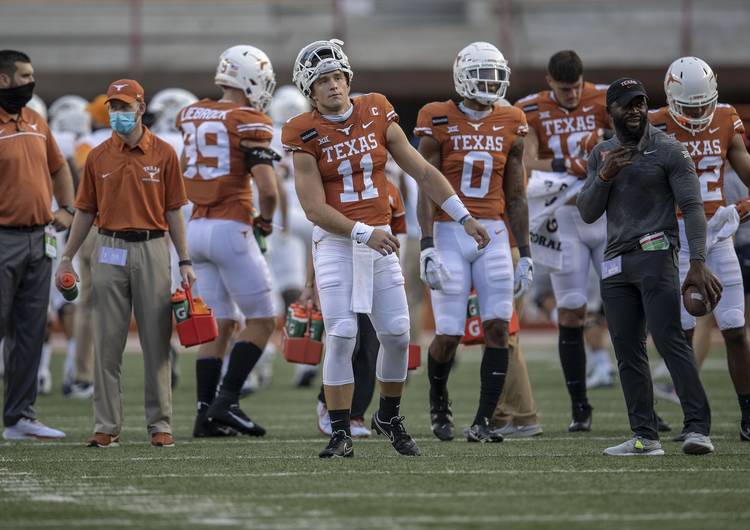 Texas Longhorns quarterback Sam Ehlinger (11) warms up before competing against UTEP Miners during an NCAA football game in Austin, Texas [RICARDO B. BRAZZIELL/AMERICAN-STATESMAN]

You have read it here before, but the Big 12 is always at its best when its two biggest dogs are barking the loudest.

Texas and Oklahoma will meet twice this season, once on Oct. 10 at a Cotton Bowl minus the State Fair and then again in the conference title game at Jerry World in December. Nothing that occurred on opening Saturday has changed that prediction.

As expected, the fifth-ranked Sooners destroyed FCS school Missouri State 48-0 behind freshman quarterback Spencer Rattler. Then the 14th-ranked Horns followed with their most impressive opener in years.

We knew coming in that the Big 12 would be top-heavy, but Iowa State’s 31-14 no-show loss to Louisiana at the start of the day made the top even heavier than expected. Conference games have yet to start, but the Cyclones looked nothing like the dark-horse contender many believed them to be.

It got even worse for the league after Kansas State, fresh off an eight-win season, gave up the ghost late in a 35-31 home loss to Arkansas State. It’s bad enough that two league members lost at home in games they were favored to win by at least a touchdown, but the fact that they came against teams from the Sun Belt, which came in  6-70 against the Big 12 all-time, made for an even more sobering afternoon.

As for the rest of the league, it could have used a bit of backup from Baylor and TCU, but the longtime rivals pushed their openers back for Rona-related  reasons.

The other two Big 12 teams on the docket — Texas Tech and Kansas — did nothing to change preseason perceptions of their being in the bottom half of the standings. The Red Raiders, who host Texas after the bye week, escaped with a 35-33 win over Houston Baptist despite giving up 567 passing yards to a kid named Zappe. And the Jayhawks lost their most winnable game on the schedule, 38-23, to Coastal Carolina.

Those early conference results were not lost on Texas coach Tom Herman, who had an eyeball or two on the screen during the day while his team prepped for its evening meeting with the Miners. Herman said having the late game may have helped the Horns, who walked into the stadium as a six-touchdown favorite and walked out on the right side of a 56-point spread.

“The good thing is (we had) an opportunity to learn from some other peoples’ mistakes,” Herman said. “I think it was a good eye-opener. I’m not saying that the outcome would have been any different had we kicked off first before those games, but having an opportunity  to see the outcomes of those games prior to us playing I think was definitely a shot in the arm to our guys.”

Texas looked every bit the part of a Big 12 title contender in all the major areas. With new offensive coordinator Mike Yurcich pulling the play-calling strings, Ehlinger pulled a Dan Marino on the Miners’ secondary with 429 yards and five touchdowns in just one half, including a 78-yard connection to Josh Moore on the first play of the season.

“That’s what our offense is designed to do,” said tackle Samuel Cosmi. “Start fast, and that’s what the first play showed. We’re going to be a high-tempo offense.”

Veterans Cade Brewer and Brennan Eagles caught touchdowns while newcomers Bijan Robinson, Tarik Black and Brenden Schooler also got some paint on their pants, adding to the vault of talent on what will be the first Longhorns team to compete in the College Football Playoff. That’s my story and I’m sticking to it.

New defensive coordinator Chris Ash could not have asked for a better start to his UT tenure after spending four seasons in the Rutgers wilderness. The Horns gave up only 3.2 yards per play, flew to the ball, made heady plays in the secondary — Josh Thompson played like a young Michael Griffin —  and, most important,  held the Miners to 3.2 yards per play and zero touchdowns.

It wasn’t a great day for the league but the potential great teams had impressive showings. Texas and Oklahoma held up their end and one of them will be holding up a Big 12 championship trophy come December.

Bohls: Texas surges into Top 10 on my AP ballot