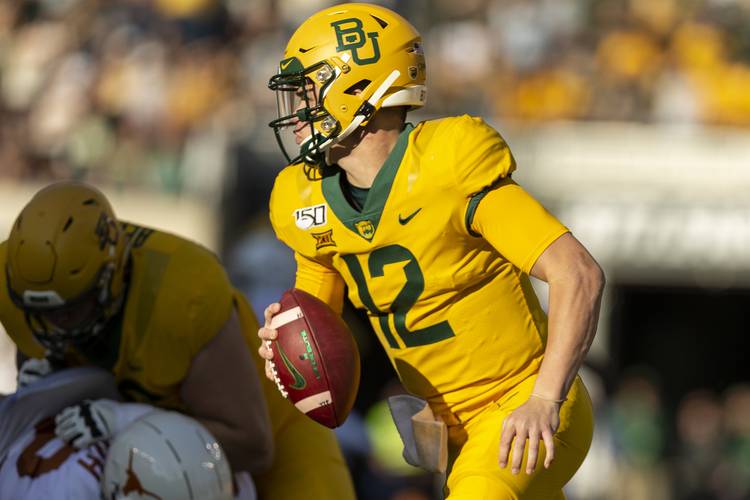 Baylor quarterback Charlie Brewer (12) looks for a receiver against Texas in the first half of an NCAA college football game on Saturday, Nov. 23, 2019, in Waco, Texas. [Stephen Spillman for Statesman]

This week we’ll focus on a pair of college games and three specific NFL matchups. Only 12 of the top 25 college teams are in action this week as most programs take a bye in preparation of their conference schedules.

Miami +2.5 over Louisville: Two teams ranked inside the top 20 will square off for the first time with ESPN’s “College Gameday” in attendance. This game is exciting because of the quarterback matchup. D’Eriq King transferred to Miami from Houston and looked good in his first game against UAB. Louisville has Micale Cunningham, who started his redshirt junior season with 343 yards and three touchdowns against Western Kentucky. I expect a close game, so I’m picking the underdog.

Baylor -4.5 over Houston: Both were supposed to start their seasons last week before opponents canceled over COVID-19 issues. The two schools worked quickly to set up this contest, which will take place at 11 a.m. in Waco. I’ll take quarterback Charlie Brewer and a strong defense at home over a Houston team that was inconsistent in Dana Holgorsen’s first year. Houston was 4-8 in 2019, the worst record for the Cougars since 2012. The four wins were the fewest by a first year head coach at UH in 20 years.

Bengals +6 over Browns: Do you trust the Browns and quarterback Baker Mayfield to beat any team by more than six points? I don’t. Rookie quarterback Joe Burrow looked good in his NFL debut, when the Bengals lost by three to the Chargers. The Browns were swamped by the Ravens but should win this game, though confidence levels in Cleveland are on life support entering Week 2.

Seahawks -4 over Patriots: Cam Newton impressed as the new quarterback of the Patriots, but a 10-point victory over the Dolphins doesn’t move the needle for me. The Seahawks looked like Super Bowl contenders in a 13-point victory over the Falcons in Atlanta. Russell Wilson will out-duel Newton by a touchdown.

Vikings +3 over Colts: Both teams lost in Week 1 despite the Vikings entering the season with strong odds to win the NFC North and the Colts being the co-favorites in the AFC South alongside the Titans. The Vikings were 0-2 against Aaron Rodgers and the Packers in 2019, so I won’t lose faith in Minnesota because of a Week 1 loss to Green Bay. Expect Kirk Cousins and the Vikings to rebound against an overrated Colts squad.

Bohls: Texas surges into Top 10 on my AP ballot