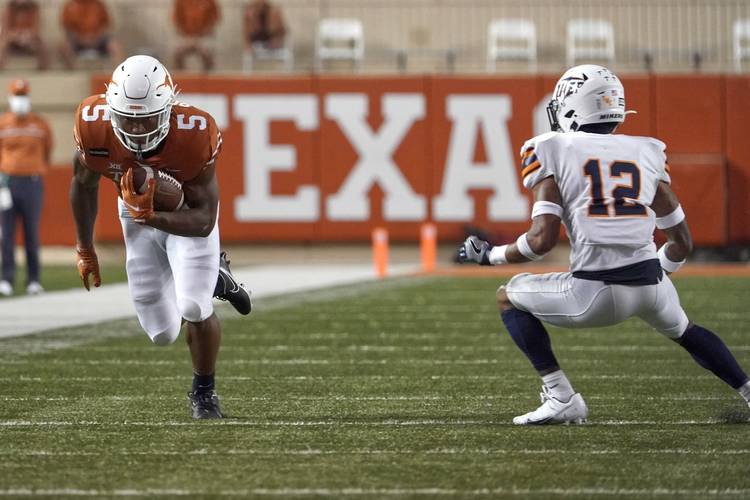 It may not exactly be majority rule, however, because Tom Herman casts the only real deciding vote on who carries the ball.

And while it was sophomore, converted quarterback Roschon Johnson who got the starting nod in the romp over UTEP, it could just as easily be junior Keaontay Ingram — who had four 100-yard performances to Johnson’s two last year — and perhaps, but probably not, freshman Bijan Robinson in Saturday’s Big 12 opener against Texas Tech.

But to hear the Texas head coach tell it, he has no bona fide starting tailback. He’s got three.

And that’s a good thing.

For their overall health, especially if one goes down. For their morale, because everyone has opportunity. For fresh legs, certainly an asset in the fourth quarter.

“I think an even distribution is what we’re after,” Herman said Monday. “Especially in 2020, you’re gonna want to make sure those guys stay fresh and healthy.”

None of the three had more carries than Ingram’s nine against UTEP. All are very skilled backs and capable receivers. Ingram’s solid. Robinson has unusual maturity to be able to play as a rookie. Johnson is probably the fastest of the three, and Robinson the most complete package.

Herman said Johnson did nothing extraordinary in preseason camp to earn the start, but Ingram had missed a couple of practices that set him back.

“But I don’t know how more emphatic I can be,” Herman said. “I know you guys always want to judge who’s on the first line and the two-deep and who jogs out with the 1’s, but to us, and more importantly to those young men, it’s irrelevant.”

It says here the Longhorns don’t need to have one top dog carrying the rock if all three can accomplish the same goals to make Texas one of the most balanced offenses in college football. No one would say a team must have a D’Onta Foreman to have a championship season. Sure, it’d be terrific to have a back top 2,000 yards this season, but it didn’t prevent a loss to Kansas that sealed the exit of Charlie Strong and didn’t ensure a winning season for the Longhorns (5-7) in 2016.

So Herman has it right.

Team rushing is much more important than having one bellcow to carry the load. In Herman’s 15 losses in his first three years, the Longhorns never had a 100-yard back, totaled 126 yards or fewer on the ground in 10 of those and never topped 191 yards as a team.

It’d be nice to have a D’Onta Foreman or an Earl Campbell, but those don’t grow on trees and aren’t essential to winning.

Until one such star emerges, Herman will wisely feed the hot hand.