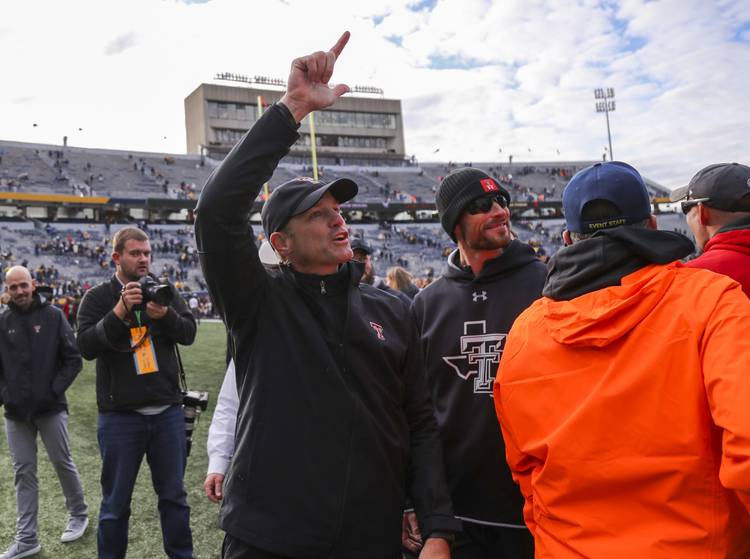 “I know I’ll ultimately be evaluated by the left-hand side of the ledger,” Texas Tech coach Matt Wells said. “It takes time. How long remains to be seen, but we won’t allow the logo to be diminished in any way.” (Ben Queen/USA Today)

But he doesn’t forget, either.

Not all of the Texas Tech coach’s memories are fond from his days growing up in Sallisaw, Okla., which was also the fictional home of the Joad family in “The Grapes of Wrath,” sharecroppers who were forced from their farms.

Wells did enjoy a terrific career as the quarterback for the high school football team and he’d grown up on Sooners football, attending Oklahoma games in Norman with his father and brother Luke. But come recruiting, he was also feeling some wrath because OU never came through with the offer he expected. Why?

“You’d have to ask Gary Gibbs that,” Wells said of the defensive-minded former Sooners head coach for six mostly unremarkable seasons. “I wasn’t offered by Oklahoma the last week of recruiting. That’s the truth.”

Another school did give Wells the time of day, but unfortunately for him, John Mackovic was fired that same year at Texas, which had been looking hard at him. So that didn’t pan out either.

Wells just wanted a chance to prove himself. As for following in his father’s footsteps as a dentist, that’d have been like, well, pulling teeth. Not for him.

Utah State head coach Charlie Weatherbie did want him as did his offensive coordinator and former Seattle Seahawks quarterback Jim Zorn, and Wells jumped at the offer. Logan, Utah was a place that grew on him and eventually Utah State named him head coach and the leader of a program where he was part of two 10-win seasons and five bowl games in six years.

Now he’s got to chance to avenge those long-ago oversights as the second-year head coach of the Red Raiders, who host No. 8-ranked, heavily favored Texas on Saturday.

Luckily, for the rebuilding Red Raiders, Wells does a much better job recruiting than being recruited himself. And he’s really good at it, something that wasn’t all that dear to the heart of former Tech coach Kliff Kingsbury, who landed with the Arizona Cardinals where he gets to coach a quarterback in Kyler Murray he couldn’t successfully recruit in college.

Like Wells, Kingsbury was a talented quarterback who put up big numbers for his alma mater, somewhat like Wells, who cut his coaching teeth at places like Navy and Louisville. He also served as recruiting coordinator at Tulsa and New Mexico.

Tech’s praying Wells has much more success than Kingsbury, who took the Red Raiders to three bowls in six seasons but pretty much squandered the gifts of quarterback Pat Mahomes and never had a respectable defense.

The jury is out on whether the 47-year-old Wells will fare better on the High Plains, but the bet is he will since he’s preaching balanced offense, aggressive defense and has cultivated the state with his down-home, personal style.

Asked if he’s been Texas-ized yet, Wells said, “Listen, I grew up in a small town in Oklahoma, and ain’t, y’all and fixing to were absolutely a part of my vocabulary.”

OK, he’s good. Hand the man a Shiner to go with an enchiladas plate.

That type of immersion into all things West Texas should pay dividends. He has so been ingrained into Texas high school football and a quick study that when he made his initial hellos to Red Raiders players, he’d respond immediately with their high school mascots, whether it was the Galena Park North Shore Mustangs or the Frisco Fightin’ Raccoons.

Wells has an inclusive philosophy borne out of his “we, us, our” mantra and makes it clear he’s looking for football junkies. They weren’t that far off from a bowl game last year, the final 4-8 record notwithstanding.

On the heels of a losing season that but for some awful late-game misfortune could have well been reversed to 8-4, Wells scoured the landscape and brought in 40 newcomers to a program that has had four consecutive losing seasons and five in the last six years.

Among those were eight grad transfers, giving Tech a total of 12 in Wells’ short time in Lubbock. Eight of those 12 have arrived from other Power Five programs, including Arizona linebacker Colin Schooler and LSU safety Eric Monroe, and several have multiple years of eligibility left, an added attraction. Wells mined programs like Penn State, Michigan State, Alabama, Duke and Wofford for transfers.

“We took one or two every year out of Utah State, but you need to be spot-on with what you’re looking for,” he said, hoping to duplicate Tech’s basketball success. “Chris Beard has had tremendous success with them. He had two out of his five starters, so that’s 40% of his Final Four team. He had two starters last year and two or three this year.”

That plan won’t change because Tech often has to go out-of-state for talent like it did with seven states represented in the 2020 class that ranked 47th nationally and just seventh in the Big 12.

“We needed to get old,” Wells during a taping of our “On Second Thought” podcast this week. “I needed an older team to compete in this league. It’s not an end-all, be-all, but it’s part of the solution.”

Had the Red Raiders been a little luckier — and healthier — down the stretch in 2019, they might have avoided four close losses by three points or less. But playing without injured quarterback Alan Bowman, they fell on two last-minute field goals and dropped a controversial game with Baylor when an obvious Bears fumble in overtime was not reversed by replay.

Any one of those games could have offered an opportunity for instant momentum and a boost to Wells’ culture and might have altered a later game with Kansas that Tech lost.

“That,” Wells said, “is the understatement of the year. I’d rather fake it till we make it, but in some ways, we didn’t earn that luck.”

A reversal or two could have dramatically changed that 1-6 finish, but he notes a different record wouldn’t necessarily ensure his culture had been established. That timeline usually takes longer.

“It would have jump-started our program in the eyes of many,” he said. “I know I’ll ultimately be evaluated by the left-hand side of the ledger. It takes time. How long remains to be seen, but we won’t allow the logo to be diminished in any way.”

Tech is not without talent. Wells has probably the second or third-best NFL offensive line prospect in the Big 12 behind Texas’ Samuel Cosmi and OU’s Creed Humphrey in junior guard Jack Anderson, plus some really fast wide receivers like 6-6 T.J. Vasher and 6-3 Erik Ezukanma and a more balanced offense than is usual in Lubbock.

Bowman is a highly regarded quarterback out of Grapevine, where he started for four years but drew offers from only Houston, Ole Miss, Illinois and Tech. He could well be another in a long line of great Red Raiders quarterbacks like Mahomes and Baker Mayfield, but has had troubles staying healthy with only 11 starts. A punctured lung (twice) and a broken collarbone in the third game of 2019 ended his season prematurely but saved it as a redshirt year.

He threw for 430 yards and a pair of touchdowns in Tech’s deflating 35-33 escape against FCS fledgling Houston Baptist, and Wells announced that running back SaRodorick Thompson will play against the Longhorns after off-the-field legal problems.

The Red Raiders aren’t a full-fledged member of the Air Raid club but do incorporate some of its principles in their ultra-fast, up-tempo attack. No longer are tight ends on the endangered species list in Lubbock.

Tech is a huge 18-point underdog to Texas and hasn’t won a bowl game since the 2013 Holiday Bowl, but Wells said his team’s goal is “get to November and compete for a championship. We don’t really talk about bowl games much.”

If he keeps recruiting like he has, especially with transfers, maybe it won’t be all talk.