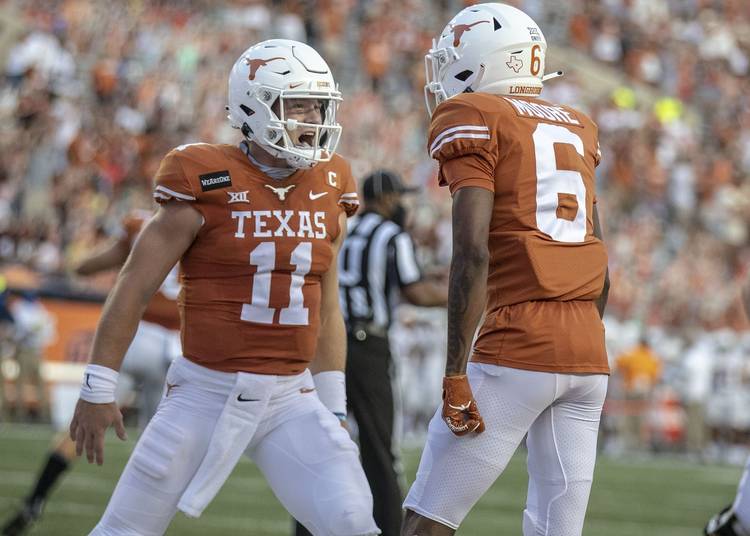 Texas has played only one game this season, but it’s safe to make this bold call now. We’re going to miss Sam Ehlinger and Mike Yurcich’s chemistry when this is over.

Come bowl season and beyond, Texas fans will talk about how the senior quarterback took his game to another level working with the first-year offensive coordinator.

It’s quite striking how Ehlinger and Yurcich have hit it off. They speak about each other in professional tones, and frankly, why shouldn’t they? Ehlinger has played 37 career games and thrown for more than 9,200 yards with 73 touchdowns. Yurcich has been around elite talent before. He guided Oklahoma State’s Mason Rudolph and Ohio State’s Justin Fields.

“I would say our relationship is extremely professional,” Ehlinger said. “He has done a great job of coming in and implementing a powerful, fast tempo offense that’s extremely lethal. But at the same time, he’s done a great job of not only coaching the offense but coaching me and having me prepared to the best of his ability, and I really appreciate him for that.”

Yurcich noted that every quarterback he’s ever coached has been unique. “And how you handle them is the same with regard to being honest and making sure that the lines of communication are open and that you communicate how you’re feeling,” Yurcich said.

“And sometimes, that’s good, bad and ugly,” he added. “But that transparency has to be there. And it’s a two-way street. He’s very good at communicating, and he’s a very honest football player.”

Think about all the offensive coordinator churn that’s gone on in Moncrief in recent years. Shawn Watson got mushy at times trying to make the best of it with a future NFL tight end. Jay Norvell just wanted to impress future employers. Sterlin Gilbert had months to install a run-and-shoot, Baylor-style system before he was gone with head coach Charlie Strong.

Tim Beck came in with coach Tom Herman, but it was clear this was always Herman’s offense. At least, that’s how it was packaged and sold. Yurcich brought new wrinkles, like a true up-tempo style. It’s still Herman’s offense, though.

The best part? The Texas president didn’t have to fly anywhere to convince Yurcich to take the job. Hooray, progress! The imagination runs wild thinking how bad Herman would dog-cuss that situation were he in Strong’s shoes. Eh, maybe Jay Hartzell would fly to Tulsa, too, mask and all. Athletic director Chris Del Conte would be mortified, though. He’d grow back that COVID beard for a disguise.

This doesn’t work if the quarterback and offensive coordinator don’t work. The quarterback must be able to execute on the field, come to the sideline and tell the coordinator on the headset what he saw and why he did what he did. It has to be clear and concise.

“He has trust in me that I have a good amount of experience under my belt, and I feel comfortable with what will be successful,” Ehlinger said. “And then obviously, I trust him with everything that he’s calling as well.”

The coordinator then must be able to process the information and suggest possible changes or plays.

“At quarterback, especially, you have to be honest,” Yurcich said. “You have to own everything that you do. You have to own every mistake. When you’re giving me feedback in between plays, in between series, what were you thinking? I need to know what you were thinking. I’m not here to judge it. I’m here to correct it, and get you pointed in the right direction.”

One of the smartest things Yurcich does is something Beck did the last few seasons. In practice, Ehlinger would look over the play sheet and tell coaches what plays he liked and what he didn’t, either because he wasn’t comfortable with it or thought it may not work. Yurcich is doing the same thing. “If I don’t feel comfortable with the play, he won’t call it,” Ehlinger said.

This is how you build trust between the quarterback and play-caller.

Watching NFL games the last two weeks, something struck me while watching certain former Longhorns. The ones who are excelling are the ones who spent extraordinary time working on their craft. Quandre Diggs eat, sleeps and breathes football. Charles Omenihu was eager to tell you about the subtle differences he noticed on film. Malcolm Roach grew up a coach’s son, so he’s been around football all his life. It takes a special mindset to go from undrafted free agent to a rookie contributor for the New Orleans Saints.

Ehlinger is cut from the same cloth in that regard. The Westlake product threw for 426 yards and five touchdowns in the 59-3 win over UTEP and said afterward, “To tell you the truth, I’m actually pretty disappointed.”

“I felt like I was kind of aiming the ball a little bit, wasn’t letting it rip like I know I can,” Ehlinger said. “I missed a few throws. Obviously I’m striving for the perfect game, and it’s always going to be that way. (Will) I ever achieve that, I don’t know. But I’m trying to be as good as possible. And in order to do that, that takes correcting every single mistake and critiquing every play.”

And here we are. Texas finally has a savvy, veteran quarterback with Heisman Trophy and NFL aspirations being fine-tuned by an offensive coordinator who knows how to work with Ferraris.

“My job is a little bit of get out of the way,” Yurcich said.

It could be one of the easiest jobs he ever has.