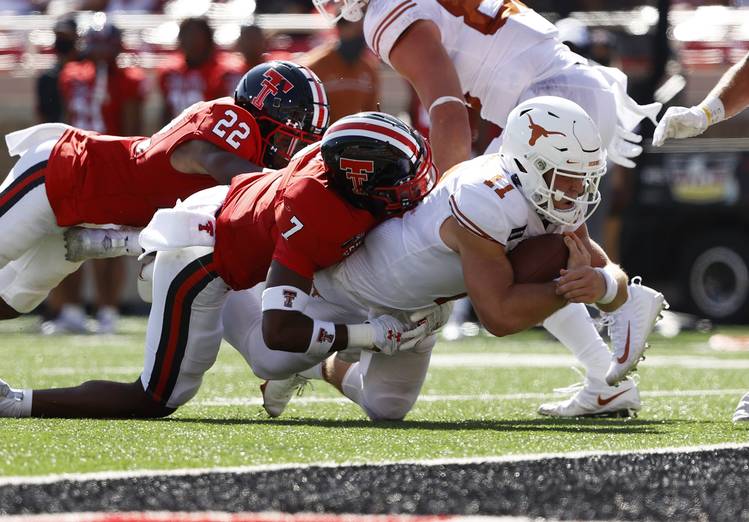 And an extraordinary performance by Sam Ehlinger, who willed Texas to a stunning win and helped the Longhorns (2-0, 1-0 Big 12) pull  off one of the most amazing comebacks in school history on Saturday.

The unthinkable nearly happened on a picture-perfect afternoon, but eighth-ranked Texas dodged a crippling setback and, despite trailing 56-41 with 3:13 to play, pulled out a 63-56 overtime victory over upset-minded Texas Tech.

And so what looked to be setting up as the perfect opportunity for Texas in a lackluster conference where Oklahoma was knocked off at home and the rest of the league sleep-walked through its early non-conference schedule may remain exactly that.

One game in, and Texas sits at 1-0 in league play. That’s all that matters, that and the fact it has Ehlinger, who threw two touchdown passes in the final two minutes of the game.

Clearly not all would have been lost, except of course its place atop the Big 12 standings, a spot in the Top 10, and the early momentum gained by a 59-3 thumping of punching bag UTEP two weeks ago. But Ehlinger came to the rescue, throwing five touchdowns for the second straight game, including the 12-yard game-winner to Joshua Moore in overtime on a slant route.

This was just a critical contest for Texas, which now hosts a wounded and angry TCU after it dropped its opener and then faces dangerous but also flawed Oklahoma in the Cotton Bowl.

With a 10-game schedule, a team faces less margin of error, but Texas might would have had  to run the table to reach the Big 12 title game and try to win the conference for the first time since 2009.

The Longhorns dominated much of the early play and led by 10 points on four different occasions. None of those advantages held up until the last lead did in the extra period.

Blame the kicking game mostly for the sloppy play and near upset.

And Texas special teams taketh away.

Unfortunately for the Longhorns, they giveth more than they taketh at Jones AT&T Stadium, where the undersized crowd of 16,000 didn’t even bother throwing many tortillas late in the game.

In no particular order but a lot of disorder, Texas fumbled away a punt for an easy Texas Tech touchdown, allowed the Red Raiders to easily recover a surprise onside kick early in the second quarter, had a punt blocked and had another punt shanked.

And to think, Tom Herman pried special-teams guru Jay Boulware out of Oklahoma to fix that part of his football team.

Trust me. Nothing’s been fixed.

The deluge of disasters in Texas’ kicking game spelled doom.

Quite frankly, the Longhorns just looked poorly coached in that phase. And they more than had their share of mistakes in the tackling department as well, one game after new defensive coordinator Chris Ash praised his unit for fewer than 10 missed tackles in the season opener.

The first half was a compilation of wild plays, alternating momentum and what might have beens for Texas. Still, the Longhorns went into the locker room with a 31-21 advantage despite all manner of miscues in their special teams.

Those were an unmitigated disaster as Texas’ Ryan Bujcevski had a punt blocked and shanked another one for 17 yards under heavy duress, and the Longhorns allowed Tech to pull off an unchallenged, surprise onside kick. Only sterling defensive plays with interceptions by Chris Adimora and Chris Brown prevented a big deficit as they picked off Alan Bowman just two plays after the blocked punt and one after the onside kick.

So much for a strong showing coming off a bye against a team that barely — and we do mean barely — got past a fledgling FCS program in Houston Baptist by two points.

You can’t have ebb without the flow, and it flowed for much of the day in the wrong direction for the Longhorns because of a sea of mistakes.

Texas did run the ball much better. And Ehlinger did his usual thing with five more touchdowns, giving him 10 on the year, but the reliable senior suffered a rare lapse and his first interception of the season on a rollout pass to Brendan Schooler.

The game appeared to turn in a pivotal third quarter when the prolific Red Raiders offense produced three touchdowns and nearly a fourth, but for a missed 46-yard field goal. Texas had just 13 snaps that period after dominating play in the opening half and almost doubling the time of possession.

It was such a mixed bag for Chris Ash’s defense, which often reverted to form with its bad tackling issues but also had a pair of key interceptions and five series in which Tech went three-and-out. None of that mattered in the end.