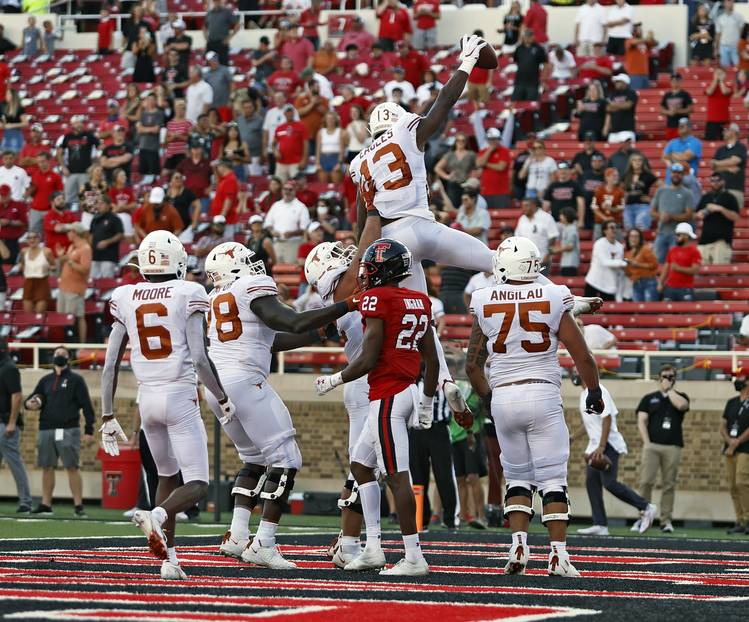 Texas' Brennan Eagles (13) celebrates after catching the ball for a two-point conversion to tie the game during the second half an NCAA college football game against Texas Tech, Saturday, Sept. 26, 2020, in Lubbock, Texas. (Brad Tollefson/Lubbock Avalanche-Journal via AP)

This week’s directions from the main office about filling out our Associated Press Top 25 college football ballot came with new liberties.

Ultimately, I chose to omit the Big Ten and Pac-12 and other leagues from consideration because they won’t be playing for quite some time, assuming they don’t change their minds and pull a double reverse and shut down again. I thought hard about considering them but finally believed including them would unfairly penalize those teams that are taking big risks and playing games now. Sorry, Ohio State, my preseason No. 1.

One of the weekly instructions is also to never be afraid to make drastic changes with your vote from week to week. That’s a directive I take very seriously, much to the chagrin of some. I try to keep as open a mind on this as possible.

That will explain — perhaps not adequately to some — why my new Top Ten includes a newcomer in Mississippi State. Of course, I already gave the Bulldogs some serious props Saturday since I picked them to upset the defending national champion LSU Tigers in Baton Rouge, of all places.

I’ve long admired Mike Leach’s ability to put up big points on practically everybody, and the fact he had a veteran quarterback transfer in K.J. Costello from Stanford, a stud running back and a strong defense returning gave me hope they might knock off depleted LSU.

That’s why MSU comes in at No. 10 on my ballot. If anything, that’s maybe too low, but I’m not sure LSU is in store for a great season.

In addition, I stuck once-beaten Kansas State at No. 11, just ahead of vanquished Oklahoma, since we now know the Wildcats are better than the Sooners. They proved that by beating them in Norman.

I bumped surging Miami all the way up to No. 5 after dismantling wilting Florida State. Manny Diaz clearly has it going with the help of terrific quarterback D’Eriq King.

I kept Texas at No. 7 after its miraculous comeback win in overtime against Texas Tech.

Other newcomers after wins in their openers are Virginia Tech at No. 18 and Virginia at No. 25.

I dropped Texas A&M to No. 23 and had some misgivings about even including the Aggies after their highly disappointing narrow win over unheralded Vanderbilt.