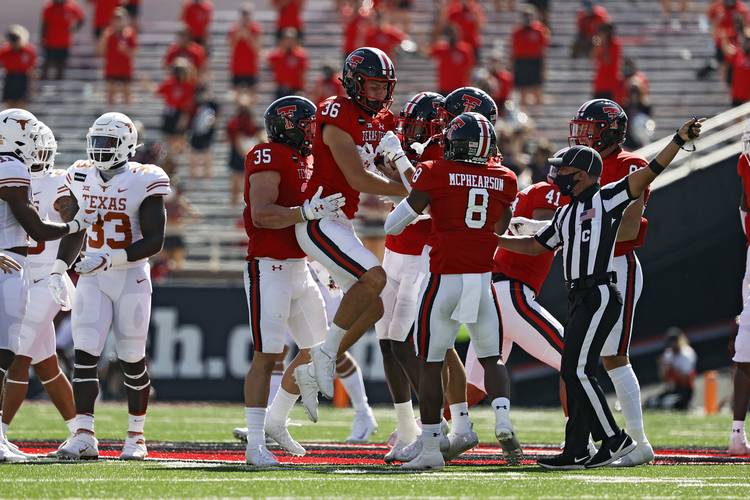 Texas Tech's Trey Wolff (36) celebrates after recovering an onside kick during the first half of an NCAA college football game against Texas, Saturday, Sept. 26, 2020, in Lubbock, Texas. (Brad Tollefson/Lubbock Avalanche-Journal via AP)

Tom Herman made a really splashy hire in the offseason.

Well, actually he made a ton of highly visible hires since the Alamo Bowl, firing nearly everyone but the equipment manager after a highly disappointing 7-5 regular season.

He hired new coordinators on both sides of the ball, but one of the biggest moves was luring Jay Boulware away from Oklahoma back to his alma mater.

By most every account, this was a real coup because Boulware has been a special teams star everywhere he’s coached, from Auburn to Utah to Iowa State. In his seven seasons in Norman, the Sooners scored 10 touchdowns and ran back three two-point tries and always had a strong kicking game.

I’m sure my memory isn’t what it once was, but I’m hard-pressed to remember a worse showing by Texas special teams than what we witnessed in Lubbock last Saturday. It was such a disaster, I was stunned no FEMA officials showed up to lend assistance.

I’m an unapologetic Boulware fan since his days as a popular UT player, but his units were historically horrible against Texas Tech.

We can properly assume it will get much better moving forward with a game against TCU on Saturday since, quite frankly, can it possibly get worse?

Consider the breakdowns at Jones AT&T Stadium, if you dare:

A muffed punt by D’Shawn Jamison that went for a Red Raiders touchdown.

A blocked Ryan Bujcevski punt that set up the Red Raiders at the Texas 17, though they were denied by a Chris Adimora interception.

A stunning, onside kick recovery by Texas Tech early in the second quarter that was negated by a key interception by Chris Brown.

A shanked, 17-yard punt that set up Tech at midfield and started a Red Raiders touchdown drive.

Otherwise, the special teams were flawless.

We kid, but to be fair, Texas had its own share of sterling play when it successfully executed a textbook onside kick recovery that — unlike the sad ending to last year’s LSU loss — sparked the comeback.

Cameron Dicker started that terrific play and also was true on both field-goal attempts and effective on kickoffs.

But it was a decidedly mixed bag.

Special teams, in fact, may be the big uncertainty in 2020 after coaches missed out on spring drills, were reluctant to conduct all-out scrimmages in August and hard-pressed to simulate full-speed actions.

“We’ve spent a lot more time on it. We weren’t very successful in Week 1,” said Iowa State’s Matt Campbell, whose Cyclones surrendered kickoff and punt return touchdowns in a season-opening loss to Louisiana. “Special teams are a great unknown for us. But we always put our best players out there. We’re in a situation where every play matters.”

Oklahoma’s Lincoln Riley feels similarly, even as a coach of a perennial powerhouse.

“We actually went a little more on special teams because we had changes on our staff,” said Riley, who had to replace Boulware. “That was one of the biggest things we had concerns about. We play a lot of starters, but we try to keep them on no more than two special teams.”

They always play a huge role.

Baylor’s Tristen Ebner became the first Bears player in the last 25 years to have two kick returns for touchdowns from 100 and 83 yard in a win over Kansas. Kansas State blocked a punt to give it a short field and an eventual touchdown and got a 50-yard, game-winning field goal from Blake Lynch in a huge 38-35 upset of Oklahoma.

The loss to Texas despite a 15-point lead with 3:13 to play will stick with Matt Wells for a time.

“That’s pretty painful,” the second-year Texas Tech head coach said. “My first game as an assistant coach at Utah State, we were up 12 against Auburn, which was the defending national champion, with like 2:12 to go. It was a similar deal. They got a touchdown, an onside kick and another touchdown, and we got beat.”

Some coaches might not have enough time in the work week — or healthy bodies — to spend on special teams as much as they’d prefer. Wells said they work on situations like onside kicks every Thursday and Friday.

Most Big 12 coaches say they prefer to have every-down starters play a lot on special teams, but they have to ward against fatigue. Herman has 18 starters on special-teams units and even uses the the likes of Chris Brown, Joseph Ossai, Caden Sterns, Josh Thompson and Roschon Johnson on the punt team.

“Our punt team has kind of a star-studded cast,” Herman said. “Our kickoff coverage team, we’ve got a few (starters) there. I would like to have our offensive and defensive starters hopefully only start on one of the big four Special Forces units. And that’s a big change of mine and coach Boulware right now.”

He said they’ll push hard on young players like Jalen Ford, Jahdae Barron, and Kitan Crawford to contribute even more. It was Barron who scooped up the blocked punt for a 2-yard touchdown.

NCAA legislation freezing everyone’s eligibility frees Herman and others to play young players without costing them a year.

“We need those guys to start on three or four of them,” Herman said. “But we’ve got to feel confident that they can get the job done, too. So that’s our job as coaches to accelerate that learning and hopefully save some legs on some of our starters.”

And save some games as well.