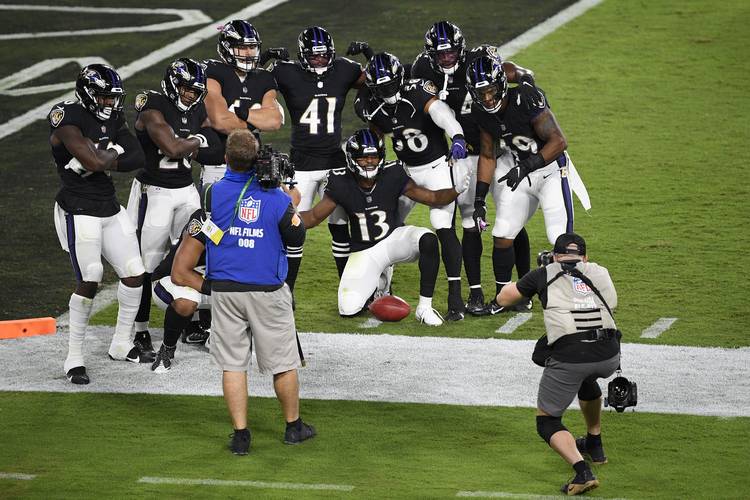 Baltimore Ravens wide receiver Devin Duvernay (13) and others poses after Duvernay ran back a kickoff for a touchdown during the first half of an NFL football game against the Kansas City Chiefs, Monday, Sept. 28, 2020, in Baltimore. (AP Photo/Nick Wass)

Watching Devin Duvernay streak across my TV screen Monday night, I had a sudden thought. Lots of Longhorns have been showing up in the weekly NFL highlights this season.

Everything in sports ebbs and flows, and during the 2010s, NFL general managers generally passed on Longhorns. They’re coming back around, though.

Malcolm Brown scored the first touchdown in Sofi Stadium history with the Rams. Malcom Brown had 34 tackles with the Saints after four productive years with the Patriots. Now he can tutor Malcolm Roach, an undrafted free agent who had four stops against the Raiders in Week 2.

Asked about Roach, his former UT teammate Keondre Coburn said, “Just to see him go to his hometown team and making plays after going undrafted proves the NFL scouts that they got it wrong for him.”

The Broncos have a slew of Longhorns — Andrew Beck, P.J. Locke and Calvin Anderson. And, of course, Pete Carroll unleashes Quandre Diggs, Poona Ford and Michael Dickson each week in Seattle.

Collin Johnson has two catches for 17 yards thus far in Jacksonville. Connor Williams is still blocking for Dak Prescott, and DeSean Elliott is still on patrol in Baltimore. The Eagles signed Hassan Ridgeway as a rotational player this season. Malik Jefferson is eager for another chance after being one of the last cuts with the Chargers.

So why can’t Texas win more Big 12 championships with all this supposed NFL-caliber talent? Well, that’s another story.

“On Sundays we always have the games on the TVs,” UT quarterback Sam Ehlinger said. “And we’re very, very proud and honored to be able to have the ability to play with them. And it’s awesome to see them making incredible plays like that. We just feel very fortunate to have played with him in the past.”

Does Ehlinger see himself playing on Sundays eventually?

“I’m focused on beating TCU this week,” he said, no doubt a pleasing answer to Texas coach Tom Herman.

Everyone associated with the program was mortified when Texas didn’t have a single player drafted in 2014. Prior to that embarrassing spring, the Horns had at least one player taken in the top four rounds for 13 straight years.

The draft results matched the on-field results. The 2013 team skewed younger, went 8-5 and coach Mack Brown was ousted afterward. The Horns went 6-7 in 2014, Charlie Strong’s first season, but five key contributors were drafted, including Jordan Hicks (third round) and Diggs (sixth round). Geoff Swaim was a seventh-round pick that year and now has 48 career receptions in six seasons, mostly with Dallas.

Then came some lean years. Ridgeway was the only player drafted in 2016. D’Onta Foreman, the Doak Walker Award winner, was the only Longhorn picked in 2017.

It felt like a breakthrough moment in 2018 when four players were picked. Williams was taken in the second round and became the first UT offensive lineman drafted in 10 years.

The NFL doesn’t care about traditions, recruiting rankings or hype. Can you play or not? They also don’t care about conference affiliation, as much as SEC fans would have you believe otherwise. What kind of teammate are you? Can you process information? Are you reliable? Can this team, after giving you millions of dollars, trust you?

“I haven’t had one scout or general manager tell me they’re drafting kids based on a patch on their jersey or anything like that,” Herman said in September 2019.

The Longhorns had three straight losing seasons under Strong from 2014-16, and thus, there weren’t many players drafted. That NFL drought hurt Herman’s ability to recruit some players because five-star standouts thought they “wouldn’t develop” at UT.

Duvernay was famously quiet. At the Alamo Bowl, Roach joked that “this dude don’t even talk and he’s one of my best friends.”

Asked mid-season what he’d do after football, Duvernay said, “Beyond football? I don’t know, I’ve got to think about it.”

Ravens coach John Harbaugh probably doesn’t have to think about it. He’ll keep giving Duvernay chances after the rookie’s sizzling 93-yard kickoff return for a touchdown against the Chiefs on Monday Night Football.

“He’s a hard worker,” Harbaugh told the Baltimore Sun in early September. “He doesn’t say a lot, but he works a lot.”

And that’s why the NFL is coming around on Texas players. Omenihu truly loves to study football, and it shows. Duvernay just keeps his head down and works. Roach is motivated to prove everybody wrong.

“Making plays is just something you love to see,” Coburn said of Roach. “I’m really, really proud of him.”

Sundays may have that burnt orange glow for years to come.

Bohls: Texas has a bad recent history to TCU — and rightly owns it after loss