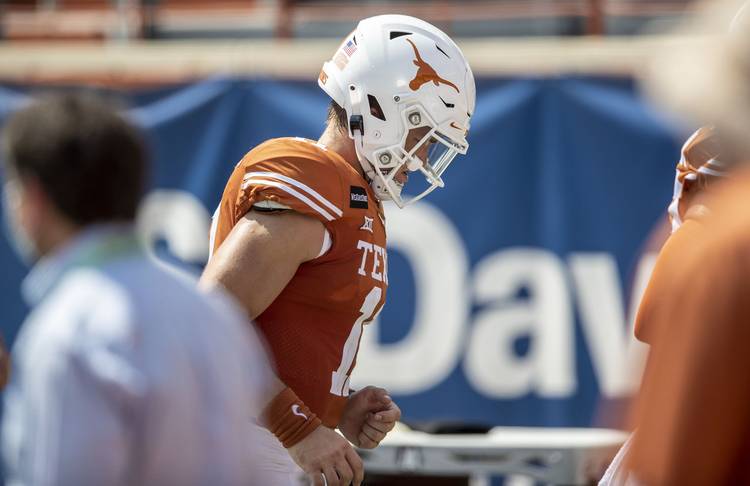 UT quarterback Sam Ehlinger (11) runs into the locker room at halftime of a game against TCU in Austin on Oct 3, 2020. (Ricardo B. Brazziell/American-Statesman)

Of all the conclusions drawn from yet another Texas loss to TCU, this could be the most disturbing.

Not only did the unranked Horned Frogs (1-1, 1-1 Big 12) win the scoreboard in Saturday’s chaotic 33-31 victory, but the ninth-ranked Longhorns lost to a superior team at home.

Max Duggan missed almost the entire preseason camp because of a heart condition and was the best quarterback on the field. TCU made the biggest plays, none bigger than forcing Keaotay Ingram’s fumble on the doorstep of the end zone near the end.

The Horned Frogs led for all but about six minutes of the game as Texas (2-1, 1-1) was in comeback mode the entire day.

And that’s not good when Tom Herman’s into his fourth season in Austin with a very unimpressive 27-16 record, he has the league’s most veteran quarterback who’s a Heisman candidate, and he was facing an 0-1 club that was picked to finish sixth in the Big 12.

As I said, not good. So this comes down to accountability.

The Longhorns should own it.

And Patterson owns Texas. I’m sure he’s got the official papers designating the same locked in his safe somewhere. No wonder he’s got a statue outside Amon Carter Stadium. He’s beaten Texas seven of 10 times, including Saturday when his team began the week as a 13-point underdog, and did so with a gifted, sophomore quarterback making just the 11th start of his career.

We should all recognize that Gary Patterson can roll out of bed, not even wolf down a protein bar and still coach the pants off whoever is the head coach at Texas, whether it’s Herman or Charlie Strong or Mack Brown.

Strong never beat him. Never even came close, losing all three times by the unseemly margin of 129-26. And for the life of me, I can’t remember how Texas scored the 26. Mack at least broke even with a 2-2 mark against him.

“They made more plays than we did,” said Herman, who gave credit to Patterson and took the blame. “Really sloppy game in all phases. We can’t continue to beat ourselves the way that we have these last two weeks and expect to win many more ball games. That’s on me to get them ready and find a way to make sure that we don’t beat ourselves.”

So, Longhorns, stop with the self-inflicted nonsense you were spouting following Saturday’s disappointing loss. It doesn’t become you. Even with flimsy offensive pass interference calls and a marginal targeting penalty, just say you weren’t good enough. The truth hurts. TCU had as many self-inflicted wounds as the Longhorns, getting penalized 14 times for 109 yards. That’s two more flags than Texas accumulated.

Granted, those were killer infractions Texas suffered. They negated a 95-yard kickoff return and erased pass plays of 47, 34 and 26 yards. Even the ones that weren’t called hurt. Like the non-holding call against TCU on the Frogs’ first touchdown drive.

But great teams overcome such things. And Texas, to this point, is not to be confused for a great team.

Not after barely surviving an overtime game against an average Texas Tech team that some might say it had no business winning. And not Saturday when Texas made a few big plays, but not enough little ones. As Herman called it, “We were feast or famine.”

Texas has been famished for a long time, enduring a drought of Big 12 championships that extends back to 2009. Sure, it could win it this year because nemesis Oklahoma — its opponent next week — already took a loss last week before its Saturday night game at Iowa State.

And now it’s got a razor-thin margin of error. So the Longhorns had better hone in on their identity and expand it beyond the strength of Sam Ehlinger’s arm.

“Everybody’s got to take ownership of their mistakes,” Ehlinger said, sending the right message. “Own it. Don’t point fingers. Own it.”

The fourth-year starter was productive with four more touchdown passes but also was unusually inaccurate with more incompletions (19) than connections (17) and a costly interception that led to a TCU field goal.

“He was up and down,” Herman said. “He had some really good throws and some ill-advised ones as well.”

TCU was much more consistent, holding the ball for almost 10 more minutes than Texas and scoring on seven of its 12 possessions if you don’t count the final bizarre series when Patterson’s bunch was milking the clock.

The Longhorns made some too, but not nearly enough. And not enough is becoming a recurring theme.

Golden: Texas gave away the chance for a Big 12 takeover with OU looming