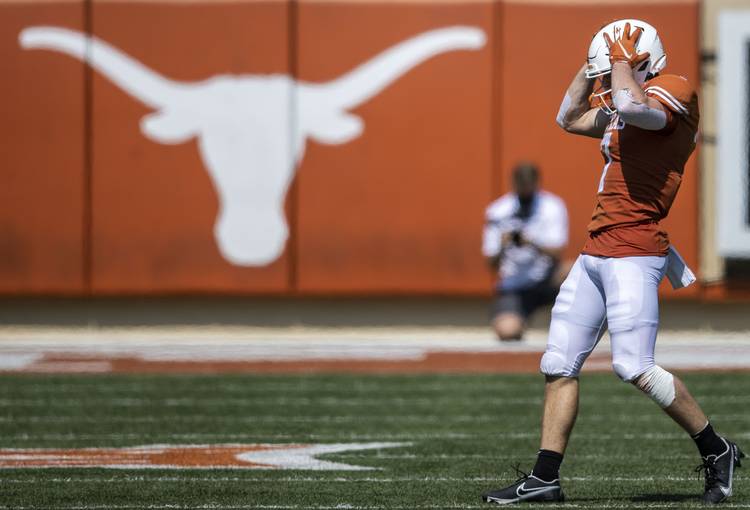 Texas gave it away on Saturday, and just like that, last week’s miracle on the South Plains has taken on lesser significance.

In tennis, it’s called solidifying the break. When you win a game on an opponent’s serve, you must then hold your own serve to make it mean something.

Texas did not. The Horns double-faulted away a win and ruined a great chance to stick their nose out front in the early part of Big 12 play.

The Horns (2-1, 1-1) could have entered their annual showdown with Oklahoma as an unbeaten, top-10 team on the rise. Instead, after Saturday’s 33-31 loss, will arrive in Dallas with bruised egos, an uncertain identity and questions regarding their inability to work teams that they’re supposed to work.

On a day where they never found their cruising speed due their own ineptness, the Horns still could have won, but just like the Red Raiders the week before, they figured out a way to lose while on victory’s doorstep.

It would be easy to blame Keaontay Ingram for blowing it after he carelessly reached the ball out toward the goal line at crunch time with a half-dozen set of hands swiping at it, but this one doesn’t all fall on the shoulders of the same running back who dropped what would have been an easy touchdown in last year’s crushing loss to LSU.

Ingram had plenty of help — from his teammates, from his coaches and yes, even from the officials, who missed more calls than I care to count on a bad day at the office.

Really, this was a game that TCU should have won. The Frogs played cleaner from start to finish and made more clutch plays than the Horns, who came in as a 12-point favorite. Quarterback Max Duggan out-clutched Sam Ehlinger for the second straight year and TCU coach Gary Patterson continued his mastery of Texas, running his record to 7-2 since the Frogs joined the Big 12.

The Little General saved his team’s early season after a tough home loss to Iowa State and threw the league into a predictable logjam.

As for Texas, Ehlinger wore the face of a crestfallen team leader who was searching for answers that didn’t readily come when he was asked to gauge the feeling in the locker room.

“I would say ‘disappointed,’” Ehlinger said. “The self-inflicted mistakes killed us. We can’t make that many mistakes and expect to win.”

Ehlinger said he consoled Ingram in the locker room and told him that “it’s just a game” and not life or death.

That’s true on the surface, but similar sentiments aren’t being echoed in Tuscaloosa, Clemson or Columbus, places that have won national titles in the 15 seasons since Texas last danced among the national elite.

Call it what it was: A real soul taker for a title-starved fanbase that was hoping to comfortably settle in to top-10 status. The two-week stay was nice, but that’s over for now.

An entire listing of the miscues that kept the Horns from a 3-0 start for the first time since 2012 could fill a notebook, but here’s a sampling:

And let’s not forget the offense coming up empty one possession later after Joseph Ossai and T’Vondre Sweat teamed up for a strip sack and fumble of Duggan at TCU’s 36. The drive was quashed after tight tackle Christian Jones was whistled for being illegally downfield, nullifying Al’Vonte Woodard’s 26-yard catch to the TCU 11. The Horns had to punt.

Thankfully there isn’t any wallow time because the reeling Sooners — who just started 0-2 in league play with a loss at Iowa State —  are next up on the schedule. Coach Tom Herman knows he must get his leadership council in the right frame of mind because any head hanging could trickle down to the youngsters, and now is no time for self-pity.

“I do know that the want-to, the desire, the intensity level will be there,” Herman said. “It’s more of a matter of us again, finding a way to take the practice reps to the field on the field on Saturday. That falls on me. That falls on our the coaches and it falls on leadership of this team to make sure that we get that done.”

They had it in their grasp and it slipped it away.

We’ve heard that one before.

Bohls: Texas has a bad recent history to TCU — and rightly owns it after loss