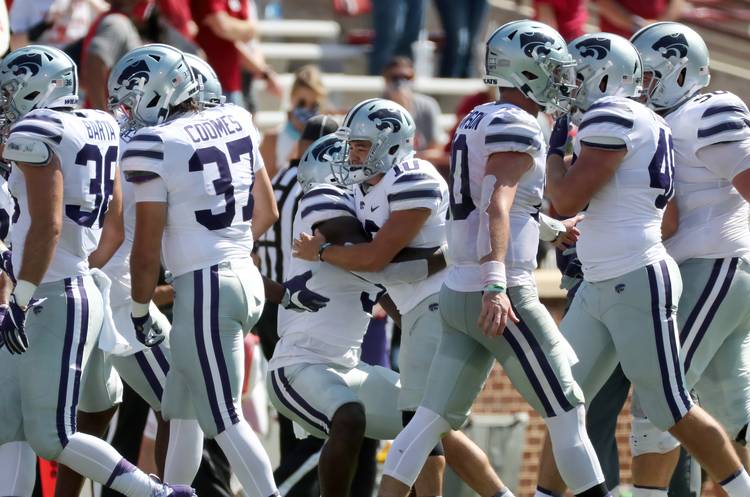 The regular season for the Big 12 is supposed to end in Arlington with the conference championship on Dec. 12.

But if you listen to some, the season’s already ended.

It was over once Oklahoma fell in Ames, Iowa, last Saturday night for its second Big 12 loss of the season.

It ended with Texas getting upset by 13-point underdog TCU and barely clinging to a Top 25 spot.

It might be true, but Big 12 coaches aren’t buying it. Still, the sound you hear is the air coming from the balloon that is this week’s Texas-OU game.

“If we’re trying to predict what’s going to happen after three games,” Texas’ Tom Herman said, “a lot more people have a lot more time on their hands than I do. We’re trying to take care of our own business.”

The Big 12 can say it’s early, how we’re barely in October, but it may well be cannibalizing itself because there is no super team in the league. OU’s fighting another subpar defense, lesser running backs and a talented but raw quarterback. Texas has its own defensive issues, crippling penalties and turnovers and a severe lack of consistency.

There are some other good teams in the league, but you’d have better luck selling masks at the White House than that premise. Such bold talk will be drowned out after Iowa State and Kansas State lost to Group of Five teams — albeit good ones — and Oklahoma State barely escaped Tulsa in Week 1. All results just killed Big 12 credibility.

The die was cast, and the popular theory is that the Big 12 is dead.

We agree to disagree, but national noise will be louder than any dissent unless a 10th-ranked Oklahoma State (3-0) wins out or Iowa State (2-1) or Kansas State (2-1) runs the table here on out.

“I don’t have any idea,” OSU’s Mike Gundy said. “We have the ingredients to get to double-digit wins here, but we’re a long ways from that. Everybody out there has an opinion based on social media, more people than should.”

The preseason prediction here was the Cyclones would top the Cowboys for the league crown. Neither OU nor Texas, it said, would even make it to the final game, and that’s a distinct possibility since both are showing more warts than wins.

Remember, it is the Big 12, however. Now we all know there aren’t a dozen teams in this math-challenged — and reputation-challenged — league. But nor is it the Big Two either, much as it often appears.

After all, it’s only been six years since the CFP folks shafted the Horned Frogs and Baylor Bears, co-champs of the Big 12 in 2014 even though Baylor won the head-to-head matchup in a controversial game and TCU looked like the superior team down the stretch. They both got dissed badly and were egregiously omitted from the Final Four because they’re not brand names.

The Cowboys? Remember them? They’re 3-0, improving by a mile every week, getting healthier and in position to dictate half of who shows up in Arlington in December.

But the conference has done this to itself. It’s entrenched the idea that as OU goes, so too the Big 12 goes. We used to say OU and Texas rule the roost, but the Longhorns haven’t been crowned champions since 2009. This is OU’s league plain and simple.

“We’ve had some really great wins here,” Campbell said. “When you play a team like Oklahoma that’s had a ton of success, you want the opportunity to go win as a program and go where they’re at. By no means are we there yet.”

History shows that the Sooners have won the league a staggering 13 of the first 22 years of the conference’s existence. The Longhorns are a distant second with three titles. The league has been so crimson-colored that Nebraska’s Cornhuskers — remember them? — have won the Big 12 the same number of times (two) as Baylor and Kansas State have.

When a team that is an established powerhouse like Oklahoma wins the league five years running, when the Sooners are the Big 12’s only representative in the CFP and when OU can’t beat anybody in the CFP once it gets invited, there’s your Big 12. OU has been to the big dance four times and is 0-4, but the rest of the league is 0-for-ever.

Still, the league isn’t bad as it’s portrayed. That includes erratic Texas as Patterson corrected a reporter who suggested the Longhorns are struggling after losing to TCU and nearly losing to Texas Tech.

“I wouldn’t say Texas is struggling,” he said. “They’re 2-1 and came within a fumble of beating us. I wouldn’t count them out just yet.”

Or the Sooners, for that matter. Not in a wacky year like this.

“I think it’ll be the most unpredictable college football year of all time,” OU’s Lincoln Riley said. “So I think you’ve just got to hang in there and keep swinging. I mean, who the hell knows what’s gonna happen in our league or on the national scene.”

For sure. Even though history begs to differ.