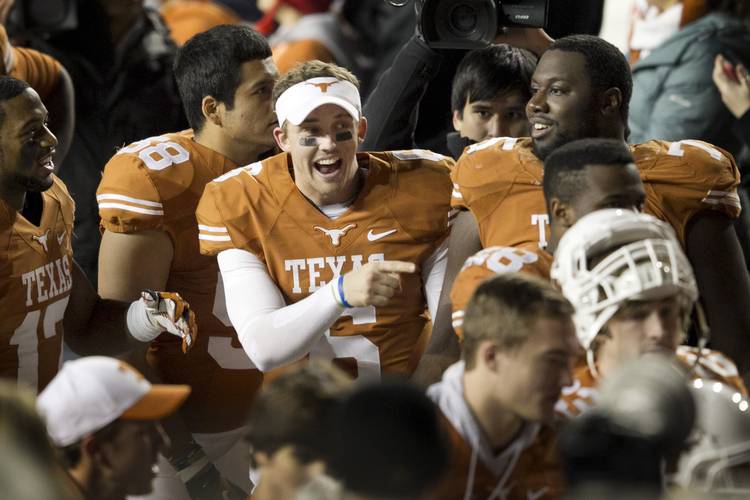 Case McCoy was as focused as he’s ever been in his life.

He’d long considered the Texas-Oklahoma rivalry the greatest in all of college football. He’d hung out at the Cotton Bowl for every blood-feud game since big brother Colt was a high school sophomore and Longhorns recruit.

Case had never quite emerged from Colt’s considerable shadow at Texas, but he had started 16 games for the Longhorns after considering Texas A&M and Florida State. And on that week in 2013, he approached his final matchup with the Sooners.

“We were 0-3 against them going into that senior year,” McCoy recalled this week. “It was super important not to walk out of there without a win.”

McCoy threw two touchdowns and played nearly flawlessly in directing unranked Texas to a decisive 36-20 victory over No. 12 OU in Mack Brown’s last season with the Longhorns. It was McCoy’s finest hour.

The quarterback who wasn’t blessed with great size or foot speed and had an unorthodox delivery but unshakable confidence can remember working on OU in the bye week before Iowa State and knew that the Sooners had always run defenses different than what they had all year. Offensive coordinator Major Applewhite gave him the option to check to a run or pass every play. Chris Whaley’s pick-six and Daje Johnson’s 85-yard punt return were huge, and McCoy was masterful.

“If I didn’t throw an interception on a screen and missed a deep ball to Marcus Johnson, we played almost a perfect game,” he said. “Listen, this game is what you’re known for after you graduate. You have the opportunity to be a Jordan Shipley and take a kickoff to the house. Forever you’ll be known for that play. This is the game where you go down in history.”

“The stakes and implication of this game set you back or catapult you onto an incredible season,” McCoy said. “This is the first time in a while at least one of these teams doesn’t have a lot at stake, but who knows. Maybe it will have.”

McCoy had scuffled for much of his time in Austin with a 9-7 record. But his name remains in the record book with the 12th-most touchdown passes (24) in school history and the fifth-longest streak of passes without an interception (126). In 2013 he threw for 1,944 yards and 11 scores. In the 2011 rivalry series finale with A&M, his huge 25-yard run set up Justin Tucker’s winning field goal.

“I honestly didn’t want to run because I’d been destroyed,” he said. “We probably had more offense on that drive than we did the entire game. I knew Tucker wasn’t going to miss.”

Both wins were huge. The one over the Aggies meant bragging rights, perhaps for a lifetime, as A&M was bolting for the SEC. The triumph over the Sooners — complete with wearing the Golden Hat and giving his dad, Brad, a hug — gave Brown a final victory in that series, too.

“I wish I’d have beat them more than I did. That’s the competitor in you,” McCoy said. “You wish you could beat OU one more time. You wish you were the Peter Garderes of the world, but we don’t all get to beat ‘em four times.”

Sam Ehlinger would settle for beating OU twice, facing the Sooners on Saturday for a fifth time. He sits at 1-3 against the Sooners and, in theory, could even become the only quarterback to play the other eight times if they meet in the Big 12 championship game in 2020 and 2021 since he’d technically be eligible to return next year. But no one thinks he will.

“I’m a big fan of his,” McCoy said. “He’s a player, a leader. He’s way more athletic than I’ve ever dreamed of being.”

McCoy, who married a Texas cheerleader and has a son, Ryder Hollis, with another baby on the way, goes to every home game at Royal-Memorial Stadium that he can. He was at the UTEP and TCU games.

“Now I’m just a fan,” he said. “Sometimes I question why I’m a fan because the heartbreak hurts just as bad as when I played. But I’m a fan of those guys, win, lose or draw. But they don’t know how lucky they are to get to play here and what this is setting them up for.”

His playing days — along with maybe the greatest surname in Longhorns history this side of Street or Campbell or Shipley in terms of multiple legacies — set him up for success in another arena. He uses the same stuff he relied on as a quarterback in his new chosen field as one of the top commercial real estate brokers in Austin at HPI Real Estate Services & Investments.

“If there’s one thing I can say about the McCoys, they’re tenacious and world-class competitors,” said HPI founding partner Dick Anderson, himself a former defensive tackle at SMU. “He’s extremely sharp. When we look for people to hire, we’d rather have tenacious competitors than someone who went to Harvard and had a 4.0 GPA.”

“The characteristics Case exhibited as a quarterback have clearly carried into his early success in commercial real estate,” said Connor Greissing, managing director at Stream and a former lacrosse letterman at power Johns Hopkins. “I tend to believe sports played a role in my early commercial real estate success. It is an industry that is somewhat built for the ex-athlete. I just helped a family friend, former Michigan State quarterback Connor Cook, land his first CRE job.”

For a kid out of Graham who came to Texas without a clue as to what he might do after football, McCoy has excelled in his field to the point he was just promoted to partner at HPI Tenant Advisors after six years.

“His work ethic ingrained by his parents, his dad’s coaching and UT football regimen, his personality and his smart, creative ideas have jelled to make him one of the best in the city,” said Jeff Pace, HPI executive managing director. “He was a natural leader for the Longhorns, and that mindset has served him well in business.”

McCoy sees a ton of carryover from his days as a quarterback. He got his degree and his commercial real estate certificate at Texas after just two-and-a-half years.

McCoy finds it a perfect profession for him.

“Thank goodness I found something I’m good at,” he said. “I love it.”

He finds much the same euphoria over closing a deal like his very first with Vista Solutions Group as he does in beating OU or A&M.

“I told them I’d pull on any jersey of a team that I didn’t play,” McCoy said. “It just happened to be Arkansas. That rivalry wasn’t as meaningful to me. The movie gave me a whole new appreciation for the opportunity I got at Texas. I asked James’ son tons of questions about his dad. But they never called me back and asked me to do it again.”

He found another calling that suited him even better.