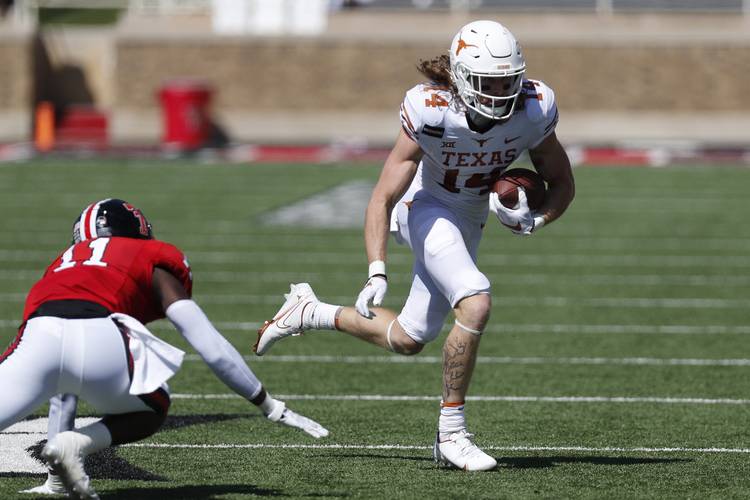 Texas wide receiver Brenden Schooler makes a move after a reception during the first half of an NCAA college football game against Texas Tech, Saturday Sept. 26, 2020, in Lubbock, Texas. (AP Photo/Mark Rogers)

It’s a rare character trait, frankly, but one that’s unmistakable.

How many players can transfer in late August, learn a new offense and still be ready for the season opener in two weeks?

“A lot of guys can’t even learn the whole offense down with extreme detail over a whole season, let alone in two weeks,” quarterback Sam Ehlinger said.

Schooler not only learned the outside receiver position, the coaches saw they were thin inside and asked him to learn the slot, too. Granted, it wasn’t perfect, but the graduate transfer proved he’s a quick study. In three games, he’s made 10 catches for 123 yards and has already scored twice.

“For him, it was full speed ahead from jump,” offensive coordinator Mike Yurcich said. “It’s been up and down with how he’s been able to function from a missed assignment standpoint, and now I think with time he’s going to be able to play either inside or outside with much more consistency moving forward.”

So just to recap, Schooler went from arriving in Austin to being Texas’ second-leading receiver in the span of about one month. That has nothing to do with how many stars a recruiting service puts by your name.

“I really appreciate the effort that he’s put in, the attention to detail, really diving in his playbook,” Ehlinger said. “He’s taken ownership of it. And he’s been huge for us. I’m really glad that we got him.”

Schooler has had some help. Receivers coach Andre Coleman isn’t out there alone. Schooler credited graduate assistant John Miller, who works with the receivers, as a huge help. “I can’t thank him enough for taking the time out of his day to have me ask him questions and just go over plays and have him signal me the formations,” Schooler said.

Diving in his playbook. Asking questions. Leaning on the graduate assistants to learn the formations. This is what football professionalism is all about.

“It’s been fun watching him assimilate himself into our family,” Herman added. “And we’re really glad we have him.”

Originally from Dana Point, Calif., Schooler was a first-team All-Pac-12 receiver at Oregon. It stunned fans in Eugene when he announced he was transferring after last season. Schooler missed the first four games of 2019 with a foot injury and wanted to play a full season as a graduate transfer.

At Oregon, he caught 43 passes for 521 yards and four touchdowns. Most of those were thrown by his roommate, former Ducks quarterback Justin Herbert, who is now with the San Diego Chargers.

Schooler ended up transferring to Arizona so he could play with his brother Colin, a linebacker with the Wildcats. Playing together during the 2020 season would have made for a pretty cool story, one they would tell family members about forever. Then came the pandemic.

Once the Pac-12 canceled the season, the brothers were left scrambling. “We were just like, ‘Whoa, we’ve got to go find somewhere to play,’” Schooler said. “We both don’t want to wait longer to play or wait an extra year.”

Back to the transfer portal. Colin Schooler ended up at Texas Tech; Brenden chose Texas. Colin actually tackled his brother and talked a little smack when the two teams met in Lubbock on Sept. 26.

Schooler was at Arizona long enough that he had already learned the Wildcats’ offense. That had to be scrapped. Now he’s on his third college offense in one calendar year.

“I’m still learning, still learning from week to week, still absorbing, trying to be that sponge, just absorb everything I can,” he said.

Asked what experience he can share, Schooler said it’s more about trying to be “that old head in the room where I can help shed some light” on situations where a younger receiver might be struggling.

Schooler now has a pretty cool story to tell himself. He’ll be one of the few players who can say he caught passes from two of the best college quarterbacks in this era.

“I’ve had a great opportunity to play with two great quarterbacks in my career,” Schooler said. “Sam and Justin are both just great, great competitors. They love the game, they want to win, they want to get better. They’re not in it for what football brings them, but they’re in it because they love football.”

And any quarterback will start looking for someone who they know is in the right place at the right time.

How long did it take him to develop a rapport with Ehlinger? “I would say it happened pretty quick,” Schooler said. “Sam’s a great quarterback, got a great arm. There wasn’t really ever a time where he was missing me or not where I needed to be at a certain time.

“He’s going to know where the receivers are supposed to be,” he added. “So that’s been a huge beneficial factor for the connection that we’ve been developing and are going to continue to develop.”

That’s what being a football professional is all about.

Bohls: On the line in Dallas? Just Texas’ season, CFP hopes and maybe the direction of the program