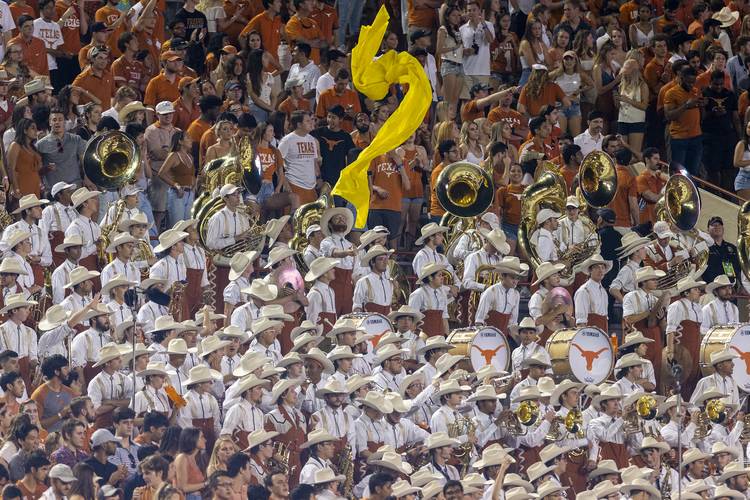 Let’s turn the eyes of Texas onto all those flags littering the ground. The coaches may change, but referees still earn a full day’s pay working UT games.

Texas averaged 6.4 penalties per game in 2015. At the time, Charlie Strong said, “We do it to ourselves.”

The next season, things got worse as the Longhorns averaged 7.1 penalties. “They’re penalties that are really costing us,” Strong said midway through 2016, “and they’re costing us big.”

Tom Herman took a hard-line approach when he arrived in 2017. But Texas committed 11 penalties for 117 yards in that infamous debut against Maryland. “Why can’t we get out of our own way?” Herman wondered aloud after the 51-41 loss.

Herman’s teams have been some of the most undisciplined groups in UT history. The 2017, 2018 and 2019 teams hold three of the top five spots in the UT record book for penalty yardage. Fortunately, this season has fewer games, because if this was a typical 12-game slate, Texas would be on pace for 1,000 penalty yards.

“I think you’re seeing it all across the country, but that is not an excuse,” Herman said Monday. “We’ve got to make sure that we’re the exception and not the rule, and that we play a cleaner brand of football when we’re out there on Saturdays.”

Penalties are up in the Big 12 this season. Five teams are averaging at least 9.5 flags per game, an unusually high number compared to previous years.

Some of that could be credited to officiating crews not working together this season because of panemic adjustments. Officials are like a team, too. When you work with the same people each week, you know their tendencies, strengths and weaknesses. This year, crews are assembled somewhat on their geographic proximity to the stadium.

Officials had a terrible day working the Texas-TCU game on Oct. 3. Twenty-six penalties were called in total. Many were justified, but some were ticky-tack.

Still, the Horns continue to hurt themselves week in and week out. Texas had 11 penalties for 101 yards in last Saturday’s four-overtime loss to Oklahoma. Herman’s club has now drawn double-digit flags in three straight conference games.

One is an aberration, two is disturbing but three is a trend. This is simply an undisciplined team.

“I think they all need to be taken individually and see why and how and what,” Herman said Monday.

It won’t take long to dissect some of them.

Nowhere in the game of football, from Pee Wee to the NFL, are you allowed to shove a player in the back. And yet that’s exactly what senior center Derek Kerstetter, a team captain no less, did to an Oklahoma player. Quarterback Sam Ehlinger has just run for 15 yards to the goal line on third-and-16. The Horns backed up and had to take a field goal.

Nowhere are you allowed to smack talk and shove a punt returner after the play. And yet that’s exactly what junior punter Ryan Bujcevski did, earning an unsportsmanlike penalty, after Marvin Mims’ 36-yard return. OU started at the Texas 30 and got a field goal.

You can find all sorts of mindless penalties sprinkled throughout Herman’s tenure. Mistakes are going to happen. These are amateurs, after all. But why did three offensive linemen get 15-yard penalties last year at Baylor? Why did Malcolm Roach, another senior captain, jump offside at Iowa State late in the game? Why did Ta’Quon Graham, a senior captain this season, jump offside on another fourth down situation the following week?

This program simply isn’t good enough to overcome unforced errors week in and week out. When you hear these mind-boggling numbers, is it any real surprise the program is 10-7 since the Sugar Bowl?

“I think they’re all different,” Herman said. “Some come from an over-exuberance of trying to do too much. Some come from a lack of attention to detail and your technique. But they all need to be addressed singularly.”

So what should Herman do? This isn’t the NFL, so he can’t fine players. All he can do is continue to harp on mistakes, maybe call players out in front of the whole team. Heck, have the whole team doing stadium steps or up-downs?

“Guys that that commit foolish penalties will be punished,” Herman said. “I’ve never been in a program where we’ve done that before. Some of the new coaches have been, and so moving forward, we’ll punish foolish penalties.

“It’s the only thing left that we know how to do,” he added. “We have educated, we have pleaded, we have, again, till we’re blue in the face.”

At this level, players should be held accountable, too. Lacking that, all frustrations are directed at the coach. Do that long enough and it shapes the narrative about what people think about the coach, too.

“These are penalties that, like in Derek Kerstetter’s case, losing your wits for a split second and it winded up costing us,” Herman said.