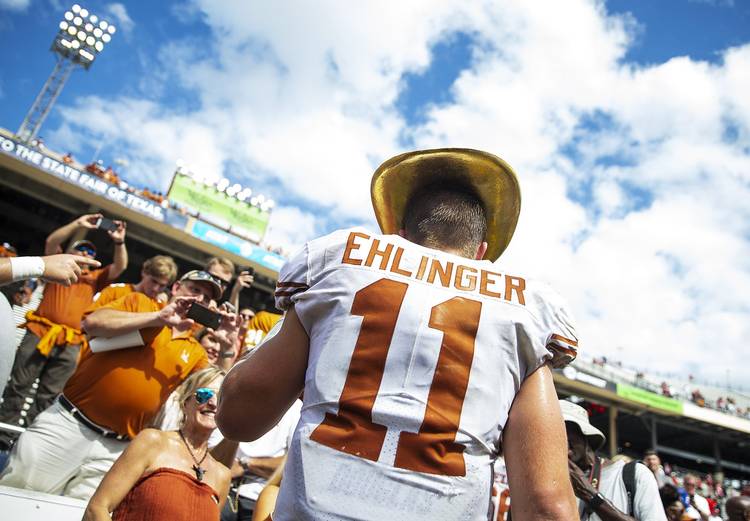 The anguish from his Texas team’s 53-45 quadruple-overtime loss to Oklahoma was still fresh on his mind as well as deeply embedded in the hearts of Longhorn Nation. A week later, Tom Herman is frantically searching for answers.

For springing the Longhorns’ bottled-up run game. For fixing the kicking woes and putting an end to senseless penalties. For inspiring a defense to get more stops.

And — this is the most perplexing — for finding an identity.

Shockingly enough in Year 4 of his regime, the Longhorns really don’t have one unless you consider it one based on sloppy football, disturbing, foolish penalties, special teams breakdowns and more.

It says here he should just ride Sam Ehlinger’s coattails. Just hop on his cape and ride the senior quarterback as far as he’ll take you. It’s simple as the 11 on his jersey because he’s truly the only thing Herman can count on.

Should offensive coordinator Mike Yurcich come out with an even-faster, snap-within-10 seconds attack and allow Ehlinger to throw 60 times? Or 70? Let him throw till his arm falls off. He wouldn’t object. Heck, if his arm did fall off, he’d pick it up and jog off the field with it and reattach it with super-glue.

In the Cotton Bowl, he threw 53 times against OU for 287 yards and two touchdowns. But if you factor in his six sacks and, by my count, eight scrambles for 96 yards and a touchdown, he effectively dropped back and intended to pass 67 times. But that was in four overtimes.

But it’s clearly what Texas does best.

So is that what Herman is at least considering hitching his wagon to?

“A little bit, yeah, I think,” he said Monday. “I think 50 or 60 (passes) might be a little bit of an exaggeration. But I know that every great championship team that has been around, including the one in our league that’s won the last five years, has had a very formidable running attack.”

He’s right about that. Oklahoma clearly runs the ball as well as any program in the nation when, of course, it’s not hoarding Heisman trophies for its quarterbacks. Nice to have both threats if you got ‘em.

And if you look at the teams that historically reach the Final Four, you’ll know that they pretty much all incorporate tremendous running attacks whether it’s LSU’s Clyde Edwards-Helaire or Clemson’s Travis Etienne or Alabama’s Derrick Henry or Josh Jacobs.

It helps if you can run. A lot. No question. And you can’t discard a running attack. But if you haven’t had a running back top 89 yards in a game yet, what do you have to lose? Besides, no one is confusing this Texas team for a champion, not at 2-2 overall and 1-2 in Big 12 play.

So just who is Texas? Other than a program in search of consistency it can rely upon, it’s become known for fits and starts, big-time wins over Georgia, OU (once) and Utah and even bigger big-time losses to Maryland (twice) and TCU and Baylor, off-the-field controversies like the polarizing “Eyes of Texas” issue and yet another coach under fire.

Now 44 games into his tenure, one would think Herman would have long ago established a model for his teams like most programs.

Alabama? Nick Saban’s bunch will beat your socks off and almost always with a hellbent defense that will crush your spirit and make you one-dimensional and often no-dimensional. And set-apart receivers like Julio Jones, Calvin Ridley and Amari Cooper.

Kirby Smart is always going to stress in-your-face defense for his Georgia Bulldogs. Mike Leach has his trademark Air Raid offense and quirky press conferences. Lincoln Riley’s Oklahoma teams will put up 50 on you before you sneeze. But maybe give up 51 if it’s in the College Football Playoffs. Oh, and he’s got the patent on Heisman quarterbacks.

If you want to resonate with recruits, if you want to impress players from beyond your borders, you’d better have a clear identity you can sell. You must have a very obvious picture of what you want to do.

Herman is tackling a big image problem, among other things.

He has yet to completely embrace — or at least establish — an identity. He’s tried. But it hasn’t worked. He’d love for it to be a balanced offense with an uptempo attack and a shut-down, aggressive defense. That hasn’t exactly been working out all that hot. That’s why he hired seven new coaches in the offseason.

That’s especially true this season when the offense has become a one-trick pony with Ehlinger firing away at will and the defense having not gotten any better with the change of coordinators, at least through four games.

Herman seems hesitant to go all Air Raid. Hard to blame him. He’s still committed to the run.

“And are we are we a good passing team right now? Yeah, we’re pretty good. Sam is elite. We’ve got receivers that are developing a lot of people.”

So why not go full-board for half a season and mix in whatever runs that can be successful? Texas has really good backs in Keaontay Ingram (if fumble-prone) as well as Roschon Johnson and Bijan Robinson, but the latter two are banged up. But if all three are unavailable or carry a risk, the Horns can always shift slot receiver Jordan Whittington to the backfield and still throw to him as well. Herman’s got a bus stop full of talented receivers, just no alpha like Devin Duvernay.

“We’re a very inexperienced group at wide receiver that is a work in progress,” Herman said, discounting that Brennan Eagles is a junior and Tarik Black and Brenden Schooler are grad transfers. “We’ve got a lot of areas to improve upon offensively. But we do know we’ve got a quarterback that can throw it. But you’ve got to be able to run the football efficiently to win championships.”

At this point, however, we’re not talking championships in 2020. This is about the short-term.

For now, the running game is broken. Of Texas’ 28 called runs against OU, 15 went for 3 yards or fewer. Six  resulted in zero yards or negative plays.

Hardly a championship model by any stretch.

So free Sam. Let him turn into Slinging Sammy and see how that does.

What can it hurt?