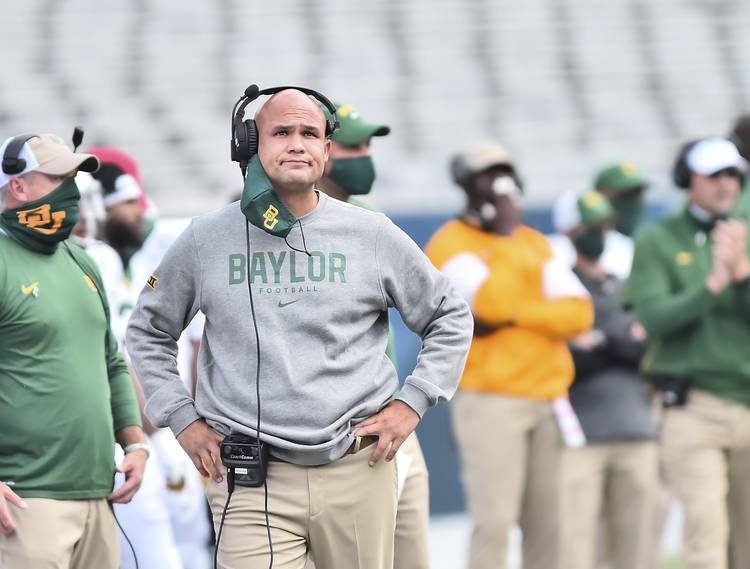 Baylor head coach Dave Aranda looks on during a game against West Virginia , on Oct. 3, 2020, in Morgantown, W.Va. (William Wotring/The Dominion-Post via AP)

Our strong start in September was mostly erased following a three-week span in October. Craven’s Corner started the year 14-5. We now sit at 21-19 thanks to an atrocious three weeks betting on NFL games. We’re 1-8 at the professional level in October with a 6-6 record in college football during that span.

Oklahoma -6.5 over TCU: It feels like the week that Oklahoma puts it together for the first time. The Sooners had an off week after beating Texas in a four-overtime contest in Dallas. TCU struggled the last time out in a loss, benching quarterback Max Duggan a week after a stellar performance in a win over the Longhorns. Oklahoma’s Spencer Rattler needs to take care of the football. Even with a turnover or two, the Sooners should be too explosive.

Iowa ML (-173) over Purdue: Big Ten football is back and we’ll capitalize by taking Iowa for the win. Forego the points because this game should be unpredictable considering the wild offseason and postponement of the season. Iowa is the better team and is usually solid in openers. Purdue is without star wide receiver Rondale Moore, its most explosive player on offense.

Baylor +8.5 over Texas: I simply don’t trust Texas to win a game by double digits over a Big 12 opponent unless it’s Kansas. The Longhorns just aren’t good enough to demand an 8.5-point spread, especially without much of a home-field advantage due to the restrictions placed on attendance. Texas should be fired up and rested after a bye week, while Baylor has only played two games all season due to COVID-19. Give me Baylor to keep it close because I can’t put money on Texas in its current state.

Michigan ML (-150) over Minnesota: Give me Michigan to win a close game in the premier matchup this week in the Big Ten. The Wolverines are slight favorites, but we’ll forego the point spread and bet on Michigan to win the game. This feels like an important year for Michigan coach Jim Harbaugh. His offense needs to show big-play potential to have a shot to compete for a conference title.

Iowa State +3.5 over Oklahoma State: A quarterback controversy is brewing in Stillwater and that could spell trouble for Oklahoma State. Spencer Sanders was injured in the opener. He’s been replaced valiantly by freshman Shane Illingsworth. Spencer is healthy again and head coach Mike Gundy is non-committal over his plans, suggesting both could play against Iowa State. The Cyclones know their leader is quarterback Brock Purdy. The haziness can’t help the Cowboys concentrate on their opponent, providing Iowa State with a great opportunity to pull an upset on the road.

West Virginia ML (-154) over Texas Tech: Texas Tech benched quarterback Alan Bowman the last time the Red Raiders played. West Virginia, conversely, is 3-1 and a pleasant surprise in the Big 12. My money is on West Virginia to go into Lubbock and win on the road against a Red Raiders squad without an identity on either side of the ball.

SMU ML (-134) over Cincinnati: SMU might be the best team in Texas and the Mustangs get another chance to win a marquee game in the American Athletic Conference against Cincinnati, a contest between two ranked teams. SMU quarterback Shane Buechele is the best player in this game, so our bet is on SMU to win outright.

Bengals +3 over Browns: Home underdogs tend to do well in the NFL. Cleveland was embarrassed against the Steelers, resulting in quarterback Baker Mayfield being replaced. The Bengals are in great shape for the future with rookie Joe Burrow looking the part through his first month in the NFL.

Titans +3 over Steelers: The best win of the season for Pittsburgh came last weekend with the throttling of Cleveland. The Titans are a much better team than any of the other squads Pittsburgh has beaten early. Tennessee is a hard-nosed, scrappy team that reminds me of the Steelers teams that I grew up watching. Titans running back Derrick Henry is the difference maker in this game.

Packers ML (-200) over Texans: Aaron Rodgers and his Packers won’t lose in consecutive weeks. Green Bay was humbled in a loss to Tampa Bay. The Texans don’t have as much to play for with a 1-5 record.

Seahawks ML (-176) over Cardinals: Russell Wilson is determined to claim his first NFL MVP trophy and the Cardinals are his next victim. Add in the fact that Seattle is coming off of a bye week and Arizona played Monday.

Buccaneers ML (-154) over Raiders: Tom Brady is beginning to find his groove in Tampa Bay, but is the defense that was most impressive in the win over Green Bay. The Raiders are an inconsistent team that is capable of pulling this upset, so forego the points and simply bet on Tampa Bay to win.

Bears +5.5 over Rams: Monday Night Football provides us a great matchup between NFC contenders. I trust the Bears and quarterback Nick Foles to cover, even if I think Los Angeles wins the game. Give me Chicago to keep it within five points thanks to a strong defensive effort.