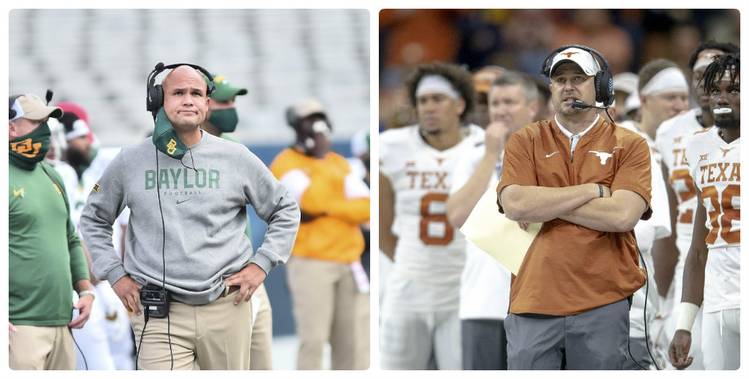 Before they became household names as coaches, Tom Herman and Dave Aranda were a couple of freewheeling college football players at tiny California Lutheran University in Southern California 25 years ago.

Aranda, now the first-year head coach at Baylor, was a bruising linebacker who first met Herman, in his fourth year at Texas, on a 1995 recruiting trip after playing junior college ball in San Bernardino. Herman, a wide receiver who had transferred to Cal Lutheran from UC Davis in search of more playing time, spent as much time in the training room — he has had an astonishing 13 knee surgeries — as he did on the field, but had established a reputation as an all-conference pass-catcher who owned the clutch gene.

They will meet for the first time as opposing head coaches on Saturday.

Advertisement
“We were playing Occidental College and we needed to get a big first down, and Tom makes the catch,” Aranda told reporters on Monday. “He was always that guy. When you needed something, it always went through him.”

Herman also was a BMOC who already had developed a cult following, on and off the field. He hosted Aranda on that 1995 recruiting visit and made an immediate impression.

“He’s talking to everyone and smiling, making jokes,” Aranda recalled. “This guy’s like the mayor.”

It gets better, or worse, depending on your viewpoint.

Aranda’s high school sweetheart, Dione (now his wife), also was a student at Cal Lutheran and a member of the women’s basketball team, so of course Dave was at her games. His most vivid college basketball memory — besides watching Dione play, of course —  was Herman serving as the emcee, seated courtside.

“I would show up in the gym, and there’s Tom — and he’s announcing it,” Aranda said. “Then it would get to halftime, and the lights would turn down, and they’d have these strobe lights and Tom is on the table dancing. So it’s like, ‘Wow.’”

A brief glance at the school archives reveals Herman lettered in 1995, but Aranda, beset by numerous shoulder problems, never quite got going as a player there. He eventually took on a role as a student undergraduate coach, a great decision, as it turns out.

“I think all of us players at the time knew he was destined for greatness,” Herman said on Monday.

They lived together at Lutheran, and as their legends grew, the accepted story is that they were roommates, though Herman said in later interviews that he spent only a couple of weeks on Aranda’s couch.

Over the years, they remained buds.

While both worked as graduate assistants starting in 1999 — Herman at Texas, Aranda at Texas Tech — it wasn’t unusual for Dione to make the drive to Austin to hang out with Herman and his girlfriend Michelle, who would eventually become Herman’s wife.

After Herman landed his first paying gig in 2001 — the special teams coordinator at Sam Houston State — he drove 10 hours from Huntsville to Lubbock to go over drills with Aranda.

Theirs is a friendship that has spanned across parts of four decades, and when you’ve been around one another for that long, playful banter is bound to happen.

“(Now) he gets up at like 2:45 in the morning and goes for a four-mile run and a three-mile bike ride and does yoga and all that stuff,” Herman chided. “I don’t know all of that to be fact. I’m kind of ribbing him here, and I’m sure he will appreciate it.”

If we’re keeping score here, Herman has a 3-1 advantage head-to-head, starting with a 1999 UT win over Tech when they were grad assistants. Once he became a full-time, tax-paying coach, he beat Aranda’s defenses twice as the offensive coordinator at Ohio State, including a 59-0 thrashing in the 2014 Big Ten title game en route to a national championship.

Aranda, a man of much fewer words than Herman, earned a measure of revenge last year as the defensive coordinator for LSU, which topped Texas in an Austin in a September thriller on its way to a national title.

The issues surrounding Saturday’s first meeting as head coaches are unique in that football isn’t the only major topic of conversation. In the clunker that has been 2020, it makes perfect sense.

As if Herman didn’t have enough problems with a team that has given up 50-plus points twice this season — both were overtime games — and an offense that hasn’t been able to put a consistent run game together, he has been besieged with questions regarding the never-ending saga of “The Eyes of Texas.”

Quarterback Sam Ehlinger on Tuesday described the reaction to his staying behind on the Cotton Bowl field for the playing of “The Eyes” after the loss to Oklahoma as “a misunderstanding” when viewed through the image of all but only a couple of his teammates having left for the locker room. These conversations are being had as the Horns (2-2, 1-2 Big 12) prepare for yet another crossroads game in a season that has been a huge disappointment so far.

Meanwhile, Herman is left to try and explain the state of his locker room while insisting that his team is unified and that the administration and all coaches on campus are “completely aligned.”

While Herman is trying to figure out who will remain on the field and who will book after the game, Aranda, in his first season in Waco, is just hoping his team can see a field. The Bears have played only two games and have endured three postponements due to COVID-19 concerns. He shut down all football activities on Oct. 8 and the team had its first practice since then on Sunday.

Both teams underwent virus tests Wednesday per Big 12 protocol and will undergo additional tests on Friday. It goes without saying that a lot can happen between now and a 2:30 Saturday kickoff.

As for the game, the matchup intrigues on paper because Ehlinger and Charlie Brewer — both Austinites — are two of the most experienced quarterbacks in the country. The stakes are high, especially given Texas’ struggles.

Texas opened as a 14-point favorite but that has dropped to 8.5, but should have a sizable edge on paper. But the Horns lost (to TCU) the last time they were favored at home. It’s a team that plays to its competition, which should give Baylor a fighting chance.

Either way, former Ventura County residents Herman and Aranda are relishing the goal of earning bragging rights in their reunion. Old teammates are now opponents while having remained lifelong friends bound by some great times as kids on the West Coast.

“I think it’s really cool that 20% of the head coaches in the Big 12 are Cal Lu graduates,” Herman said.