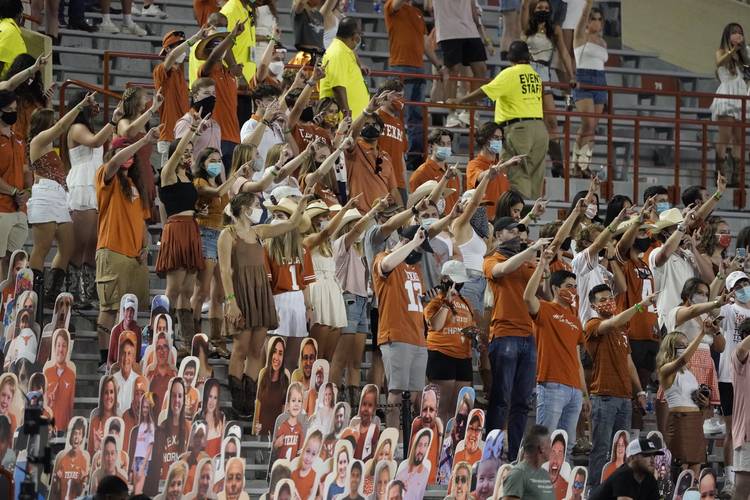 In this Saturday, Sept. 12, 2020, file photo, fans join in singing "The Eyes of Texas" after Texas defeated UTEP 59-3 in an NCAA college football game in Austin, Texas. AP Photo/Chuck Burton

What a week at Texas, where every day is a new adventure.

The steer got sued. That was an interesting Monday night call.

“I’m an Aggie myself,” Nick Wagner’s attorney Jon Powell said. “When Nick contacted me, it was of immediate interest for an Aggie to sue Bevo.”

On Tuesday, the quarterback — you know, the one who truly bleeds orange — had to explain why he stayed for the school song after the Oklahoma game two weeks ago. Sam Ehlinger grew up singing that song with his late father. “All of my teammates understand that, and they know my perspective,” he said.

Will the rest of his teammates stay on the field for the post-game singing of “The Eyes” after the Baylor game on Saturday?

“I can’t speak for 100 different guys. I’m not going to answer that,” Ehlinger said. “It’s pretty difficult to determine what’s going to happen in five days in the minds of 100 different people.”

On Wednesday, Longhorn Band members tried a new tune — and got their reeds snapped in two.

Word leaked out that band director Scott Hanna conducted an internal survey to see who was comfortable playing “The Eyes.” Enough band members responded that they weren’t, and so the band couldn’t perform. Suspended is another term one might use. It’s unclear if the band will perform at Royal-Memorial Stadium again in 2020.

You can’t join the Rolling Stones and then refuse to play “Start Me Up.”

RELATED: Texas regents: ‘The Eyes of Texas is, and will remain, the official school song’

All of this is happening on UT’s self-proclaimed “Free Speech Week,” no less. The airing of grievances now extends far beyond the campus’ West Mall, it seems.

UT President Jay Hartzell issued a statement late Wednesday that left no doubt where he stands. “The Eyes of Texas will be played this weekend as it has been throughout this season — and it will continue to be played at future games and events,” he said. No wiggle room there from the Tower.

Things are so out of whack, even the marketing and public relations departments are getting their wires crossed. UT sent out a press release that the team would wear all white uniforms Saturday in honor of the 1970 national championship team. Texas hasn’t worn all white uniforms at home since 1950.

Then, hours later, another email went out. Turns out, the all-white look is in honor of the 110th game being played in Texas-Baylor history. “We will indeed be honoring the 50th Anniversary of Texas’ third National Championship team later this season” against Iowa State on Nov. 27, the press release stated.

Oh, dear. If any coach wants to announce some bad news or shove somebody into the transfer portal, #nowsthetime.

Seriously, what the hell is going on around here? Look, it’s well known how Texas can create high-level tabloid drama, but this “Eyes” issue is something else. Coach Tom Herman should get style points for his subtle dig on Monday: “I think, especially around here, if you start paying attention to the noise, the Internet, the Twitter and the constant bashing after losing a four-overtime ballgame, then there are pitfalls to that.”

Herman was talking about his 2-2 Longhorns, a group that’s smack dab in the middle of all this, to be sure.

If Texas was 4-0, this “Eyes” business would be a secondary topic. It’s not as cut and dry as some of you would like to believe, though. As someone explained to me this week, it’s hard to stand out there once you truly know how that song came to be.

On the UT craziness scale, there are well-established ranges. Tweeting at halftime while your team is getting blown out, that’s like a one or two. Slicing up your hand by hitting something other than an Oklahoma Sooner after a Big 12 championship game loss would be a three or four.

Going recruiting in Tampa, Fla., after news breaks that you might soon be fired feels like a six or seven. Although to be fair, Andrew Beck was a standout tight end. Flipping off the Longhorn Network cameras on national signing day is a hard seven, for sure. Maybe even a soft eight.

Flying to Tulsa to beg a Group of Five offensive coordinator to come work at UT is definitely an eight. Running onto the field looking to fistfight Mike Gundy is a nine.

Losing to Kansas is an immediate, automatic, no-questions-asked 10.

Strictly in football terms, “The Eyes” controversy has become a real distraction, no matter where you stand on the issue.

“I would definitely say it’s been more of a distraction,” defensive tackle Ta’Quon Graham said. “I thought we were past this point, past the issues surrounding the song. I thought we were just focusing on the season.”

That’s where Texas administrators want you to focus — on the season. But even that’s no sure thing. What if I told you Texas had the nation’s No. 1 scoring offense (49.5 points per game) but still had back-to-back Big 12 losses? The Longhorns are the most high-powered .500 football team in America.

And therein lies the rub for most fans. Winning should be easy, but it’s not. It was a cherished post-game tradition until it wasn’t.

Nothing ever comes easy for the country’s most cash-rich college athletic program. Why should this issue involving “The Eyes of Texas” and how to “repurpose it” or “redefine it” or whatever administrators are thinking about doing be any different?

Money can sure change coaches, and judging by my emails, some of you definitely want to. But it can’t get the athletic department out of this incredibly tight jam.

“They’ll make you rich,” he said, “but you’re gonna earn every damn penny.”

And just think, this week isn’t over yet.