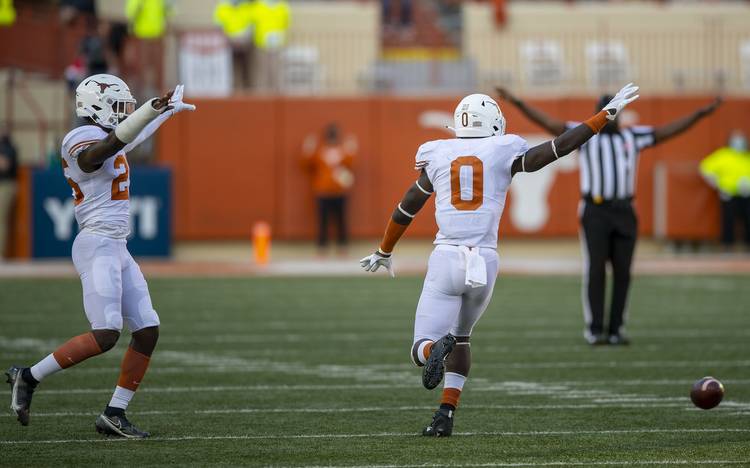 Texas defensive back B.J. Foster, left, and linebacker DeMarvion Overshown celebrate a fourth down stop against Baylor in Saturday's 27-16 win at Royal-Memorial Stadium. (Ricardo B. Brazziell/American-Statesman)

That’s the first time we’ve uttered those words in nearly a month.

And the Horns won on Saturday because of their defense.

That’s the first time we’ve uttered those words since … well, let’s just say it’s been a while.

The Longhorns (3-2, 2-2 Big 12) finally found an offense they could lick. Baylor’s Charlie Brewer has problems up front with his offensive line, but the quarterback didn’t play badly. Saturday was more about how Texas’ defense met the challenge again and again facing one of the most experienced signal callers in the country.

The 27-16 win got the Horns above .500. It isn’t going to wow AP top 25 voters; the Horns will have to string together a winning streak of some sort, starting with next week’s road test against Oklahoma State, to creep back into the realm of national respectability.

For now, embattled defensive coordinator Chris Ash had his look-at-what-we’re-capable-of moment for a defense that will face a much more dynamic offense next.

“It’s really big,” Longhorns coach Tom Herman said. “To finally have two really weeks of practice and translate it to allowing them 64 yards rushing, 316 yards of offense, it provides a lot of confidence.”

The vital statistics: A big win, a scant 16 points allowed, and the one that really pops — Baylor’s 3.0 yards per carry on 21 rushes — is just what Ash needed.

“Just seeing how my teammates responded after the Oklahoma loss and how our coaches challenged us, I think they did a great job and I’m proud of that,” defensive tackle Ta’Quon Graham said.

As bad as this defense has played for most of the year, the sight of its best player — defensive end Joseph Ossai — clutching his left arm after he and teammate Jacoby Jones played the bookends in a Brewer sandwich late in the first half was one that could have proven disastrous. Team officials called it a shoulder injury, and thankfully Ossai returned to the sideline to great applause from the social distancers in the north end zone. Better yet, he was on the field for Chris Brown’s pass breakup to seal the win.

Of course it wouldn’t be a Texas game without some drama, and quarterback Sam Ehlinger’s interception in the fourth quarter gave the Bears a short field which they turned into a touchdown to cut the UT lead to 11 points with 7:37 left.

All told, a defense that surrenders 16 points in a Big 12 game in 2020 is a defense that deserves credit, especially after it was gave up an average of 47.3 points in the last three contests, two of those coming in overtime against Texas Tech and Oklahoma.

What we witnessed Saturday against an under-practiced Baylor team was Texas playing with passion and poise. The Horns got after Brewer and limited the chunk plays that have plagued them for all of last season and most of this one.

Even when the Bears tried to get tricky, the Horns took the dazzle out of their razzle. On a key third down late in the third quarter, Brewer pitched to wideout Josh Fleeks, who had a head of steam before Texas end Moro Ojomo blew up the play and teammate Juwan Mitchell cleaned it up. Baylor kicker John Mayers was wide on the field goal attempt.

It was a pretty complete game in most phases and the defense put on tape that it’s capable of getting stops when it matters. There is such a thing as a muscle memory, and we will see it if kicks in the next time we see the Horns.

They will certainly need it in Stillwater.