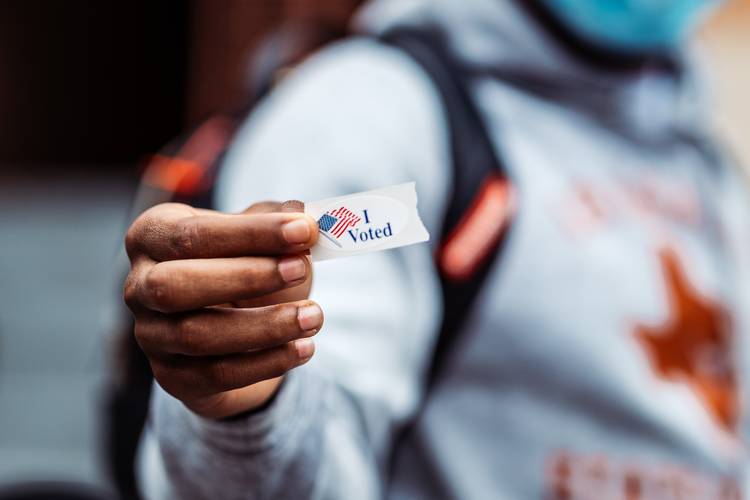 Texas athletes, including those on the football team, were encouraged to register and vote in the 2020 elections. University officials turned Gregory Gym into a polling station this year. Photo courtesy of Tony Turnquist/University of Texas Athletics

Marching to the State Capitol raised eyebrows. Forcing University of Texas administrators to address the school’s racial past raised the stakes. The uproar over “The Eyes of Texas” raised everyone’s blood pressure.

For some Longhorns, the social justice summer of 2020 was a sobering, eye-opening experience.

“Unfortunately, yes,” said Kevin Washington, UT’s director of player development. “I definitely think they lost a little bit of what innocence they had left, at least as it comes to the political realm.”

Those within the football program suddenly faced a vexing question: Now what? There was only one real logical answer. Within the confines of democracy, there’s only one true way to have your voice be heard.

Use your voice. Go vote. 🤘🗳 pic.twitter.com/lKFJOFbI2k

Texas athletics has been among the national leaders in encouraging students to register, according to the CEO of RISE to Vote, the national nonprofit group backed by the NFL and NBA that works primarily with sports teams on social justice issues and improving race relations. RISE to Vote has held several sessions on the UT campus, including one in July.

Diahann Billings-Burford said college administrators need to realize we are living in a time of revolution, whether you want to call it that or not. “Everything about this current situation is calling them to change, and people do not like it,” Billings-Burford said. “We are absolutely just seeing people that are resistant to change.”

Old-school — or just plain old — administrators need to realize “there really is no option not to be involved. There isn’t,” she added. “So you’re either involved in suppressing it, or you’re involved in supporting it. But you can’t just be Switzerland. That option is gone.”

Texas coach Tom Herman said his goal was to get every player on his roster registered to vote in next week’s election. In early September, he spoke positively about the RISE to Vote virtual event. “I know a number of guys registered right there on the spot after that meeting, and then we’ll hit it again here in the in the coming weeks,” he said.

On Monday, Herman led a group of players over to Gregory Gym so they could participate in early voting. The socially progressive coach came out wearing an “I Voted” sticker just like the rest of us do. Washington took another group to the campus polling station Monday afternoon.

Herman has said there would be no football-related activities on Election Day, and that any player who wants to vote but needs transportation would have it. The Horns will flip their normal Monday off with Tuesday next week, a team spokesman said. Big 12 basketball teams have also agreed in unison to take Tuesday off from all athletic activities so players can go vote.

Some support Donald Trump. Others will vote for Joe Biden. Does the UT program tell players which way to vote? “Absolutely not. We would never go so far as to do that,” Washington said. It would defeat the purpose.

“The point of developing is to let our guys come to their own opinions,” he added. “We’re not giving information because even coming from us, that could be bias. We’re trying to coach them up more on civil discourse. Go, listen to the other side, go listen to other people, and then come up with your own opinions and, you know, talk back and forth about them. You’ve got the strength to do something. Now you go flex it in your vote.”

It’s a stance that has resonated within the locker room.

“If you want change, you must start with voting,” cornerback Josh Thompson said. “Kevin Washington and coach Herman have set up great ways to get our voice heard in this program and actually taking time out of our schedule to get these things done. I really respect them for that.”

Washington said some players have asked about absentee ballots so they can vote in their hometowns. When it comes to down-ballot races, some Horns may not care who’s on the Austin city council or whether we get mass transit. But they may care about local issues back home.

Every parent has one request of a college football coach: Return my son in better shape than you found him. For decades, “player development” simply meant teaching 18- or 19-year-olds how to tie a necktie or wear a suit. Now, it means navigating thorny locker room issues involving race. And who makes what from their name, image and likeness is coming soon.

Quick aside: Why would anyone get into coaching nowadays? Complex race relations, complicated money issues, five-star recruits decommitting on a random Wednesday night, angry boosters, nervous bosses and sportswriters criticizing your personnel rotations and fourth-down choices? Sign me up!

Every locker room is a meritocracy. All the same rules apply to everyone, until they don’t. The star player gets more leeway than the walk-on.

“When you go through the summer, and you hear all the different things going on, there’s a lot of uncomfortable conversations you’ve got to have. And I applaud our guys for that,” Washington said. “There were people that said things, did things. There were apologies that was made, there was forgiveness that was given. It just went back and forth.

“If you can’t fight with somebody in a locker room and then go out there and play with him,” Washington added, “then you don’t actually know what it means to love somebody or be on a team.”

Say what you will about Herman’s win-loss record. That’s fair game. But there is little doubt he’s trying to teach the Longhorns how to win in life. He genuinely wants every athlete under his watch to become a productive member of society.

Right now, our society is fractured. It’s messy. It’s loud. It’s unfair at times. But this democracy is the only one we’ve got. And if you wish to be an active participant, you must vote.

“We’re going to do our part as a program to facilitate that for them,” Herman said in September. “And then it’s up to them to decide if that’s something they want to choose to participate in.”