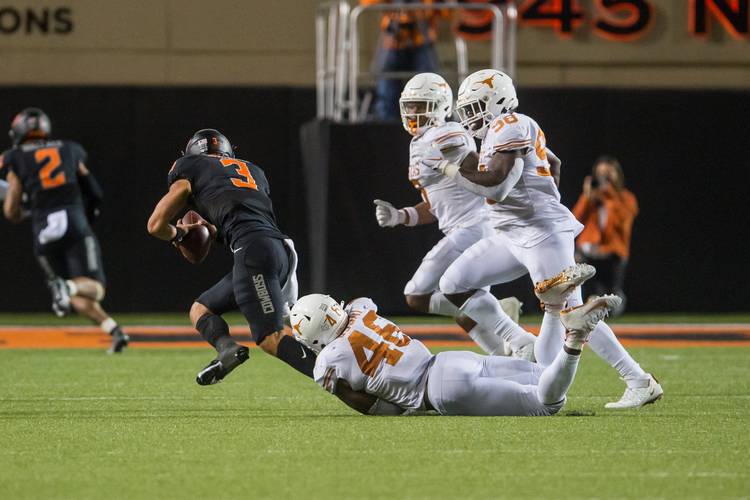 Saturday will go down as one of the greatest displays of will in program history.

Joseph Ossai, Texas’ new jack defensive end, certainly had help from his teammates in the 41-34 overtime win over sixth-ranked Oklahoma State, but it was a testament to his selfless leadership, the value of hard work and a glimpse of where the Longhorns should go moving forward.

Now, will it head that way?

Recent history lends itself to skepticism, but that has nothing to do with what went down at Boone Pickens Stadium.

Ossai, playing with a shoulder injury, gutted Texas (4-2, 3-2 Big 12) to a victory with an able assist from fellow team leader Sam Ehlinger — who was money after an uneven first three quarters — and a spirited defensive front that spearheaded a four-takeaway performance while holding former  2,000-yard rusher Chuba Hubbard to 72 yards on 25 carries.

A defensive lineman with a bum shoulder knows doing his game-day job will come with some pain. Ossai didn’t practice on Tuesday and was limited on Wednesday. He got some work in Thursday, when the Horns worked without pads, but those who know him well understood he wouldn’t miss a crossroads game, bad shoulder or no bad shoulder.

He suited up and brought it, as expected.

“Relentless,” was how line mate Ta’Quon Graham described Ossai. Graham had a sack and 3.5 tackles for loss. “Whether he’s tired or not. Even if he’s on the backside, he will be around the ball at the end of the play.”

Ossai’s  takedown of OSU quarterback Spencer Sanders on the final play provided a fitting end to a statement game, not just for the tackler who is easily the most respected defensive player in the locker room but for head coach Tom Herman, whose Longhorns weren’t expected to be unranked at this point of the season after a No. 14 preseason ranking and Big 12 title game expectations.

This was Ossai’s game and the Cowboys weren’t about to take it from him. He’s a picture of perpetual motion, a big dude who doesn’t understand the meaning of quit.  A real student of the game and one who has never shied away from being critical of his own performance when warranted, Ossai said the never-ending motor was born of a high school practice his freshman year at Conroe Oak Ridge High when his defensive line coach noticed him go half-speed on a play.

He was just that on Saturday: a game changer on a day that his team and coach were in dire need of a ‘W.’

The Big 12 probably didn’t need it as much, however. The toppling of the conference’s last unbeaten team lessens its chances of landing one of those coveted four spots in the College Football Playoff field. But that’s really neither here nor there.

This was about the Horns answering the bell and their coach being allowed to exhale on Sunday morning before they move on to West Virginia next Saturday. Texas has a chance to make some real clatter over these next few weeks, clatter that may drown out some of the recent frustrated chatter from fans.

Herman says he blocks out any talk that’s not in the locker room — he calls it outside noise — but this fickle fan base has historically reached for the brightest star in the unemployment line if a head coach showed any hint of mediocrity, and let’s face it, a 28-17 record over the past four years doesn’t scream national championship contender.

“They all count the same,” Herman deadpanned, classic coachspeak that sounds good on the surface but doesn’t land when viewed through a big-picture lens. Even after a season-saving win, some online were still clamoring for Fox studio analyst Urban Meyer. But thanks to Ossai, who finished with 12 tackles (six for loss), three sacks, a forced fumble and a fumble recovery, they may quiet down a bit and give the Horns a chance to string together some wins.

The secondary remains a head scratcher with ill-timed interference penalties and blown red zone assignments, and the 13 penalties for 142 yards is just unacceptable. That said, hope just reared its beautiful head because the Horns got that signature road win, their first over a ranked opponent in 10 seasons.

It will take this type of effort to continue to move that needle in a positive direction. Ossai is leading the charge, not just with what we witnessed on game days but from the example he has set in practice.

Herman said Ossai has two speeds: off and full. Plus, any player who comes to Herman with complaints about playing time will get the standard answer: Watch how Ossai practices and plays.

“You want to live in the limelight like Joseph Ossai and help us beat top-10 teams on the road with unbelievable performances? Go work like Joseph Ossai,” Herman said. “It’s a pretty, pretty simple formula. And I do think that all of that rubs off on the entire defense much the same way that Sam rubs off on the offense and those two guys really kind of rub off on the whole team.”

West Virginia (4-2, 3-2) will be no gimme, but the Horns should feel good about showing a national television audience that there is some defense being played in Austin.

“We understand that we need to go back to work and take it one game at a time,” Ossai said.

Work. It’s what makes him the great player he is becoming.